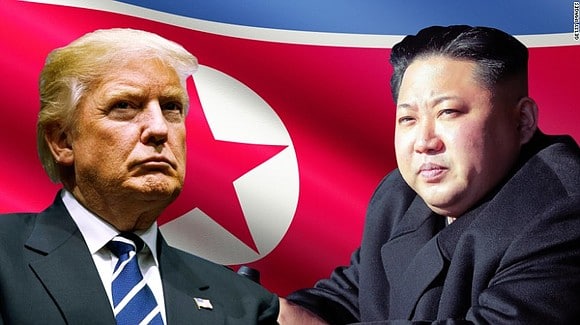 In a headline diplomatic maneuver, a meeting has been arranged between Donald Trump and North Korean leader Kim Jong-Un.

The surprise development is the outcome of weeks of talks between the two Koreas and of Trump’s impulsiveness, with the President suddenly seizing on the chance to see Kim face-to-face.

See also Podcasts: How US is Stumbling Into a Trump-Kim Meeting

After talks with Kim on Monday, South Korean envoy and National Security Advisor Chung Eui-yong travelled to Washington yesterday to confer about a possible meeting. Trump’s sudden intervention meant that negotiations suddenly turned into a confirmation of the discussion.

Chung saying the encounter would take place by May: “[Kim Jong Un] expressed his eagerness to meet President Trump as soon as possible.”

The meeting would be the first between leaders since the Democratic People’s Republic of Korea was founded in 1948.

Kim Jong Un talked about denuclearization with the South Korean Representatives, not just a freeze. Also, no missile testing by North Korea during this period of time. Great progress being made but sanctions will remain until an agreement is reached. Meeting being planned!

However, the references by Chung to “permanent denuclearization” of the Korean peninsula may indicate that, while curbing or even removing its nuclear weapons program, North Korea will be seeking a significant reduction in the US military presence in South Korea.

Chung was not scheduled to see Trump until Friday, after the envoy, South Korea’s National Security Advisor, told US officials of his discussions with Kim on Monday. However, when Trump heard about the talks, the President summoned Chung to the Oval Office and asked for a report on the discussions with Kim.

When Chung said the North Korean leader had expressed desire for a meeting, Trump immediately said he would do it and directed Chung to announce it to the White House press corps.

Chung said he first needed approval from President Moon Jae-in, who provided it in a phone call.

Trump then went into the White House briefing room to tell journalists to expect a “big announcement” two hours later at 7 pm.

Caught off guard, White House officials were scrambling over a location for the meeting. They discussed where Trump would invite Kim to come to the US. A “senior administration official” said it was likely, although doubtful that the North Korean leader would accept.

Instead, the meeting could take place near the Korean demilitarized zone, where the delegations of the two Koreas have been pursuing discussions.

White House officials had expected to deliberate for several days about a response to the proposal for direct talks. “People briefed by the administration” said little planning has been done for negotiations.

The State Department’s chief North Korea negotiator, Joseph Yun, has announced his departure, and the Trump Administration has not named an Ambassador to South Korea since it took office. The White House vetoed the nomination of experienced negotiator Victor Cha, as ambassador.