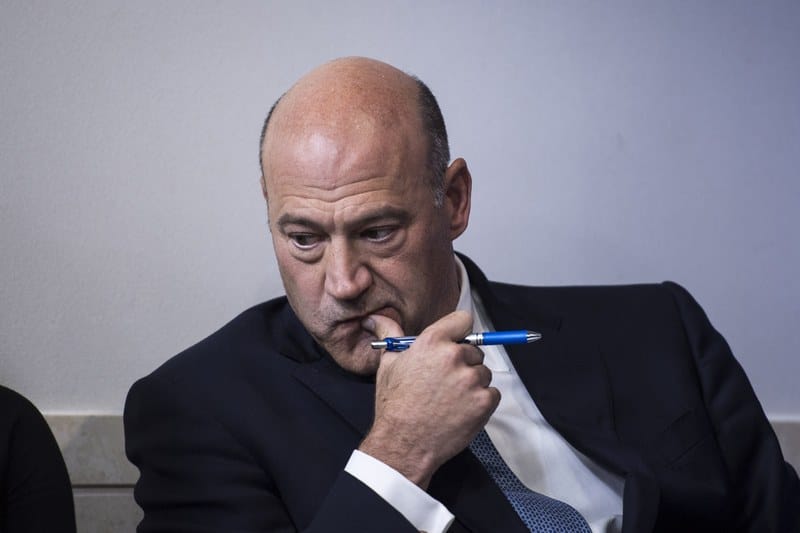 Cohn is departing after a bitter months-struggle over large tariffs on steel and aluminum. Donald Trump suddenly decided last Thursday — reportedly out of anger over the resignation of his confidante, Communications Director Hope Hicks, and frustration with Attorney General Jeff Sessions over the Russia investigation — to impose the 25% duty of steel and 10% aluminum, despite the effect on US allies such as Canada, Japan, South Korea, and the European Union.

Cohn and Treasury Secretary Steven Mnuchin had held out against the tariffs, but faced the protectionist platform of White House aide Peter Navarro and Commerce Secretary Wilbur Ross.

Cohn avoided any reference to the departure as he said he had been pleased to work on “pro-growth economic policies to benefit the American people, in particular the passage of historic tax reform”.

Trump said in a statement:

Gary has been my chief economic adviser and did a superb job in driving our agenda, helping to deliver historic tax cuts and reforms and unleashing the American economy once again. He is a rare talent, and I thank him for his dedicated service to the American people.

However, multiple sources say Trump was angered by Cohn’s announcement, calling him a “globalist” — a pejorative used by protectionists and hard-right attack sites such as Breitbart.

Cohn’s departure is likely to further unease in the business and financial communities. He was widely seen as one of the stabilizing influences in an often-chaotic Administration, and his departure leaves Trump surrounded primarily by protectionists.

More than 40% of senior officials who entered the White House in January 2017 have left.

Trump had started Tuesday by hitting back at further stories of discord within the White House, amid the Russia investigation and Monday’s erratic but dramatic statements by former advisor Sam Nunberg.

The new Fake News narrative is that there is CHAOS in the White House. Wrong! People will always come & go, and I want strong dialogue before making a final decision. I still have some people that I want to change (always seeking perfection). There is no Chaos, only great Energy!

Last night Trump said he “will be making a decision soon on the appointment of new Chief Economic Advisor”. He maintained, “Many people wanting the job — will choose wisely!”

But despite Trump’s assurance, there are no front-running candidates so far to replace Cohn, with many possibilities wary of joining the White House amid disputes and instability.

Clifford and Cohen signed the agreement after the lawyer paid her $130,000. Cohen claims the money was his and did not come from the Trump Organization or the Trump campaign.

The former CEO of a payday lending company, that had been under investigation by the Consumer Financial Protection Bureau, has asked to be considered for the top job at the watchdog agency.

When the CFPB was headed by Richard Cordray, it was investigating World Acceptance and other payday lenders. However, soon after the White House imposed budget director Mick Mulvaney on the CFPB as Cordray’s replacement last autumn, the agency began revising or rescining rules that included additional restrictions on the payday lenders.

World Acceptance announced on January 22 that the investigation had been completed without enforcement action, and it said CEO Janet Matricciani had resigned after 2 1/2 years.

I would love to apply for the position of director of the CFPB. Who better than me understand the need to treat consumers respectfully and honestly, and the equal need to offer credit to lower income consumers in order to help them manage their daily lives?

She cited the CFPB investigation as a personal strength: “I have indepth (sic) experience of what a CFPB investigation is like, and so I am in an unparalleled position to understand the effect of various CFPB actions on a company, its workforce, its customers, and the industry.”

The Administration is ending the ban, introduced by Barack Obama, on the import of elephant trophies from Zimbabwe and Zambia.

The Fish and Wildlife Service said it will now consider all permits on a “case-by-case basis”. breaking from President Trump’s earlier promises to maintain an Obama-era ban on the practice.

The decision follows a circuit court decision in December that found fault with the drafting of the Obama-era rule.

However, it breaks a pledge by Donald Trump in February, when he said in an interview that the administration’s initial decision to overturn the ban was “terrible”: “I didn’t want elephants killed and stuffed and have the tusks brought back into this [country].”

Trump’s son Donald Jr. and Eric have been photographed with their “trophies”, including parts of elephants, from big-game hunting trips to Africa.

In a possible criminal act, the Trump Organization has ordered replicas of the Presidential seal for its golf courses.

Under federal law, the seal’s use is permitted only for official government business. Misuse is a crime.

But Eagle Sign and Design said it had received an order to manufacture dozens of round, 12-inch replicas to be used as tee markers.