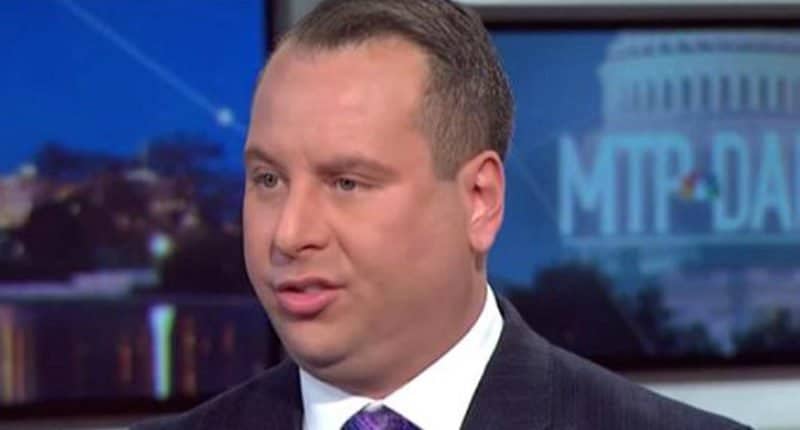 Developments on Day 410 of the Trump Administration:

Nunberg: “They Know Something on Him”

Donald Trump’s former advisor Sam Nunberg, defying a subpoena to testify before a grand jury in the Russia investigation, says Trump is an “idiot” who caused the inquiry — and is covering up his knowledge of Trump-Russia links.

Nunberg carried out a blitz of television interviews on Monday, hoping to take the offensive against Special Counsel Robert Mueller. He dared Mueller to arrest him, saying he did not want to spend “80 hours” going through subpoenaed e-mails with Donald Trump and his high-level staff: “Screw that. Why do I have to go? Why? For what?”

His stance appeared to be motivated from concern for another Trump advisor, Roger Stone, who is also under scrutiny in the investigation.

[Late Monday, Nunberg appeared to step back, saying he will cooperate with Mueller’s team.]

Nunberg, who worked for Trump from 2014 but was dismissed twice because of differences among Trump’s advisors, initially dismissed the notion of Russian collusion with the Trump campaign: “Vladimir Putin is too smart to collude with Donald Trump. Donald Trump couldn’t keep his mouth shut if Putin colluded with him.”

But Nunberg then implicated Trump through a series of claims, saying, “Donald Trump caused this because he’s an idiot,” including Trump’s statement — undercutting the official line — that he fired FBI Director James Comey because of the Russia investigation and Trump’s bragging about Comey’s dismissal to Russian Foreign Minister Sergey Lavrov and Russian Ambassador Sergey Kislyak in a White House meeting.

He asserted, “Mueller has enough on Trump, they don’t need me….They know something on him….Perhaps I’m wrong, but he did something.”

Then he specifically claimed that Trump knew in advance of the June 2016 meeting between his inner circle — Donald Trump Jr., Trump’s son-in-law Jared Kushner, and campaign manager Paul Manafort — and three Kremlin-linked envoys.

Nunberg said of the discussion in Trump Tower — set up by Donald Trump Jr. through associates of Russian-Azerbaijani billionaire Aras Agalarov, with whom Donald Trump Sr. was purusing a series of business projects — “He talked about it a week before and I don’t know why he did this.”

He backed up the claim with the assertion that Mueller’s team is investigating the partnership between Trump and Agalarov to host the Miss Universe pageant in Moscow in 2013:

A 2016 dossier, compiled by former British intelligence officer Christopher Steele, highlighted the event and included claims that Trump was compromised because he was under surveillance when he had sex with women in a Moscow hotel. Nunberg said Trump’s long-time aide Keith Schiller told him that Trump declined an offer from Aras Agalarov’s son, pop singer Emin, to send women to the hotel room: “Trump didn’t want it. He doesn’t do that. He’s too smart for that.”

Nunberg also said that former Trump foreign policy advisor Carter Page, under scrutiny since 2013 of being a possible Russian agent, is probably guilty: “I believe Carter Page was colluding with the Russians. I think that Carter Page is a weird dude I don’t think he should have been involved in that campaign.”

As we’ve said many times before, there was no collusion with the Trump campaign. Anything further on what his actions are — he hasn’t worked at the White House, so I certainly can’t speak to him or the lack of knowledge that he clearly has.

The Wide Scope of Mueller’s Inquiry

Beyond the drama of Nunberg’s on-air display, the former advisor confirmed the scope and seriousness of Mueller’s inquiry.

Axios had reported — before Nunberg’s TV appearances but apparently in a leak from him — that Mueller has also requested all material related to Donald Trump; Page; Trump’s lawyer Michael Cohen; and Schiller.