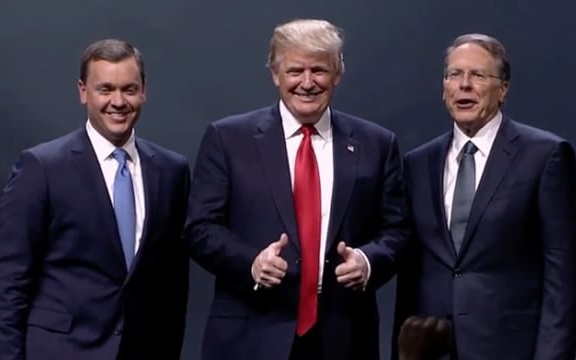 Signs of fifth Trump change of position in nine days

Developments on Day 406 of the Trump Administration:

A day after Donald Trump surprised legislators by indicating he might accept some moves towards gun control, he appears to change course — the fifth time in nine days — after a meeting with National Rifle Association officials.

On Wednesday, Trump suddenly embraced measures such as raising the age limit on gun purchases from 18 to 21, putting in an effective system of background checks, and not linking data collection to a measure allowing the carrying of concealed weapons across state lines. Democrats were pleased if cautious, Republicans unsettled.

I had a great meeting tonight with @realDonaldTrump & @VP. We all want safe schools, mental health reform and to keep guns away from dangerous people. POTUS & VPOTUS support the Second Amendment, support strong due process and don’t want gun control. #NRA #MAGA

While Trump offered no details, he was effusive in response:

Good (Great) meeting in the Oval Office tonight with the NRA!

Press Secretary Sarah Huckabee Sanders refused to give any information about the previously unannounced meeting.

Advocates of gun control saw justification for their scepticism about Trump’s apparent embrace of measures on Wednesday. Matt Bennett of the Third Way think tank wrote, “Unsurprising, but no less revolting.”

After the mass killing of 17 students and staff at a Florida high school — and an impassioned, articulate campaign by survivors — on February 14, Trump was silent about guns for six days. Since then, he has:

*Proposed a ban on bump stocks, which convert semi-automatic to automatic weapons, and called for background checks, reversing his Administration’s rollback of Obama-era efforts

*Proposed the raising of the age limit for gun purchases from 18 to 21, retreated from the idea after a meeting with NRA executives, then proposed it again

*Proposed taking guns from those with mental conditions by setting aside due process, such as a court appearance

But, in a sign that nothing will be done soon in Washington, Senate Majority Leader Mitch McConnell said he had no intention of bringing a measure to the floor next week. Senator John Cornyn of Texas, the second-ranking Republican, drew a line on Wednesday’s White House meeting by describing it as a “brainstorming session” that will not dictate policy.

Risking a trade confrontation with other countries, including American allies, Donald Trump imposes a 25% tariff on steel and 10% on aluminum.

Our Steel and Aluminum industries (and many others) have been decimated by decades of unfair trade and bad policy with countries from around the world. We must not let our country, companies and workers be taken advantage of any longer. We want free, fair and SMART TRADE!

Trump’s resort to a little-used national security provision of US trade law is likely to bring legal challenges by China, the European Union, and Brazil at the World Trade Organization.

Canada said the measure was “absolutely unacceptable” and vowed to respond. Jean-Claude Juncker, president of the European Commission, called the tariffs “a blatant intervention to protect U.S. domestic industry”: “We will not sit idly while our industry is hit with unfair measures that put thousands of European jobs at risk.”

US business leaders were also far from receptive. “It’s pretty much our worst fears,” said Rufus Yerxa, president of the National Foreign Trade Council. “This is a pretty clear indication that the Trump administration cares more about the old economy than it does the new economy.”

The Dow Jones average fell 586 points, a loss of more than 2%, in early-afternoon trading before closing with a 420-point drop. Asian markets opened more than 2% lower on Friday morning.

Some Democrats welcomed the tariff but some Repubicans, including conservative leaders, expressed opposition.

Trump announced the tariffs as a top Chinese economic official is in Washington for talks to avert a trade conflict. aimed at forestalling a possible trade war. Liu He, one of Chinese President Xi Jinping’s closest aides, was scheduled to meet with senior administration officials.

Wei Jianguo, a former Chinese Vice Commerce Minister, said the tariffs are are against WTO rules: “China does not want to see a trade war with the United States. But if Trump insists, China is not afraid of it.”

UPDATE: Donald Trump began Friday with the assurance that “trade wars are good and easy to win”:

When a country (USA) is losing many billions of dollars on trade with virtually every country it does business with, trade wars are good, and easy to win. Example, when we are down $100 billion with a certain country and they get cute, don’t trade anymore-we win big. It’s easy!

Apollo has large investments in firms such as EP Energy and Northwoods Energy who will benefit from the relaxation of regulations of pipelines.

But last June, the Trump Administration delayed implementation for a year of new assessment, inspection, and repair requirements for existing and future gas transmission pipelines.

Just after the 2017 inauguration, the Trump Administration withheld the implementation of a similar safety monitoring rule for hazardous liquid pipelines that had been in the works for six years. In December, the Department of the Interior delayed the implementation of a 2016 rule that implements new natural gas transportation and production safety requirements until 2019.

After the Harris-Kushner meetings, Donald Trump also pulled back from closing a tax loophole used by Apollo.

Jared Kushner received a $184 million loan from Apollo Global Management after meeting with its founder Joshua Harris in the White House. Trump then backed down from his campaign pledge to close a major tax loophole exploited by private equity managers like Joshua Harris. pic.twitter.com/WNEnDC5Nzd

Treasury Secretary Steven Mnuchin has asked the University of California, Los Angeles not to post a video of a public appearance at which he was challenged by students, including a sixth-grader who went through a list of Trump Administration actions and their effects and asked, “How can you live with this?”

A UCLA spokeswoman said Monday a video would be posted this week, but pokeswoman Peggy McInerny wrote in an email on Tuesday that Mnuchin “has retracted his permission for the Burkle Center to post its video and podcast of yesterday’s event on its website, so we are unable to share either recording with you”.

Marketplace, the host of the event, later posted an edited audio version.

The question from the sixth grader, with Mnuchin scrambling for a response:

A person who was at the event has sent me a clip. Here's some of the video Mnuchin doesn't want the public to see: pic.twitter.com/RpYZP6Zn7m