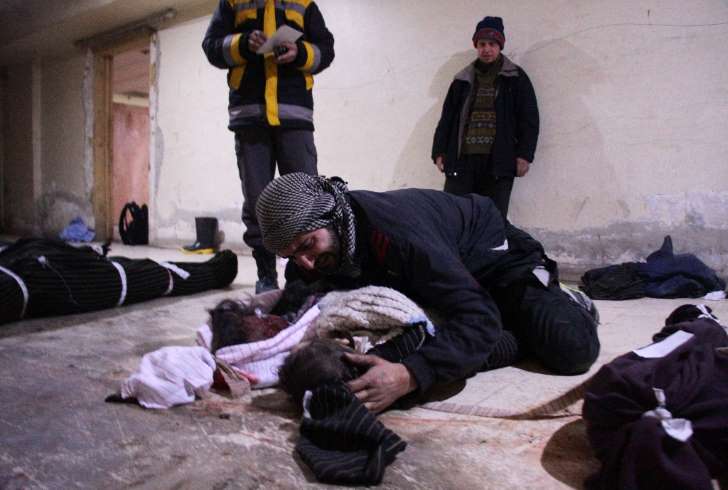 “International intervention is a long shot, but for those trapped in East Ghouta, it is almost all that is left.

Written in partnership with the Birmingham Brief of the University of Birmingham:

Another bloody chapter in Syria’s seven-year conflict is being written. With bombs, missiles, and shells, pro-Assad forces are carrying out mass killings of civilians in East Ghouta, near the Syrian capital Damascus, amid a tightening five-year siege in which scores of people have died from lack of food or medical treatment in recent months.

In the following weeks, thousands more people are likely to be killed or wounded as the forces of the Assad regime and its allies try to overrun the territory, with more than 350,000 residents facing — in the words of the UN — “catastrophe”.

What is East Ghouta?

East Ghouta is a sizable region of towns and farmland east and northeast of Damascus. It was one of the first areas to join the peaceful uprising against the Assad regime, which began in March 2011. Since 2012, the area has been controlled by the opposition and by armed factions (“rebels”) that were formed as the regime’s military tried to regain the territory. 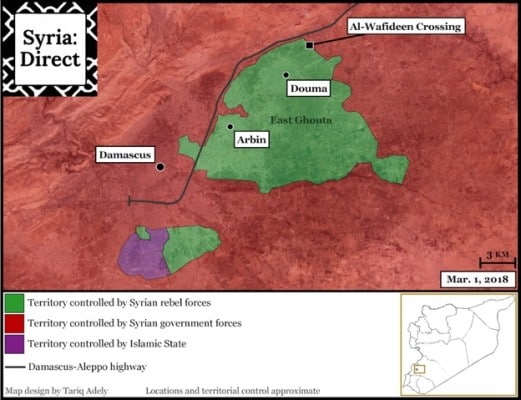 The Assad regime soon imposed its siege. In August 2013, it carried out sarin attacks on six sites in East Ghouta (and one in West Ghouta, southwest of the capital), killing more than 1,400 people.

Rebels repelled subsequent attacks, but bombardment and siege eroded the civil society groups who had developed an alternative to the Assad regime. Activists were killed or abducted by gunmen, and tensions rose over rising prices for food and basic supplies.

In spring 2017, aided by rebel in-fighting, pro-Assad forces took the southern part of East Ghouta. However, the remaining section held out, including towns such as Erbin and Harasta and the centre of the territory, Douma.

This month, the Assad regime and its allies such as Iran have been preparing for an invasion to retake that section. In preparation for the ground assault, airstrikes and shelling have killed almost 900 people and wounded more than 4,000. Since February 18, the toll has been more than 630 slain and more than 3,300 injured.

On February 27, Russia declared a “humanitarian pause” from 9 am to 2 pm each day, but the PR tactic is not to halt the fighting or permit aid into East Ghouta. Instead, pro-Assad attacks are continuing with Moscow putting out the pretext that rebels are preventing civilians from leaving the area.

White Helmets volunteers rescue a baby girl from under rubble:

The @SyriaCivilDefe teams rescued a baby girl alive today, from under the rubble after renewed aerial and artillery bombardment of the civilian neighborhoods in #Douma city in besieged #EasternGhouta. #Syria 25 Feb #SaveGhouta @SCDrifdimashq pic.twitter.com/YEDsU42Pko

Why Is The Assad Regime Invading?

Backed by Russia, Iran, and Hezbollah, the Assad regime has been trying to eliminate opposition areas and the rebel presence near Damascus. In the past 18 months, “surrender or starve” tactics have forced the capitulation of most opposition-held suburbs, including all to the northwest, west, and southwest of the capital. East Ghouta is the holdout, because of the diversity of the territory and the strength of the rebel factions, despite the protracted siege and bombardment.

The Assad regime and Russia justify the assault by saying rebels have killed scores of people and injured hundreds in Damascus with rocket and mortar fire. Pro-opposition activists and the White Helmets civil defense say at least some of the attacks in the capital are actually by regime forces. 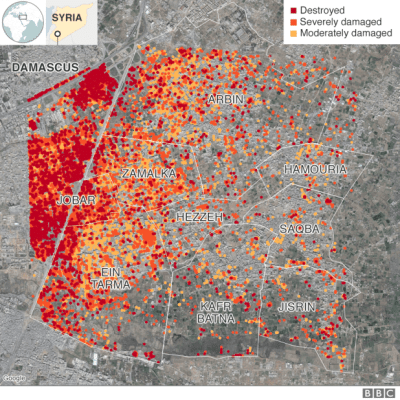 As deadly and barbaric as the assault on East Ghouta is, it is only part of the conflict in a fragmented Syria, which has little hope in the medium-term of reunion as a single country.

Turkey, aided by Syrian rebels, is attacking the Kurdish canton of Afrin in the northwest — Ankara says the operation is needed to eliminate the Syrian Kurdish militia YPG, which it says is part of the Turkish Kurdish insurgency PKK.

The Assad regime had hoped to overrun the largest opposition area, Idlib Province and western Aleppo Province in northwest Syria. However, it was checked by rebel resistance, Turkish intervention, and Russian caution, leading to a diversion of forces to the East Ghouta front.

Pro-Assad forces are on a tense frontline with the US-backed, Kurdish-led Syrian Democratic Forces in northeast Syria. On February 8, hundreds of pro-Assad troops — reportedly including many Russian fighters — were slain by US airstrikes during a failed attack on the SDF near gas fields.

Is There Any Hope?

Russia has blocked attempts so far to halt attacks and bring aid into East Ghouta. Moscow acceded to a UN Security Council resolution on February 24 calling for a 30-day ceasefire, but only after the removal of a 72-hour timetable for implementation.

The international community, after years of ineffective response to pro-Assad assaults, is unlikely to make a difference this time. The pattern is likely to be the same as the five-month Assad-Iranian-Russian assault on eastern Aleppo city that forced capitulation in December 2016: a tight siege, daily airstrikes and shelling with thousands of casualties, and token declarations of “humanitarian corridors” to fend off any pressure to halt the offensive.

This could be averted with a multilateral effort, inside and outside the UN, for Russia to change its position and also for Turkey to cease fire in northwest Syria. If a line was finally drawn, it would rebalance the political situation for a negotiated resolution, given that the UN’s “Geneva process” has been stymied by Assad regime resistance and Russia’s “Astana process” is no more than cover for the pro-Assad military operations and sieges.

That is a long shot, but for those trapped in East Ghouta, it is almost all that is left.