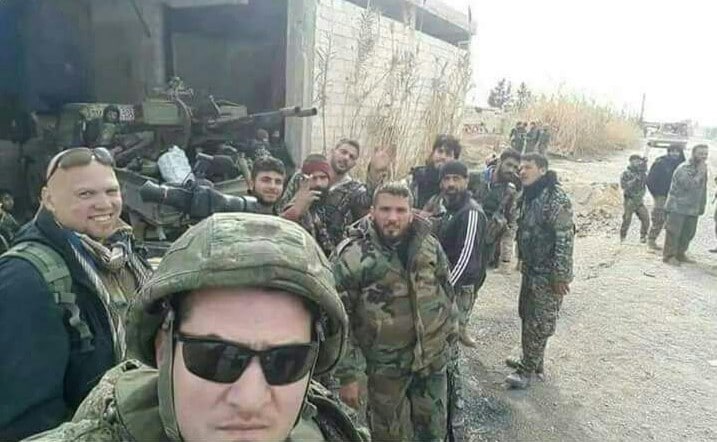 The site said the Assad regime prevented Red Crescent buses from entering the opposition enclave, instead insisting that patients and their families make their way towards the regime checkpoint at the al-Wafideen crossing so regime TV could film their departure.

The medical system in East Ghouta is near collapse after pro-Assad airstrikes have struck 22 medical facilities since early February. 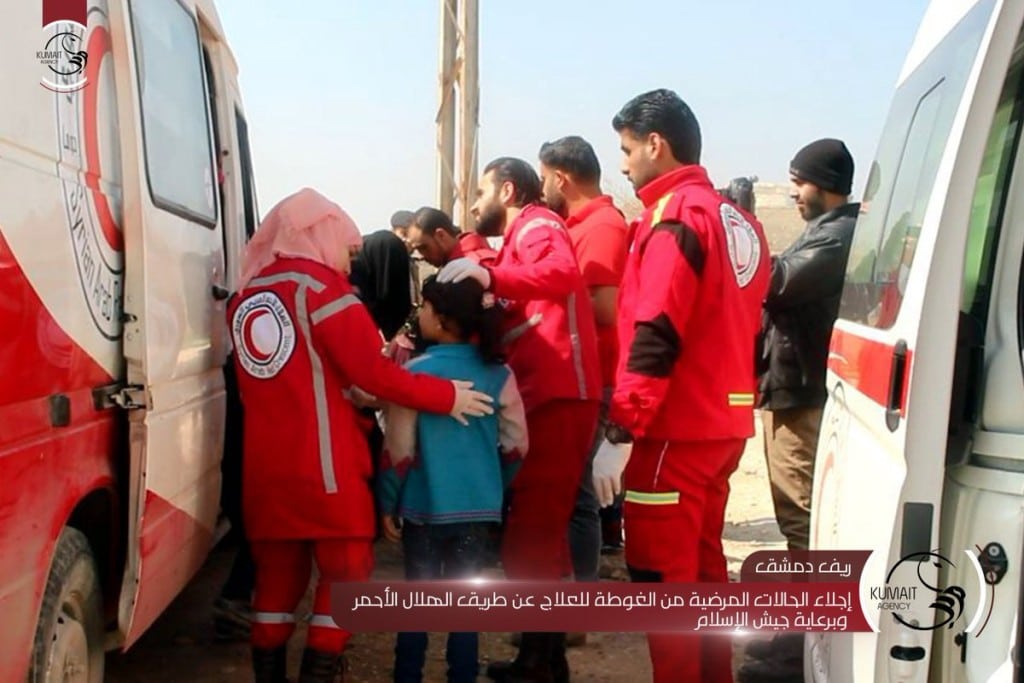 During the five-year siege of the area, the Assad regime has refused evacuation of seriously ill civilians except for 27 who were allowed out in the autumn in a swap for people held by the Islamic bloc Hay’at Tahrir al-Sham.

Hoping to force a surrender, Russian officials are in talks with rebels in the bombarded and besieged East Ghouta area near Syria’s capital Damascus, according to UN Secretary-General Antonio Guterres.

[Local sources in the rebel factions Jaish al-Islam and Faylaq al-Rahman later told EA that they are not in direct talks with Russian representatives, and are working with UN personnel.]

After a five-week assault that has killed about 1,400 people and injured thousands, the Assad regime’s forces — working with foreign allies and enabled by intense Russian airstrikes — have taken more than half of the remaining opposition area in East Ghouta, cutting the enclave and closing on its center, the town of Douma.

Guterres revealed the talks in an address to the Security Council on Monday. He said the regime and Jaish al-Islam, the key rebel faction in Douma, had discussions on Sunday after UN intervention:

I was informed as I was entering this room, from our people in Damascus, that there has been progress in relation to civilian evacuations and humanitarian aid.

Guterres noted a statement by Jaish al-Islam, “An agreement was reached with the Russian side through the United Nations for a humanitarian medical evacuation of the wounded for treatment outside of eastern Ghouta.”

Surrender talks are also underway in other towns, even as pro-Assad forces continued attacks outside Douma. In the town of Kafr Batna, one civilian was reportedly killed and others wounded, apparently by rebel gunfire, amid demands for surrender.

Guterres noted that the surrender discussions were begun after “the Syrian government and its allies intensified airstrikes and launched a ground offensive…steadily moving to urban centres and forcing large-scale displacement”.

Ne noted that, despite the surrender talks, “No sieges have been lifted….To our knowledge, not one critically sick or wounded person has yet been evacuated.”

This is what has happened in Eastern Ghouta since Feb. 18, according to the UN’s @OCHA_Syria. pic.twitter.com/y9D8JkU3ux

US Says It Will Act, But No Indication of Movement

US Ambassador Nikki Haley repeated the Trump Administration’s line that Washington “remains prepared to act if we must”, if the Security Council does not halt the pro-Assad attacks: “When the international community consistently fails to act, there are times when states are compelled to take their own action.”

However, Haley gave no indication of specific action that would bring US intervention or what form it would take.

Administration officials, notably Defense Secretary Jim Mattis, have distinguished between another sarin attack by the Assad regime, which would bring a US response, and conventional and chlorine assaults which would not cross the line.

Last week the White House held a meeting on the East Ghouta situation in which National Security Advisor H.R. McMaster favored US steps to halt the pro-Assad offensive but Mattis was “adamantly” opposed, according to officials.

After the Assad regime’s sarin attack on Khan Sheikhoun in northwest Syria in April 2017, the US — in its first deliberate strikes on regime forces in the 7-year conflict, fired 56 missiles on the airbase from where the attack was launched.

Since then, the regime has not used sarin. However, it continues to deploy chlorine, including on at least seven occasions since January 13.

In the Security Council, Russian Ambassador Vassily Nebenzia tried to cover for the chlorine assaults while staving off any intervention to halt the pro-Assad offensive. He said the regime was being accused of chemical attacks in a bid to“prepare the ground for the unilateral use of force against sovereign Syria: “Basically steps are being weighed which could hit regional stability very, very hard.”

Removal of 1,000 People South of Damascus

Pro-opposition sites report the removal of a “first batch” of 1,000 people from al-Qadam, south of Damascus, to Hama Province in northwest Syria.

Al-Qadam agreed a truce in 2014 and signed a capitulation agreement in September 2017. An opposition official said implementation provides for those who wish to leave to go either to Idlib Province or northern Hama Province.

The source said the Assad regime issued a 48-hour ultimatum on Saturday for rebels and their familities to leave or face an offensive similar to the attacks on East Ghouta.

In a sign of its possible next target, regime warplanes struck Dara’a Province in southern Syria on Monday, their first attacks since last summer.

The attacks broke a “de-escalation” agreement, reached between Russia and the US, covering southern Syria from the border with the Israeli-occupied Golan Heights across to Dara’a city, where the Syrian uprising began in March 2011.

A US State Department official said:

If [reports are] true, this would be a clear violation of the (southwest) ceasefire by the Syrian regime that broadens the conflict.

We urge all parties in the southwest de-escalation zone not to take actions that would jeopardize the ceasefire and make future cooperation more difficult.

Russia and the regime also resumed airstrikes on Idlib Province in northwest Syria yesterday, hoping to draw a line against a Turkish-rebel advance on two regime enclaves, al-Fu’a and Kafraya, north of Idlib city.

At least one civilian was killed and scores wounded in towns across the province. Markets and a hospital were hit, and 20 children were reportedly wounded in an attack on a kindergarten.