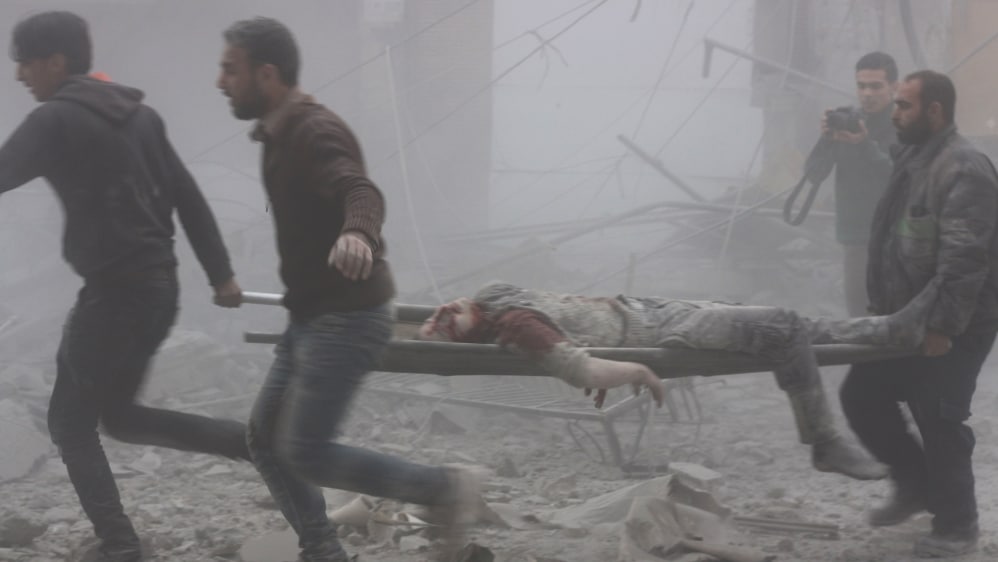 No let-up in regime-Russian bombings as aid convoy shelled

UPDATE 1730 GMT: Residents of Hamouriya have reportedly signed a surrender agreement, following Monday’s bombardment in which at least 23 people were killed amid a claimed chlorine attack.

Negotiations are ongoing in two other towns, including Misraba.

The Assad regime and foreign allies, including Russia, killed at least 85 people on Monday in their assault on more than 350,000 residents of East Ghouta near Syria’s capital Damascus.

Meanwhile, the show of an aid convoy to the besieged territory collapsed, first, as regime forces stripped medical supplies from the trucks and then as the convoy was shelled while in Douma, the center of the enclave.

During the day, 46 trucks finally entered East Ghouta, but an aid source said 10 left Douma “fully sealed” and four were partially unloaded after a nine-hour stay.

“The team is safe, but given the security situation a decision was taken to go back for now. They off-loaded as much as possible given the current situation on the ground,” Red Cross spokeswoman Iolanda Jaquemet said.

HAPPENING NOW @UN @ICRC_sy @SYRedCrescent aid convoy to #EasternGhouta exiting #Duma after nearly 9 hours. We delivered as much as we could amidst shelling. Civilians are caught in a tragic situation. pic.twitter.com/P4Djg75XRX

A World Health Organization official said the regime ordered the removal of 70% of medical supplies, including trauma kits, surgical kits, insulin, and other material.

More than 85 people killed today due to airstrikes & shelling in #EastGhouta, highest daily toll since the #UN resolution. The aid convoy entered after being stripped of medical supplies, delivered aid amidst shelling, but was forced to leave early w/out offloading all aid. pic.twitter.com/vMPiHJxomT

At least 23 people died in Hamouriya amid shelling and reports of a “gas attack”. In Kafr Batna, 17 people were slain by missiles fired from Russian and regime warplanes while at least six were killed in Douma. Six perished in Jisreen and three in Saqba.

A witness in Hamouriya said, “We were sleeping in the basement and were woken up by our neighbours and relatives who told us that there has been a chlorine attack. We went outside and saw the container releasing the horrible smell.”

In the past month, more than 1,100 people have been slain by the regime-Russian attacks.

White Helmets rescuers on the move after a strike on Jisreen:

Again, direct hit on the civilians and @SyriaCivilDefe volunteers while they were working to rescue the injured people. Panic in the childrens after brutal air raids on residential neighbourhoods in #Jisreen city in #EastrGouta. #SaveGhouta #Syria 5 Mar pic.twitter.com/DOv5bfu58Q

Following a Regime #chlorine gas attack in #Hamorieh city, more than 30 suffocation cases including women, children, #CivilDefense volunteers, only hours after the Aid convoy arrived and left #EasternGhouta . This is attack number 8 in 2018 pic.twitter.com/IlbByRMP2d

Pro-Assad forces continued their advance from the southeast of East Ghouta, claiming the village of al-Mohammadiyeh on Monday.

After intensive bombing led by Russian warplanes, rebels have withdrawn from the less-populated farmland, villages, and towns in the past week. The regime now says it holds 40% of the opposition area.

US Discusses Assad’s Chlorine Attacks, But Will Not Act

Responding to the latest chemical attacks by the Assad regime, The Trump Administration has discussed military action, officials said.

However, no options are being pursued at this time.

One official said that no military action was endorsed and the Administration decided to continue monitoring the situation.

A “senior administration official” said that Mattis was “adamantly” against any response, although McMaster “was for it.”

Pentagon spokesperson Dana White denied that Mattis took part in any discussions: “[The] conversation did not happen.”

Last month Mattis appeared to distinguish between another sarin attack by the Assad regime — which might bring a US strike, as with the April 2017 response to the regime’s use of the nerve agent in northwest Syria — and chlorine attacks, which would not be challenged.

The Russian Defense Ministry says 33 passengers and 6 crew have been killed in the crash of a transport plane near the Hmeimim airbase in western Syria.

The passengers are all reportedly Russian troops.