Iran Daily: Rouhani Presses for Europe’s Separation from US on Nuclear Deal 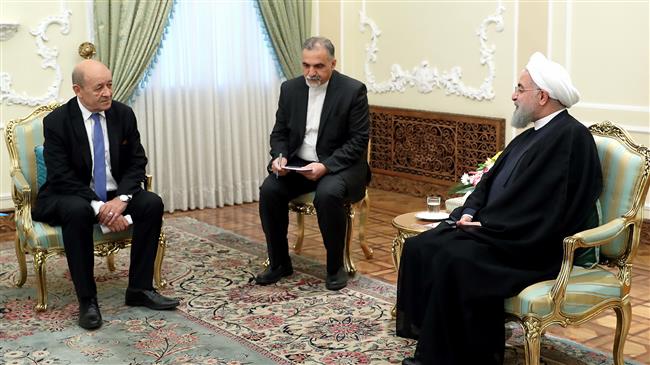 Iran’s President Hassan Rouhani has used a meeting with the French Foreign Minister to press for Europe’s separation from the US over the July 2015 nuclear deal.

Hosting Jean-Yves Le Drian on Monday, Rouhani said all concerned will regret the collapse of the accord if the the US maintains and expands its sanctions: “The survival of the JCPOA [Joint Comprehensive Plan of Action] will prove to the world that negotiations and diplomacy are the best options to solve problems.”

At the same time, he said Tehran can counter the American restrictions: “Of course, We will be ready for any conditions, which would not be favorable to us.”

The Trump Administration has not withdrawn from the JCPOA, despite Donald Trump’s repeated declarations of the “worst deal” ever for the US. But Washington is continuing to press Iran through the economic and financial sanctions, which have deterred European firms from completing trade and investment deals essential to the Islamic Republic’s recovery.

The European Union and the three European signatories of the deal — France, the UK, and Germany — have continued their support of the accord. However, they have pushed Iran to negotiate a separate deal over Tehran’s ballistic missile development, a call rejected by the Islamic Repbublic so far. French President Emmanuel Macron has also led statements of concern that Iran may be supplying missiles used by Yemen’s Houthi insurgency in attacks on Saudi Arabia.

Iranian State media avoided any mention of the ballistic missile issue, instead featuring the comment of Iranian Foreign Minister Mohammad Javad Zarif, “Europe must put the US under pressure to implement its commitments and not allow the US to make illogical and unlawful demands despite its lack of commitment and violations [of its commitments].”

Press TV limited its summary of Le Drian’s remarks to “Paris [is] keen to save and implement the nuclear deal….France would make its utmost efforts to save the accord.”