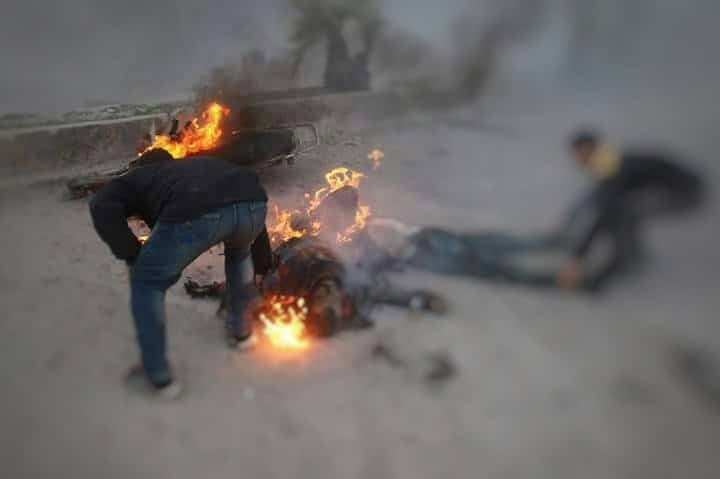 The Foreign Minister did not specify the nature of the intervention.

The Assad regime has used chlorine at least seven times since January 13 as it tries to overrun East Ghouta, the area with more than 350,000 people near Damascus. Scores of people have been tried for breathing difficulties, and two infants were killed in the latest attack.

An eighth “gas attack” was initially claimed in Hamouriya on Monday, but medical staff later staff that victims were suffering from fumes from conventional bombing.

However, on Wednesday activists claimed another attack on Hamouriya, after a surrender agreement collapsed. Munitions include incendiary weapons, cluster bombs, and “gas”, according to the reports. Video showed victims struggling to breathe.

Yesterday [Wednesday] night was the darkest and most horrific night ever. They used phosphorus, napalm, cluster bombs, and chlorine gas.

Our teams were panicking because it was like 2013, when al-Assad’s regime used chemical weapons on Ghouta [sarin attacks that killed more than 1,400 people].

At least 13 more people were killing shelling on Thursday, according to activists.

Bouthaina Shaaban, a senior advisor to Bashar al-Assad, said that the reports of mass killing, chlorine attacks, and humanitarian crisis were because of a “state of confusion” over gains by pro-Assad forces.

At least 1,300 people are estimated to have been killed since February 1 by the assault by the Assad regime and its allies, including Russian airstrikes.

The international medical organization Médecins Sans Frontières said that, based on reports from 18 medical facilities it supports, 1,005 people had been killed and 4,829 wounded between February 18 and March 3. It added that the total was an underestimate, as other facilities had not yet reported.

Over the winter French officials, including President Emmanuel Macron, have been speaking of a firmer line against the Assad regime’s use of chemical weapons. However, Paris has been vague about the exact circumstances which would bring a response.

US counterparts, such as Defense Secretary Jim Mattis, have indicated that the US would again strike — as it did for the first time in April 2017, after an attack in northwest Syria — if the Assad regime used sarin. However, Mattis appeared to say that chlorine assaults would not bring American intervention.

A White House meeting was convened earlier this week to discuss the East Ghouta situation. However, while National Security Advisor H.R. McMaster strongly supported a line against the use of chlorine, Mattis was “adamantly” opposed, according to US officials.

The discussion did not authorize any measures.