Trump Puts Defense Before Diplomacy, as He Demands His Military Parade 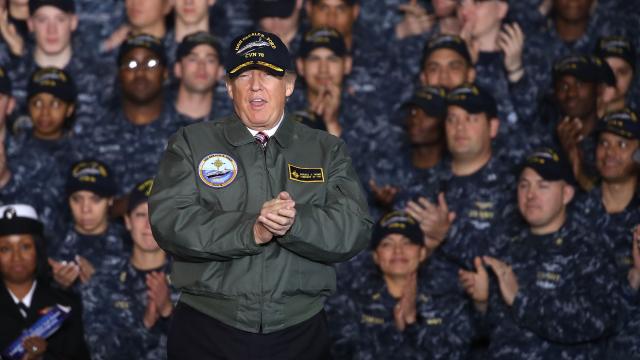 “The aggressive military posturing is not just the result of Trump’s own ‘fire and fury’ and love of militaristic swagger; it has the support of those around him”

Maria Ryan of the University of Nottingham and The Trump Project writes for The Conversation:

It seems Donald Trump’s visit to France last summer made a big impression on him. Having seen the full pomp of a French military display on Bastille Day, he has reportedly ordered his military to top it with a rare parade of American forces through the streets of Washington DC. With North Korea back in the habit of parading its own massive forces through Pyongyang, Trump is keen to make it clear who’s still the biggest military power on Earth.

But this isn’t just another chance for Trump to show off; it actually matches the explicitly military-first foreign policy his administration has been drawing up.

The Trump administration’s National Defense Strategy, released in late January, provides the most comprehensive insight yet into the US’s recalibrated global outlook. The strategy is staunchly global in scope and militaristic in tone: under Donald Trump, the US will seek to aggressively project power into every region of the world, promoting US leadership in the face of hostile rivals.

Produced every four years by the Department of Defense, the NDS is a means to operationalise the more general National Security Strategy released by the White House. This latest one paints a stark picture of a hostile world, one in which “inter-state strategic competition, not terrorism, is now the primary concern in US national security”. The resurgence of “long-term strategic competition” by “revisionist powers” – namely China and Russia – has created “global disorder” and “a security environment more complex and volatile than any we have experienced in recent memory”.

This is a serious change. At the end of the Cold War, it seemed to some as though great power competition had come to an end: the world became “unipolar”, with the US as its sole superpower. Its military and economic power seemed unmatchable, and there was no serious competitor for the foreseeable future. But the NDS makes clear that the Pentagon now recognises that the US is in relative decline.

The post-World War II global order shaped by American power, is, it says, “weakening”. “China and Russia want to shape a world consistent with their authoritarian model”, while “rogue regimes” like Iran and North Korea threaten US dominance in their respective regions. In this new era of inter-state competition, “America’s military has no preordained right to victory” – but failure would “result in decreasing US global influence … and reduced access to markets”.

In this environment, the US will seek to “remain the preeminent military power in the world, ensure the balances of power remain in our favour, and advance an international order that is most conducive to our security and prosperity”.

On the face of it, none of this is drastically different from the existing norms that govern the way US foreign policy is made. But looked at in context, it’s a decidedly hawkish turn. It also means the Trump administration has set out its stall as an internationalist power, not an isolationist one.

But in international relations parlance, this isn’t liberal internationalism, meaning the pursuit of steadily improved relations among states; it’s offensive realism, a view of the world in which hostile states compete for influence, leadership and dominance. So if this is how the Trump administration sees the world, what are the implications?

This strategy probably means yet another significant increase in defence spending, despite the US’s very great superiority over its closest military rivals. The Trump administration has already requested an additional US$52 billion, to which Congress added an another US$37 billion.

What’s more worrying is that this strategy of global militarism coincides with the dramatic erosion of the State Department. Thanks to a hiring freeze, the shuttering of various departments, and a crashing decline in morale, America’s diplomatic corps is hemorrhaging its most senior and experienced diplomats, and they’re not being replaced.

And to make matters worse, the most critical policymakers in the State Department, the assistant secretaries, are largely missing: only six of these important roles have been filled, while Trump has failed to even make nominations for 11 of them. That means the department is literally unable to make new policy in these areas.

Combined with the Pentagon’s aggressive new military strategy, this means the US’s whole global engagement strategy is increasingly defined by military power. This puts the US’s allies in a tight spot, and particularly those in Europe.

The NDS envisages the US working with “a robust constellation of allies and partners” – again, an internationalist position. But European leaders may well face public pressure not to align as closely as usual with the US because of Trump’s exceptionally low international approval ratings. Some European leaders have occasionally beenopenly critical of Trump.

But the most worrying aspect of the new report is its tone. Aggressively labelling other countries as adversaries almost always turns them into adversaries or consolidates their position as enemies. Belligerent rhetoric tends to preclude a search for common ground and empowers hawks on all sides.

The NDS is signed by the secretary of defence, General James “Mad Dog” Mattis – a hawk who spent 44 years in the Marine Corps, and who is considered one of the “responsible adults” around an impetuous, thin-skinned president. In other words, the aggressive military posturing is not just the result of Trump’s own “fire and fury” and love of militaristic swagger; it has the support of those around him, and may well outlast Trump himself.