Syria Daily: US Warning Over Assad’s Chemical Attacks — But Will Anything Be Done? 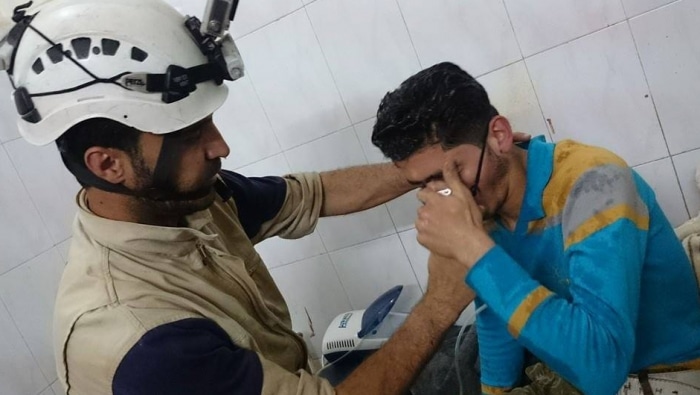 US: “We reserve the right to use military force” if attacks continue

UPDATE 1400 GMT: At least 7 civilians have been killed and “many injured” after pro-Assad airstrikes on a caravan of displaced families in the village of Tel Ahdiya in Aleppo Province.

Watch how Assad's forces targeted civilians who were trying to escape from bombing on south countryside. pic.twitter.com/ALuwB1x8JR

2 civilians were killed, many injured "including children" after 2 cluster bombs targeted #Hamouriyah town in #EasternGhouta. pic.twitter.com/0LWQe8v3z7

“Senior US officials” have said that Syria’s Assad regime is developing new types of chemical weapons, and that Washington will consider military action to deter future attacks.

“We reserve the right to use military force to prevent or deter the use of chemical weapons,” one official said. He declined to say the line at which the US would respond.

A second official said the Trump Administration hopes international sanctions and diplomatic pressure will curb the regime’s program. He said that if therew as no action, the regime’s weapons could spread beyond Syria and possibly even “to U.S. shores”.

“They think they can get away with it if they keep it under a certain level,” an official said.

The warning comes as the regime continues chlorine attacks on the East Ghouta area near Damascus, with three reported by medics, activists, and residentes since January 13.

The regime carried out a sarin assault on the town of Khan Sheikhoun in Idlib Province in northwest Syria in April 2017, killing about 92 people, according to activists, rescuers, and medics. An investigation by the Organization for the Prohibition of Chemical Weapons formally found the Assad regime responsible. Russia blocked any further action by vetoing the extension of the mandate for the OPCW inspectors.

Days after the attack, US missiles struck the Shayrat airbase, from where the attack was launched. However, the Americans did not respond to the subsequent chlorine operations, both in northwest Syria and near Damascus.

Last week, after French officials raised the issue, US Secretary of State Rex Tillerson publicly criticized the Assad regime’s holding of chemical stocks and ongoing attacks. He said Russia bears responsibility as well, for not curbing the regime.

After the Assad regime killed more than 1,400 people near Damascus in August 2013 with sarin attacks, Russia was able to deflect the US response into an effort for the handover of the regime’s chemical stocks and destruction of facilities.

While a large part of the stocks were passed to the international community for destruction, the Assad regime turned to attacks with chlorine, which is not banned under international conventions. They also retained some stocks of nerve agents such as sarin and other chemicals, according to officials from the UN and Western countries.
Meanwhile, regime forces continue violating the ceasefire agreement that was reached few days ago to cease all hostilities in eastern Ghouta.

The latest pro-Assad bombing and shelling in northwest Syria and on East Ghouta has damaged another hospital, this one built under 20 meters of rock:

The Al Maghara cave hospital was considered the most secure in Syria. It was hit by five missiles according to the Union of Medical Care and Relief Organizations.

UOSSM spokesman Avi D’Souza said there were no deaths as staff and patients moved to a safe room when they heard incoming jets.

However, the facility, which serves a population of 50,000 and performs about 150 major surgery procedures a month, suffered extensive damage. D’Souza said the destruction was consistent with that caused by a “bunker-buster” bomb.

In Idlib Province, a missile hit the local council building in the town of Saraqeb, rendering it unusable.

About 45 civilians have been killed and 120 wounded in Saraqeb in the last month. The town has been hit by scores of airstrikes since Sunday. Pro-Assad forces, advancing in southeast Idlib Province, are about 15 km (9 miles) away.

A pro-opposition site says five civilians, including a mother and child, were slain in Saraqeb on Thursday. It said another 15 people, including seven members of a single family, were killed in Jazraya in southern Aleppo Province.

13 civilians, mostly women and children, were killed in the intensified Russian airstrikes on Talafeh village and Jazraya town in southern rural Aleppo.

A Mother and her daughter burnt alive and many others injured after #Russian warplane airstrikes dropped 'Napalm' rockets on the residential areas of #Sarqib city, #CivilDefense teams rushed to help the wounded, extinguish the fire and continue the rescue operation pic.twitter.com/JHPRbUzpL2

Turkish authorities say two civilians have been killed and 19 injured in the latest cross-border rocket attacks by the Syrian Kurdish militia YPG.

The YPG has been responding to a Turkish-rebel offensive, launched two weeks ago, after the Kurdish canton of Afrin in northwest Syria.

Turkish officials said nine rockets from Afrin struck Reyhanlı and Kilis in southern Turkey on Friday. Two people were killed and 16 injured in Reyhanlı and three injured in Kilis.

At least five people were wounded by rocketing of Kilis on Thursday.

Health officials in Afrin say 104 civilians have been killed by Turkish attacks.

The UN’s head of humanitarian operations for Syria, Jan Egeland, said on Thursday that the Assad regime is still blocking aid convoys.

Egeland said there have been no deliveries since a token display of assistance to East Ghouta, where almost 400,000 people have been besieged for five years and face malnutrition, was allowed by the regime at the start of December.

“It’s an all-time low in giving us the facilitation letters,” Egeland said.

He called on Russia and Iran to press the regime to allow the deliveries to opposition areas, and for Russia, Turkey, and Iran to ensure a ceasefire in northwest Syria.

Syria’s Idleb province is filled to the brim with displaced civilians who already fled violence. The war there must stop before it is too late. We cannot have war in and on refugee camps and hospitals. https://t.co/iPb96ItyJx