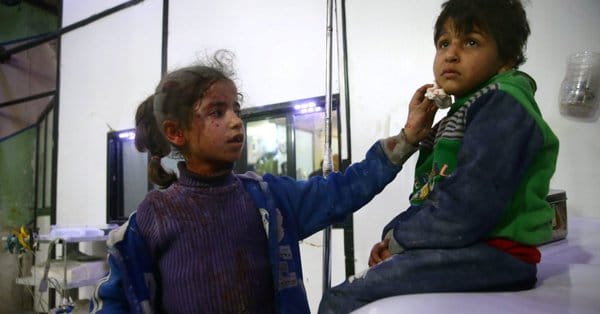 Another White Helmets rescuer has been killed:

We lost another hero today " Mahmoud Alkilani" a volunteer of @SCDrifdimashq in #EasternGhouta, killed after the brutal air raids targeted the civilinas and SCD teams during there humanitarian duty in #Otaya city in #BesiegedGhouta. #RIP #Heroes #SaveGhouta pic.twitter.com/1jVbZVsHlj

Pro-Assad attacks continued on Tuesday on East Ghouta, near Syria’s capital Damascus, despite Russia’s PR proclamation of a “humanitarian pause”.

Residents, rescuers, and activists said the Assad regime and its allies continued bombing, shelling, and rocketing before and after — and even during — the Russian-declared lull from 9 am to 2 pm.

Ghayath Abu Laith, an Arabic teacher from Douma, said, “The situation did not change….Shelling and airstrikes have not stopped.”

“Reconnaissance aircraft, warplanes and helicopters have not left the skies over East Ghouta,” Mahmoud said.

“I was waiting for you”. Child says to White Helmets volunteer when he dug them out of the rubble. h/t @mahmoudadam87. 27 Feb 18 #ChildrenUnderAttack #EasternGhouta pic.twitter.com/3y685CcYcK

Pro-Assad forces continued to pursue a ground offensive near Harasta, but are struggling to advance and appear to be taking heavy casualties. A video posted from a pro-Assad activist on Tuesday showed the bodies of numerous troops in a trench.

Fighting continued overnight for the town of Hawsh al-Dawahira and nearby farms.

Footage of pro-Assad fighters during the “pause”:

Both the Assad regime and Russia set the pretext for the ongoing attacks by proclaiming, without evidence, that rebels had shelled the “evacuation corridor” announced by Moscow on Monday.

Russian Deputy Foreign Minister Sergey Ryabkov continued the effort on Wednesday morning: “These are the militants, including terror groups, who counter the government and are creating problems linked to prioritization of this decision. There are also forces supporting the anti-government opposition in Syria behind it.”

Russian State media declared, “The second humanitarian pause in Eastern Ghouta in Syria started with a mortar attack by the militants.”

Meanwhile, diplomatic sources confirmed that the Organisation for the Prohibition of Chemical Weapons has opened a formal investigation into whether the Assad regime used chlorine in an attack that killed a young girl and wounded 17 people on Monday.

“A Question of Life and Death”

Having watered down a UN Security Council resolution for a 30-day ceasefire, removing any timetable for implementation, the Russian Defense Ministry announced the pause on Monday. However, the edict did not apply to the other 19 hours of the day, and it made no commitment to allow assistance into the area, where scores of people died from lack of food and medicine even before the recent surge in the pro-Assad assault.

Aid agencies said on Tuesday that the daily five-hour window is too limited for any convoys to be arranged.

“It is a question of life and death….We need a 30-day cessation of hostilities in Syria as the Security Council demands,” Jens Laerke, of the UN Office for the Coordination of Humanitarian Assistance, told a briefing in Geneva.

Pro-opposition journalist Firas Abdullah derided the “evacuation corridors” as propaganda to cover the attacks: “No one left, no one entered — there has been nothing of this sort.”

Moscow pursued similar tactics in and near opposition-held eastern Aleppo city in 2016. After establishing a siege from July and continuously bombing targets, including medical facilities and a UN aid convoy, Russia held back any freeze on the assault by proposing the “humanitarian pauses” for a portion of each day and by proclaiming the “humanitarian corridors”. The opposition part of the city finally capitulated in December.

The escalation of pro-Assad attacks from February 18 on East Ghouta, preparing for an invasion of the territory held by the opposition since 2012, have killed more than 630 people and wounded more than 3,300.

A report from CNN’s Arwa Damon about life in the besieged, bombarded area:

Turkey Feuds With US Over Ceasefire for Afrin

Turkish officials have hit back after the US State Department urged Ankara to implement a ceasefire for the Kurdish canton of Afrin in northwest Syria, where Turkey and Syria rebels have been pursuing an offensive since January 18.

On Tuesday, State Department spokeswoman Heather Nauert said the UN Security Council’s resolution for a 30-day ceasefire applied throughout Syria, including Afrin: “Turkey is more than welcome to go back and read the exact text…and [I] would suggest that they do so.”

Turkish Foreign Ministry spokesperson Hami Aksoy responded on Tuesday, “The comments made by the US State Department spokesperson regarding the UN Security Council’s resolution, saying Turkey should “read it more closely”, have no basis. [The comments] also show that they have not understood the focus of the resolution, or that they are trying to spin it.

Referring to East Ghouta, Aksoy said, “We urge the US to focus on stopping the regime from attacking innocent civilians instead of making statements that help terrorists.”

On Monday, Aksoy denied a claim by a Pentagon spokesperson that the US and Turkey are in diplomatic talks over the Afrin situation.

The Foreign Ministry spokesman also lashed out at a “dishonest” French summary of a phone call between President Emmanuel Macron and Turkish counterpart Recep Tayyip Erdoğan.

Paris said the call covered a humanitarian ceasefire for “all of Syria, including Afrin”. Aksoy responded, “Mr. Macron did not make reference to Afrin.”