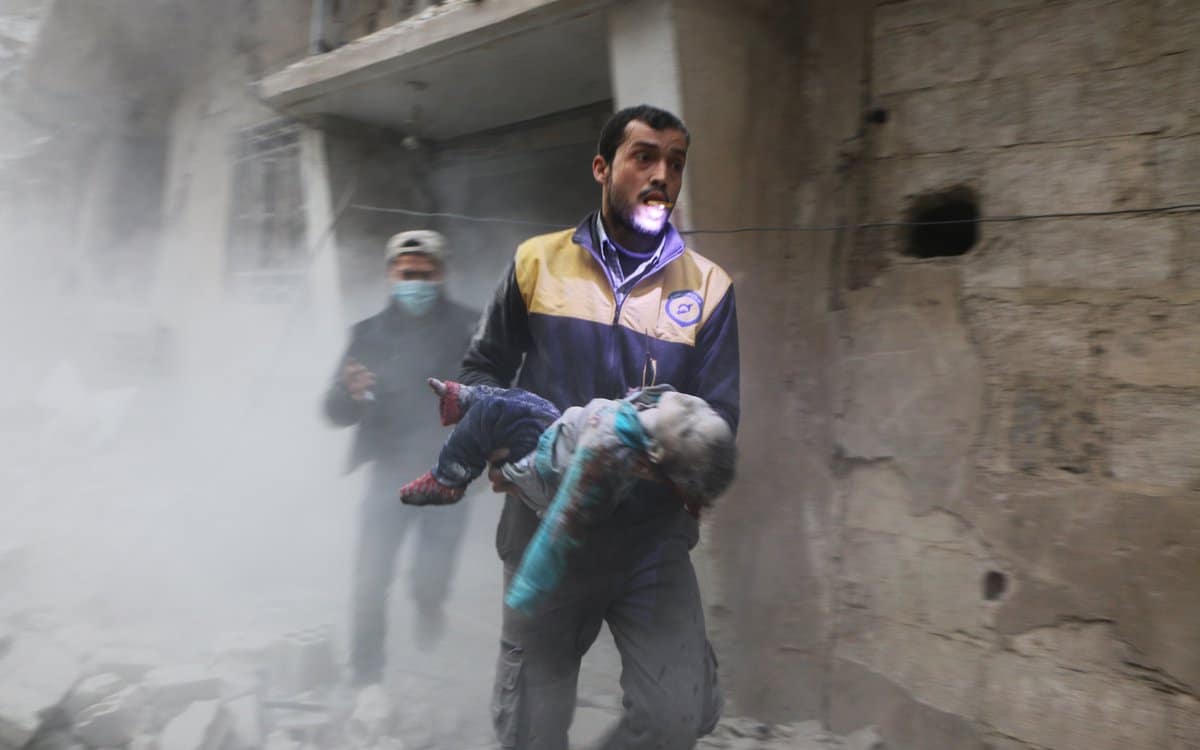 Airstrikes and artillery fire on the rebel-held suburbs east of Syria’s capital Damascus have killed at least 15 civilians since Sunday, while Civil Defense members tell Syria Direct that they are struggling to carry out search-and-rescue operations due to the frequency of bombings that stretch well into the night.

“We can’t keep up with all of this,” Siraj Mahmoud, a Syrian Civil Defense spokesman in East Ghouta, told Syria Direct on Sunday, as pro-government airstrikes and artillery fire fell on the encircled suburbs.

“We can’t [keep fully accurate records], and nobody else can either,” said Mahmoud. “We don’t have time.”

Approximate statistics kept by the Civil Defense report that airstrikes and shelling have killed at least 446 East Ghouta residents and left more than 3,000 injured since the most recent government bombing campaign began on December 29, Mahmoud told Syria Direct on Monday.

#Eastern_Ghouta The destruction of residential neighborhoods within the city of #Arbin as a result of #Assad regime bombing the city using surface-to-surface missiles. #GhoutaIsBleeding #Syria pic.twitter.com/h1hvEW9vKk

“You Search For Injured By Listening for Voices”

Two Civil Defense members in the besieged enclave tell Syria Direct this week that while it is difficult to stay apace with the bombings in the day, working in the dark of night hinders nearly all of their operations: monitoring the skies for planes, searching for survivors trapped under rubble and triaging the injured.

At night, Civil Defense members “cannot see the site of the strike”, Muayad al-Hafi, a first responder in the city of Saqba, told Syria Direct. “You must search for the injured by listening for their voices.”

Instead, Civil Defense members must rely on headlamps or small flashlights to pull injured residents from the rubble of collapsed buildings. The beams light up thick dust in the air, reducing visibility.

As a result, “it is difficult to assess injuries” in order to properly triage bombing victims, said Civil Defense volunteer Abu Fahd.

Both Abu Fahd and Muayad al-Hafi, Civil Defense volunteers in the East Ghouta towns of Misraba and Saqba, told Syria Direct that their teams do not use floodlights or any other high intensity illumination due to the risk of additional, “double tap” strikes on the same location.

Report from France’s TF1 on the destruction in East Ghouta:

The UN is receiving reports of first responders and paramedics killed “after second, third or fourth rounds of airstrikes apparently deliberately targeted places that had already been hit,” said UN Commissioner for Human Rights Zeid Ra’ad al-Hussein in a February 10 statement on bombardment of East Ghouta and northwest Syria’s rebel-held Idlib province.

“Even by Syria’s atrocious standards, these are exceptionally deplorable developments,” said Al-Hussein in the statement from Geneva, “and a cruel irony given that both [East Ghouta and Idlib] have been declared ‘de-escalation areas.’”

The East Ghouta suburbs, which the Syrian Arab Army (SAA) and allied forces encircled in 2013, are home to an estimated 400,000 residents. The besieged enclave is one of four regions across the country included in a Russian- and Iran-brokered de-escalation deal, announced last May.

Last year’s de-escalation deal does not include the Ha’yat Tahrir al-Sham (HTS) rebel alliance — formerly known as Jabhat a-Nusra, Al-Qaeda’s Syrian affiliate — which maintains a presence in the western and southern sections of East Ghouta, Syria Direct reported in August.

Russian ambassador to Syria Alexander Kinshchak told Russian state news outlet TASS on Saturday that it is “difficult to foretell the dates when the situation in East Ghouta will normalize”, given HTS’s current presence in the besieged pocket.

Syrian State media did not report any airstrikes on East Ghouta in the past 48 hours. However, state news agency SANA claimed on Sunday that “armed groups violated the de-escalation agreement in East Ghouta” by launching mortar shells into eastern districts of the Damascus, killing one resident in the Jaramana neighborhood.

“Units with the Syrian Arab Army responded to the attack by launching precise strikes deep into East Ghouta that destroyed fortifications and launch pads,” read the the SANA report.

While bombings continue, day and night, people like Douma resident Ismael Yaseen are spending “days without sleep”, kept awake by fear and the sound of explosions.

Yaseen’s home in Douma was destroyed by an airstrike on Thursday night, he says, but he and his family survived. On Saturday night, two days later, Yaseen says he heard eight missiles land near the building where he is now staying.

Even as the missiles landed nearby, after days without rest “we could not resist the fatigue and fell asleep, despite it all”, Yaseen tells Syria Direct.