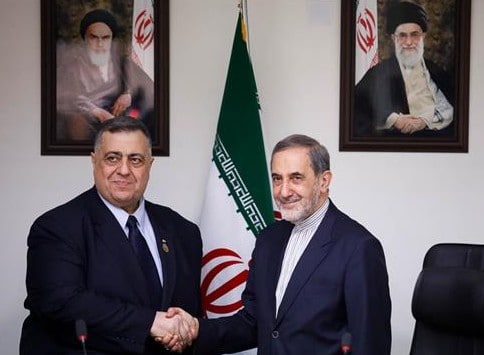 Top Iranian officials have proclaimed ongoing support for Syria’s leader Bashar al-Assad while denouncing a US proposal for a 30,000-strong border force.

The Supreme Leader’s top aide, Ali Akbar Velayati, put out the latest statement on Wednesday after a meeting with the Speaker of the Syrian Parliament Hammouda Youssef Sabbagh. He hailed “growing relations” between the two countries, as Sabbagh said, “Major plots hatched against Syria were all foiled through Iran-Syria cooperation.”

Earlier in the day, Foreign Minister Mohammad Javad Zarif saw Sabbagh and extolled “the resistance of the Syrian government and nation against plots and their victory against terrorists”, while claiming that this victory had prompted the US and Israel to pursue new “destructive plans”.

On Tuesday, President Hassan Rouhani used a photo appearance with the Syrian representative to deride the US proposal for the border force, half of which will be drawn from the American-backed, Kurdish-led Syrian Democratic Forces to bolster positions along the Turkish and Iraqi frontiers.

Rouhani said, “The plot that the Americans have recently hatched for Syria is against international law and…against the territorial integrity and security of Syria and the region.”

The US plan is also facing objections from Turkey, which considers leading Syrian Kurdish groups to be part of the Turkish Kurdish insurgency PKK; the Assad regime’s other essential ally Russia; and the Syrian opposition.

Iran’s Speaker of Parliament Ali Larijani reinforced the message on Wednesday, telling reporters, “[The American] presence in Syria can be a dangerous plot but they are unlikely to do something important except doing vexing jobs.”

“Nazanin Zaghari is serving her prison sentence and there’s no discussion about freeing her,” Esmaili told the semi-official Jamaran news agency.

The prosecutor said that the charity worker, seized in April 2016 during a visit to Tehran and later sentenced to five years, is “also being investigated by court judges in another open case but no date has been set for the trial”.

Last week former UK Foreign Secretary Jack Straw said, after meeting Iranian officials in Tehran, “We made strong representations about the need for Mrs. Zaghari-Ratcliffe, and another gentleman [78-year-old Kamal Foroughi], to be released on compassionate grounds.”

Th only other known British citizen currently jailed in Iran is Kamal Foroughi, a 78-year-old male who has been serving a seven-year prison sentence in Tehran’s Evin Prison since 2011. He is currently eligible for release.

Hopes had risen in December that Zaghari-Ratcliffe might be freed, following the visit of British Foreign Secretary Boris Johnson to Iran, but were soon pushed aside by Iranian officials. The Revolutionary Guards and Iranian State media have broadcast a series of unsupported and distorted claims to justify not only holding Zaghari-Ratcliffe, who works for the Thomson Reuters Foundation, but to extend her sentence.

The Guards have arrested at least 30 dual nationals since the July 2015 nuclear deal. At least 12 dual and foreign nationals are still behind bars.