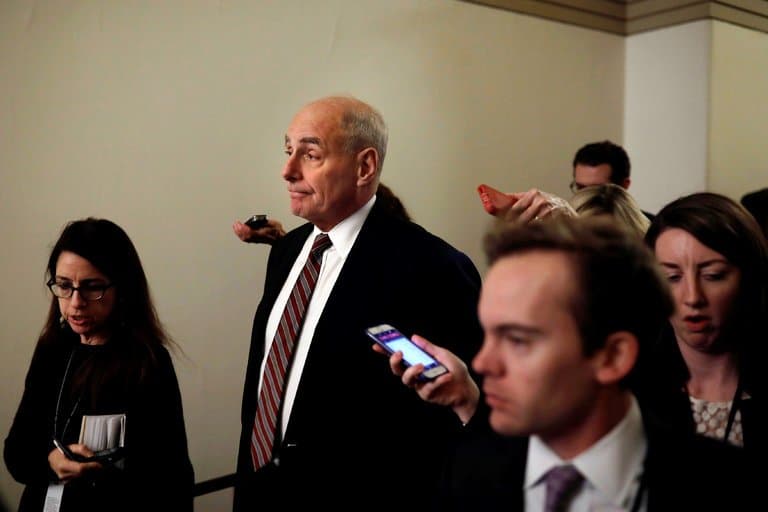 Developments on Day 364 of the Trump Administration:

Chief of Staff: Trump Not “Fully Informed” About Wall

White House Chief of Staff John Kelly tells Democratic lawmakers that Donald Trump had not been “fully informed” during the 2016 campaign when he promised a 2,000-mile wall along the Mexican border last year.

Amid maneuvers for a Congressional deal on immigration — complicated by Trump’s racist comments about people from “shithole countries” last Thursday — Kelly told members of the Congressional Hispanic Caucus that he had persuaded Trump that the full barrier was not necessary.

Kelly’s statement cuts against the public stance of Trump. The President is continuing to insist on Twitter and in meetings that The Wall must be fully funded, in return for any legislation establishing the right to remain in the US for almost 800,000 young undocumented “Dreamer” immigrants.

Trump did say at last week’s immigration meeting, with both GOP and Democratic legislators, that the full Wall could be modified because parts of the border are impassible.

Kelly expressed confidence that negotiations among senior members of Congress could preserve the protections of the Deferred Action for Childhood Arrivals program, ordered by Barack Obama in 2012: “There’s no doubt in my mind there’s going to be a deal, so long as men and women on both sides are willing to talk.”

In September, Trump said he would work with Democrats to ensure passage of the legislation. At the same time, he ordered the termination of the Obama-era DACA program by March 5.

Last week a federal judge in California blocked the termination, averting the immmediate threat of deportation of hte Dreamers.

Trump snapped last weekend that “DACA is probably dead because the Democrats don’t really want it”, claiming that they would prefer to shut the Federal Government down when supplementary funding expires on Friday.

Kelly pursued a way forward, according to Democratic Representative Luis Gutiérrez, telling the Hispanic Caucus that “a 50-foot wall from sea to shining sea isn’t what we’re going to build”.

But other legislators at the meeting said Kelly had depicted Trump as having “evolved, in the general context of the Wall and DACA….You make campaign promises; that’s different from governing….[He] realizes what the realities are, and that they are no longer considering the wall to be what was described in the campaign.”

AG Jeff Sessions on immigration reform: "What good does it do to bring in somebody who's illiterate in their own country, has no skills, & is going to struggle in our country & not be successful? That is not what a good nation should do, and we need to get away from it." pic.twitter.com/JwOBmbAG0P

In late 2017 Edelman shared photos of Perry and Murray, a major energy industry donor to Donald Trump, with journalists.

One showed the embrace. Another was of the cover sheet of a confidential “action plan”, brought by Murray to the meeting last March, calling for policy and regulatory changes friendly to the coal industry.

The day after the photos were published by the magazine In These Times, the Energy Department put Mr. Edelman on administrative leave, seized his personal laptop, and escorted him out of the building.

Edelman has filed a complaint with the Energy Department’s Inspector General and is seeking protections provided to federal whistle-blowers.

Tillerson on Trump’s Tweets: How Do We Build These Into Our Foreign Policy?

Secretary of State Rex Tillerson has explained how Donald Trump’s tweets are making US foreign policy, with the State Department having to react to whatever message Trump has chosen to spread to the world on a given day.

Tillerson explained how, because he has no social media accounts, he is unaware for some time of what Trump has written. Staff then update him — “five minutes” or “an hour” later — and he considers a response.