TrumpWatch, Day 328: “I Would Have Won Alabama” — Trump Blames Everyone Else for Senate Loss 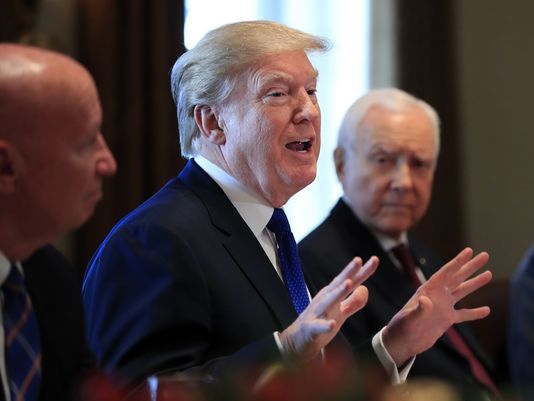 “If you can figure out how to screw up a state as red as Alabama, you can lose basically anywhere.”

Developments on Day 328 of the Trump Administration:

See also How Trump Dismissed Russia’s Role in 2016 Election — and How He is Ignoring the Threat Now
Podcasts: A Victory for Decency in Alabama

Trump: “I Said Roy Moore Will Not Be Able to Win”

Donald Trump is blaming everyone except Donald Trump for the dramtic victory of Democrat Doug Jones in the Alabama Senate special election.

In a state carried by Trump by 28% over Hillary Clinton last November, Jones had a 1.5% margin over Roy Moore, the controversial Republican candidate accused of sexual misconduct with teenagers and of derogatory remarks about Muslims, homosexuals, African Americans, women, and Jews.

According to “a senior administration official”, an angered Trump insisted on Wednesday morning, “I won Alabama, and I would have won Alabama again.”

Trump told advisors that he did not want the results to be seen as a referendum on him, but he asked if he still had a solid base of support in Alabama, which has not had a Democratic Senator since 1992.

Congratulations to Doug Jones on a hard fought victory. The write-in votes played a very big factor, but a win is a win. The people of Alabama are great, and the Republicans will have another shot at this seat in a very short period of time. It never ends!

But as he awoke to Wednesday’s coverage, Trump tried to disown any responsibility for the shock setback. He threw Moore under the bus as he revisited his endorsement — alongside “establishment” Republicans — of interim Senator Luther Strange in September’s Republican primary:

The reason I originally endorsed Luther Strange (and his numbers went up mightily), is that I said Roy Moore will not be able to win the General Election. I was right! Roy worked hard but the deck was stacked against him!

Both sides waged battle in White House leaks to media about the run-up to the Alabama result. Trump reportedly grumbled about Senate Majority Leader Mitch McConnell, whom Bannon is trying to push out, saying he had been too aggressive in trying to push out Moore. In contrast, Trump supposedly faulted Bannon for selling him “a bill of goods” and he faulted Moore as an abysmal candidate.

Other unnamed sources turned against Chief of Staff John Kelly and political director Bill Stepien. Some said Deputy Chief of Staff Rick Dearborn will be reassigned to the Commerce Department.

The battling camps also replayed Trump’s endorsement of interim Senator Strange over Moore, and his subsequent swing behind the judge after the Republican primary.

“To me, getting behind Luther was inconsistent with who we are and how we got here,” said “one source familiar with the internal discussions”.

But Josh Holmes, former Chief of Staff to Senate Majority Leader McConnell, “If you can figure out how to screw up a state as red as Alabama, you can lose basically anywhere.”

Trump Backing Bannon in the War?

The “#WAR” now moves to other states, with Bannon and Breitbart putting up insurgent challengers to incumbent Republicans, and trying to fill seats left by retiring “establishment” Senators such as Bob Corker of Tennessee and Jeff Flake of Arizona.

Trump left a vague message on Wednesday about his place in that battle:

If last night’s election proved anything, it proved that we need to put up GREAT Republican candidates to increase the razor thin margins in both the House and Senate.

Aides said Trump spoke with Bannon for about 15 minutes on Tuesday.

And yesterday Trump appeared to give some backing to Breitbart’s campaign against the “establishment”. He said that “a lot of Republicans feel differently” than him over Moore’s demise: “They feel very happy about the way it turned out.”

Breitbart maintains the pressure this morning by featuring the far-right agitator Ann Coulter: “Alabama ‘Was a Disaster Starting with Mitch McConnell’; GOP Must Prioritize ‘Winning Issue’ of Immigration, Building the Wall”.

At his annual press conference, Putin tried to dismiss the contacts as normal: “It is a globally recognized practice when diplomats, even government officials, meet with all the candidates, their teams to discuss certain issues, and development prospects. What is wrong with that? Why should it evolve into spy hysteria?”

Putin did not address any of the specifics of the numerous meetings, which have already led to the guilty plea of two Trump staff — former National Security Advisor Michael Flynn and “foreign policy advisor” George Papadopoulos — amid the investigation of Special Counsel Robert Mueller.

The President gave a convoluted defense of Russia’s interference through social media and propaganda by State outlets during the election:

You saw the investigation concerning social networks. Advertising of our companies accounted for second decimal places while US companies, in terms of advertising, were represented by 100, 200, 300%. These are incommensurable things. But some seem to think it is still too much. The same can be said about the situation with our mass media. Their share in the overall volume of information is next to zero as compared with what the US global media is doing across the world and in Russia.

The same can be said about the situation with our mass media. Their share in an overall volume of information is next to zero as compared with what the US global media are doing across the world and in Russia. And even this is seen as a threat. So, what about the freedom of information, a founding stone of the American democracy?

He maintained that revelations about the extent of Russia’s intervention, including hacking and dissemination of material damaging to Democratic nominee Hillary Clinton, were “invented by the people who are in opposition to Trump to make his work illegitimate”.