BBC Radio: A Victory for Decency in Alabama 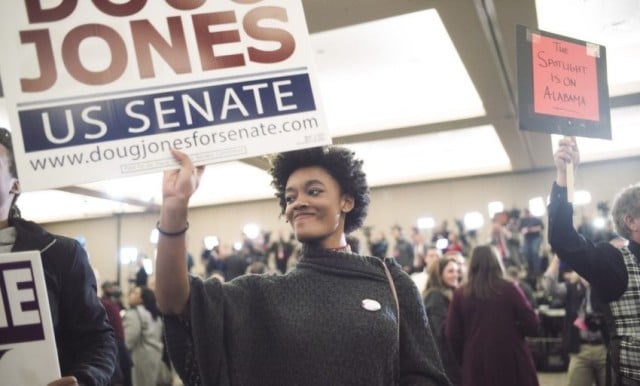 I have been commenting on British radio and TV throughout the day on the victory of Democrat Doug Jones, over controversial Republican Roy Moore, in Tuesday night’s Alabama Senate special election.

The analyses cover not only the significance for Alabama and the US but for the future of Donald Trump amid allegations about his own behavior.

Listen to Discussion with Emma Barnett on BBC Radio 5 Live

We had to ask whether political expediency had overtaken any regard for moral behavior. The sign from last night is that some people aren’t willing to go that far.

There’s also consideration of the question, “What’s it like to be a Democrat in Alabama?”, and of how Donald Trump’s intervention might have backfired:

Last week when Trump went to a very contentious rally on the Alabama border — when he repeated his lines about “fake news”, “fake media”, about America’s enemies, about standing up to attacks on all sides — it reinforced the idea that he was speaking to only part of America and, I hate to say it, the “white” part of “America”.

Where does Trump go from here for anything which is “Make America Great Again”?

There’s also discussion of what Democrat Doug Jones has brought with his campaign and victory: “Don’t underestimate that this is a man who brought the idea that we need to bring decency and tolerance and not division, not only to Alabama but also to the rest of America.”

While there were serious issues about the conduct and attitudes of Roy Moore, for which he got punished, Donald Trump had made this election about him as well.

If the feud among Republicans continues into 2018, that further damages the party as it goes into mid-term national elections and paralyzes it as it tries to get any kind of legislation through Congress….

This should be the opportunity for the Democrats…but they’ve got to show the ability to bring people together.

The Democrats’ taking this seat is stunning.

What it means immediately for American politics is that the Republicans now have almost no majority in the Senate, so they will have difficulties passing their tax cuts and even the Trump budget.

What it means morally is even greater. This race was surrounded by claims that Roy Moore has carried out inappropriate sexual behavior. He has made inappropriate comments about Jews, about African-Americans, about women. He has said homosexuality is a crime.

The politics is important but, for me, the moral messages are equally so.

The turning point last night was that African Americans turned out, and they did so in massive numbers….Among that community — which has a lot of historic issues about the American South and has been on the sharp end of some of what Roy Moore has said and what the right-wing media who support Moore have said — this is a positive sign of what can be done in America.

The idea that there is a lot of apathy in America and that people have been crushed day after day by President Trump’s tweets or his statements or by attack sites like Breitbart — I think we can dispel that this morning. There is an active discussion this morning in America about the way forward.