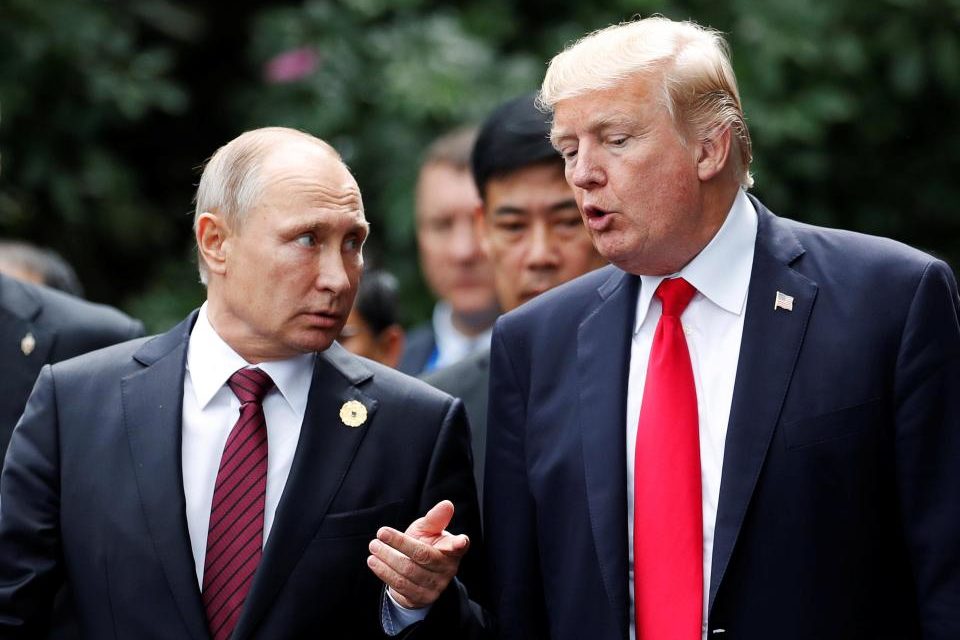 In an article based on interviews with more than 50 former and current US officials, Greg Miller, Greg Jaffe, and Philip Rucker of The Washington Post detail Donald Trump’s refusal to acknowledge Russian interference in the 2016 Presidential election, and how Trump is still pushing aside any response to Moscow’s actions:

In the final days before Donald Trump was sworn in as president, members of his inner circle pleaded with him to acknowledge publicly what U.S. intelligence agencies had already concluded — that Russia’s interference in the 2016 election was real.

Holding impromptu interventions in Trump’s 26th-floor corner office at Trump Tower, advisers — including Trump’s son-in-law, Jared Kushner, and designated chief of staff, Reince Priebus — prodded the president-elect to accept the findings that the nation’s spy chiefs had personally presented to him on Jan. 6.

They sought to convince Trump that he could affirm the validity of the intelligence without diminishing his electoral win, according to three officials involved in the sessions. More important, they said that doing so was the only way to put the matter behind him politically and free him to pursue his goal of closer ties with Russian President Vladi­mir Putin.

“This was part of the normalization process,” one participant said. “There was a big effort to get him to be a standard president.”

But as aides persisted, Trump became agitated. He railed that the intelligence couldn’t be trusted and scoffed at the suggestion that his candidacy had been propelled by forces other than his own strategy, message and charisma.

Told that members of his incoming Cabinet had already publicly backed the intelligence report on Russia, Trump shot back, “So what?” Admitting that the Kremlin had hacked Democratic Party emails, he said, was a “trap.”

As Trump addressed journalists on Jan. 11 in the lobby of Trump Tower, he came as close as he ever would to grudging acceptance. “As far as hacking, I think it was Russia,” he said, adding that “we also get hacked by other countries and other people.”

As hedged as those words were, Trump regretted them almost immediately. “It’s not me,” he said to aides afterward. “It wasn’t right.”

Nearly a year into his presidency, Trump continues to reject the evidence that Russia waged an assault on a pillar of American democracy and supported his run for the White House.

The result is without obvious parallel in U.S. history, a situation in which the personal insecurities of the President — and his refusal to accept what even many in his administration regard as objective reality — have impaired the government’s response to a national security threat. The repercussions radiate across the government.

Rather than search for ways to deter Kremlin attacks or safeguard U.S. elections, Trump has waged his own campaign to discredit the case that Russia poses any threat and he has resisted or attempted to roll back efforts to hold Moscow to account.

Trump has never convened a Cabinet-level meeting on Russian interference or what to do about it, administration officials said. Although the issue has been discussed at lower levels at the National Security Council, one former high-ranking Trump administration official said there is an unspoken understanding within the NSC that to raise the matter is to acknowledge its validity, which the President would see as an affront.

Trump’s stance on the election is part of a broader entanglement with Moscow that has defined the first year of his presidency. He continues to pursue an elusive bond with Putin, which he sees as critical to dealing with North Korea, Iran and other issues. “Having Russia in a friendly posture,” he said last month, “is an asset to the world and an asset to our country.”

His position has alienated close American allies and often undercut members of his Cabinet — all against the backdrop of a criminal probe into possible ties between the Trump campaign and the Kremlin.