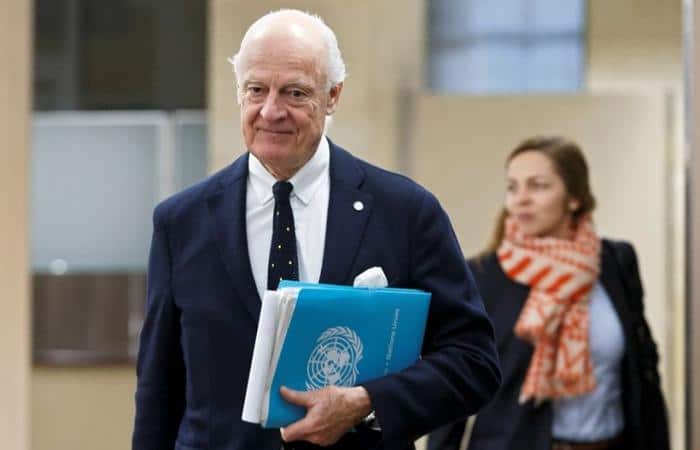 De Mistura: “You can think you win territory militarily but you have to win the peace”

UPDATE 1600 GMT: The head of the Assad regime’s delegation, Bashar al-Ja’afari, has again rejected direct talks with the Syrian opposition.

After a meeting with UN envoy Staffan Mistura, Ja’afari also tried to bury any mention of the future of Bashar al-Assad through his assertion, “Most of the sessions of the current round in Geneva focused on the need to cancel the…Riyadh 2 statement” of the opposition.

De Mistura warned on Wednesday that failure of talks in Geneva could lead to “a fragmentation of Syria”. Asked what signal Russian President Vladimir Putin — who declared “victory” in a visit to western Syria on Monday — could offer, he said:

Convince the [Syrian] government that there is no time to lose….You can think you win territory militarily but you have to win the peace.

And to win the peace, you have to have the courage to push the government to accept that there has to be a new constitution and new elections, through the United Nations.

De Mistura opened the latest set of Geneva discussions on November 26. The regime delegation delayed its arrival for 24 hours and then walked out after only three days, protesting at any mention of Bashar al-Assad’s future.

The group, led by UN Ambassador Bashar al-Ja’afari, returned to Geneva last Sunday, but there is little indication of any advance on the four areas of discussion: governance, a new Constitution, elections, and “fighting terrorism”. The opposition High Negotiations Committee said on Tuesday that the regime is refusing to enter into direct talks.

De Mistura confirmed yesterday, “The government is not ready, it has said it is not ready to meet the opposition. That is regrettable but diplomacy has many means.”

Russia has said that it will convene a “national congress” among Syrian groups, but the initiative has been repeatedly delayed, in part because of Turkish objections to the presence of leading Kurdish factions such as the Syrian Kurdistan Democratic Party (PYD). The meeting is now vaguely scheduled for “early 2018”.

Meanwhile, despite Putin’s declaration of a partial withdrawal of Russian forces in his “victory” speech on Monday, Moscow is bolstering its permanent presence with plans to extend the naval base at Tartous on the Mediterranean. Russia is also continuing airstrikes in support of pro-Assad attacks on opposition territory, despite proclaiming “de-escalation zones” throughout Syria.

Rouhani Talks Up Cooperation with Turkey Over Syria

Rouhani met Erdoğan on the sidelines of an Organization of Islamic Cooperation in Istanbul, where Iran and Turkey have both been trying to rally Islamic opinion against Donald Trump’s recognition of Jerusalem as the capital of Israel.

The Iranian President focused on Syria in his remarks, portraying a way forward with Turkey — which has been a long-time backer of the opposition and rebels — and Russia, the main backer alongside Iran of the Assad regime. He said his recent summit in Sochi in southern Russia with Erdoğan and Vladimir Putin “proved that with each other’s cooperation positive steps can be taken towards solving the region’s problems”.

Despite their cooperative mission in propping up the Syrian regime, Russia and Iran have differed on the future of its leader Bashar al-Assad. While Tehran has been set against Assad’s departure, Russian officials have said that they are committed to a political transition in which he may leave while the regime remains.

Unconfirmed reports are circulating of a “grand bargain” in which Russia and Turkey are arranging with Saudi Arabia, another prominent backer of the opposition, for Assad to leave in 2021 — the end of his current, token seven-year term in office — as elections are held.

Unnamed sources in Washington have also said that the Trump Administration envisages Assad remaining in office until 2021.