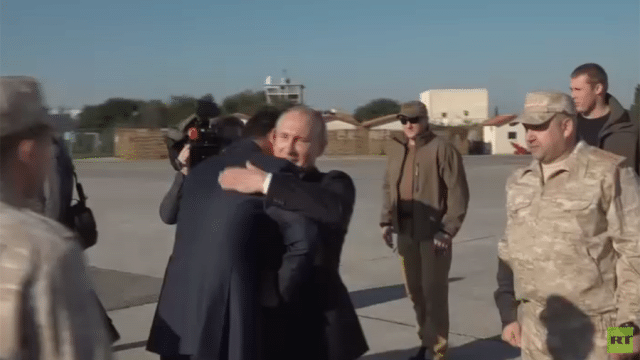 President Vladimir Putin made an unannounced visit to Russia’s Hmeimim Airbase in western Syria on Monday, proclaiming to military personnel that the Russian mission had been accomplished in the country.

En route to meetings with Egyptian President Abdel Fattah al-Sisi in Cairo and with Turkish President Recep Tayyip Erdoğan in Ankara, Putin declared that Russian personnel had joined pro-Assad forces in defeating “the most battle-hardened grouping of international terrorists”.

Putin said again that “a significant part” of the Russian force will be withdrawn.

Since Russia’s military intervention in September 2015, the President has repeatedly said that troops will be scaled down, only for Moscow to escalate its air and ground activities. His appearance yesterday followed reports that Russian warplanes were involved in more attacks on rebels and the Hayat Tahrir al-Sham bloc in northeastern Hama Province and southern Idlib Province in northwest Syria, despite Russia’s proclamation of a “de-escalation zone”.

The return of a military police battalion to Russia on Tuesday:

Alongside the proclamation of withdrawal, Putin announced a permanent Russian presence in Syria at the Hmeimim airbase and the Tartous naval facility on the Mediterranean.

Putin was greeted at the base by Russian Defense Minister Sergey Shoygu and Bashar al-Assad, who was then placed in the background by Russian officers as Putin advanced to greet a Russian commander and make his speech.

Uncertainty About Next Russian Moves

Putin’s domestic objective with the appearance may have been his pursuit of re-election in March. Russia’s next steps in the 81-month Syria conflict are less defined.

On the one hand, Moscow remains an essential political, economic, and military backer of the Assad regime. On the other, Russian officials have given indications that they may step away from Assad, if not the regime, in return for a political resolution and international assistance with reconstruction of regime-held areas.

Assad’s other key ally, Iran, is wary of any move for the departure of the Syrian leader. Tehran has also backed the regime’s demand for recapture of opposition-held territory, including Idlib Province in northwest Syria, and of some Kurdish-held areas in the east.

The divergence in Russian and Iranian views could complicate Moscow’s main political path through the talks in Kazakhstan’s capital Astana, which also include Turkey. A Russian proposal for a National Congress of Syrian factions has been postponed several times, in part because of Turkish objections to the presence of leading Kurdish groups.

Turkish Foreign Minister Mevlüt Çavuşoğlu said on Tuesday, following Putin’s discussion with President Erdoğan, that Ankara will accept the participation of Kurds but not the YPG militia, the leading Kurdish force in Syria:

The YPG is not the sole representative of the Kurds. Actually it represents only a small portion of them….[The YPG] forces people into joining its armed group. Kurds currently cannot go back to the 20 percent of the Syrian lands controlled by the YPG. We are not against our Kurdish brothers, we stand with them.

Putin made no reference to these issues in his celebratory speech:

In just over two years, Russia’s armed forces and the Syrian army have defeated the most battle-hardened group of international terrorists….The conditions for a political solution under the auspices of the United Nations have been created. The Motherland awaits you.

However, after his talks with Turkey’s Erdoğan, Putin said, “We are conducting joint work to prepare and convene the Syrian National Dialogue Congress at the beginning of the next year. It is a secret to no one that I spoke about it with President Assad during my today’s visit to Syria.”

Pentagon spokesman Eric Pahon was skeptical about Putin’s statement: “Russian comments about removal of their forces do not often correspond with actual troop reductions, and do not affect US priorities in Syria.”