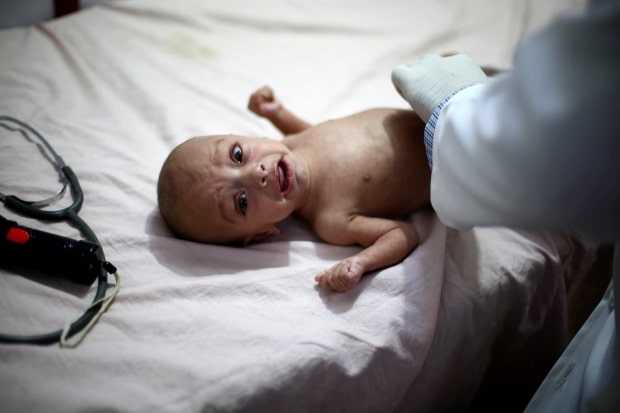 “Situation is getting worse day by day”

The UN has again called on the Assad regime to allow evacuation of the sick from the besieged East Ghouta area near Syria’s capital Damascus.

The children’s agency UNICEF appealed on Sunday for the immediate transfer of scores of suffering children. It said five have reportedly died, while 137 others — ranging from seven months to 17 years —- require immediate medical assistance.

"They caused no harm in their life. Can the men who sit on this list please sign it off so that our ambulances can take them out of this hellish place?" Watch @NRC_Egeland, Special Advisor to @UN Envoy in #Syria at @UNGeneva Press Stakeout on #EasternGhouta pic.twitter.com/rE1utZub75

“The situation is getting worse day by day,” said Fran Equiza, UNICEF’s representative in Syria. “The health system is crumbling and schools have now been closed for almost a month. Sick children desperately need medical evacuation and many thousands more are being denied the chance of a normal, peaceful childhood.”

The Assad regime has denied permission for almost all aid to East Ghouta, which has been besieged and bombarded for four years. The siege has been tightened this year on the area’s 390,000 residents, with the closure of tunnels and the last checkpoint for passage of supplies. The UN has warned of a “complete catastrophe”, with many people — including about 12% of children — facing acute malnutrition and death from medical conditions.

UNICEF’s Equiza called for “unimpeded, unconditional and sustained humanitarian access” across Syria: “Now is the time for all sides to do the right thing and to stop the violence.”

Putin made yet another declaration that he ordered the withdrawal of Russian troops, saying this followed the defeat of “the most battle-hardened grouping of international terrorists”.

Since Russia’s military intervention in September 2015, the President has repeatedly said that troops will be scaled down, only for Moscow to escalate its air and ground activities.

Putin was greeted at the base by Russian Defense Minister Sergey Shoygu and Bashar al-Assad. After the visit, the Russian President will have talks with Egyptian President Abdel Fattah al-Sisi in Cairo, and a meeting with Turkish president Recep Tayyip Erdoğan in Ankara.

The delegation, led by the regime’s UN Ambassador Bashar al-Ja’afari, had left on December 1 after only three days in indirect negotiations with the opposition. Ja’afari insisted that there must be no mention of Bashar al-Assad’s future in the discussions.

The return was announced yesterday in a two-paragraph announcement on State news agency SANA.

Pro-Assad forces, including Russian warplanes, are stepping up attacks against rebels in northeastern Hama Province and threatening the neighboring, opposition-held Idlib Province in northwest Syria.

Rebels and witnesses reported dozens of airstrikes by Russian jets in the last 48 hours in northeast Hama and southern Idlib. Free Syrian Army factions and the Islamist bloc Hayat Tahrir al-Sham said they are sending reinforcements to regain control of a string of villages in northeast Hama near the town of Rihjan.

The area is supposed to be part of a “de-escalation zone” announced by Russia, Turkey, and Iran this summer. However, the air and ground attacks are being justified on the the pretext that they are all against Hayat Tahrir al-Sham. HTS includes Jabhat Fatah al-Sham, the faction formerly known as Jabhat al-Nusra which was linked to Al Qa’eda until July 2016.

Islamic State fighters have also been attacking HTS and rebels in eastern Hama Province. Pro-opposition activists says the assaults by ISIS, which has been retreating elsewhere in Syria, have been enabled by regime support.

The pro-Assad offensive’s first strategic goal is to retake Abu al-Dhour military airport, one of the largest in the north of the country. The complex was heavily bombed on Sunday.

Rebels took almost all of Idlib Province in 2015. More than two million Syrians who remain in the country are estimated to live in the territory.

Turkey has moved forces into Idlib, in part to establish a frontline with the Syrian Kurdish canton of Afrin. Ankara has maintained silence so far on the pro-Assad attacks.