Iran Daily: Tehran — We Will Have Long-Term Military Presence in Syria 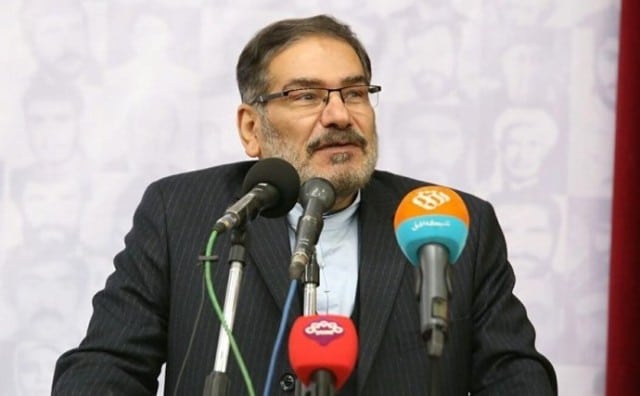 “As long as necessary, we will have a presence”

Iran’s officials have reiterated that they will maintain a long-term military presence in Syria after preventing the fall of the Assad regime.

The Secretary of the Supreme National Security Council, Ali Shamkhani (pictured), gave the latest assurance at a press conference in northwest Iran: “Based on the request of the legitimate government of Syria, we will continue our presence and advisory assistance until all terrorist groups in this country are destroyed.”

The language echoed Bashar al-Assad’s language on Monday, following a meeting with a high-level Russian delegation, that pushed aside focus on a political resolution in favor of a renewed military campaign against the opposition and possibly against Kurdish groups: “The war on terrorism will only end when the last terrorist in Syria is eliminated, at which point there can be realistic talk of victory.”

Russia has also pointed to its long-term stay in Syria, planning for a permanent naval base on the Mediterranean and claiming part of the Syrian energy sector. However, it has been more cautious than Iran about support of an Assad regime campaign to crush the opposition, rather than reaching a negotiated settlement.

Shamkhani bolstered Iran’s line by accusing the US and its regional allies of supporting terrorism and separatism in the region and asserting, “Claims by the Zionist regime or other countries will also have no effect on the Islamic Republic of Iran’s calculations and decisions in pursuing its national interests and regional security.”

Victory in Iraq, Syria, Lebanon, and Yemen will continue as long as the resistance coalition defends its achievements. And as long as necessary, we will have a presence in these countries….We must assist these countries and establish a barrier against the American influence.

Hamid Baghaei, a Vice President in the Ahmadinejad Administration from 2011 to 2013, has been sentenced to 63 years in prison over misuse of public funds.

Tehran’s Justice Department said the verdict was reached on Tuesday.

Baghaei was under legal pressure soon after Ahmadinejad’s term ended in 2013. He was detained for months in 2015 and again briefly in July.

In the latest round of a battle with Mahmoud Ahmadinejad, head of judiciary Sadeq Amoli Larijani has ordered his staff to publish details about the legal cases filed against the former President.

Larijani was responding to Sunday’s video ultimatum from Ahmadinejad demanding publication of documents proving accusations against him and his allies. Ahmadinejad, who was President from 2005 to 2013, threatened to release incriminating evidence about the judiciary within 48 hours.

The head of judiciary said, “While avoiding quarrelsome disputes, we should respond to misgivings and clarify doubts up to the required necessary point.” He jabbed at Ahmadinejad’s camp claiming that “fake news” and information based on “human rights excuses” had presented some of the “convicts” as “heroes”.

Earlier in the day, Prosecutor-General Mohammad Jafar Montazeri described Ahmadinejad’s two-term presidency as a period of lawlessness and lies.

Since he was President, Ahmadinejad has been in a bitter dispute with the Larijani brothers, including Sadeq; Speaker of Parliament Ali; and high-ranking judiciary official Mohammad Javad. The battle has escalated this autumn, as allies of Ahmadinejad such as former Vice President Hamid Baghaei have been threatened with detention.

In his latest video, Ahmadinejad denounced his description by Sadeq Larijani as “seditionist” and “devious”:

Our chief judge is openly, continuously committing the greatest of sins, that is defamation, slander against innocent people. He no longer serves justice….As a result, the judiciary has lost its credibility.

The former President and his companions have written the Supreme Leader asking him to intervene and assign Ayatollah Mahmoud Hashemi Shahroudi — chairman of the Expediency Council, deputy speaker of the Assembly of Experts, and a former head of the judiciary — to assess the legal charges.

Ayatollah Khamenei has not responded in public.