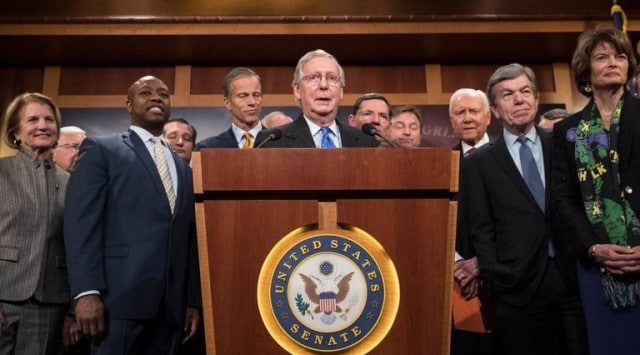 Developments on Day 334 of the Trump Administration:

The Senate endorsed the bill in a 51-48 vote on party lines. It is expected to be endorsed by the House, which voted earlier Tuesday, after three minor changes and then sent to Trump for his signature.

The measure reduces the top tax rate from 39.6% to 37% and the corporate rate from 35% to 21%. The exemption from estate tax for inheritances is doubled to $11 million for an individual and $22 million for married couples. Owners of “pass-through businesses”, whose profits are taxed through the individual code, will be able to deduct 20 percent of their business income. However, deductions for state and local taxes are sharply reduced, affecting people in states such as New York and California.

The bill is estimated to raise the Federal Government’s deficit by $1.4 trillion in coming years. Because of that burden, individual tax cuts will expire after 2025 to comply with budget rules, which do not allow the package to add to the deficit after a decade.

Republicans also used the measure to smuggle in other major legislation that they have sought for years and even decades. The Arctic National Wildlife Refuge in Alaska is opened to oil and gas drilling, despite environmental concerns. The individual mandate — which requires people to have health insurance or face financial penalties — has been stripped from the Affordable Care Act, following the GOP’s failure this summer to repeal ObamaCare.

Critics have also noted that the bill’s provision will enrich a number of Republican lawmakers and Trump, notably through favorable tax treatment of real estate investments.

White House Press Secretary Sarah Huckabee Sanders insisted, “I know that there are a number of provisions that would negatively impact the president personally.”

Republicans may also face fallout in the mid-term 2018 Congressional elections. Polls have shown that more than 40% of Americans oppose the tax changes, with less than 30% in favor.

But for now, Trump is celebrating after 11 months without a significant legislative accomplishment.

The United States Senate just passed the biggest in history Tax Cut and Reform Bill. Terrible Individual Mandate (ObamaCare)Repealed. Goes to the House tomorrow morning for final vote. If approved, there will be a News Conference at The White House at approximately 1:00 P.M.

States such as Connecticut have been using leftover funding from the federal government but this is now exhausted.

Connecticut officials said they will thy to help children get health insurance through the state’s ObamaCare exchange or examining if they qualify for Medicaid, while encouraging parents to schedule preventive care visits and other medical appointments and refill medications before January 31.

Alabama has announced it will freeze enrollment in its CHIP program starting January 1. In late November, Colorado started sending notices to families saying the program will end January 31 without new money from Congress.

James Clapper, Director of National Intelligence from 2010 to 2017, has said that Russian President Vladimir Putin — a “great case officer” when he was with the KGB — “knows how to handle an asset and that’s what he’s doing with the President”:

Former Director of National Intelligence James Clapper: Vladimir Putin "knows how to handle an asset and that's what he's doing with the President" https://t.co/1bOnWU9hVI

The White House is shutting down its website for petitions until a new one is set up in late January.

The “We The People” site was set up by the Obama Administration in 2011, promising a response to all petitions drawing more than 100,000 signatures. The Trump Administration has not responded to any since January.

The White House claimed a new platform will save taxpayers more than $1 million a year. An official said the administration will “respond to public concerns next year” and that all existing petitions would be reinstated then.

Since January, popular petitions that have drawn the required number of signatures for a response include a call for Trump’s resignation and a demand that he release his tax returns.

In 2015, in response to a petition posted on the site after the death of a transgender teenager, Barack Obama called for an end to “conversion therapy” for gay and transgender teens.