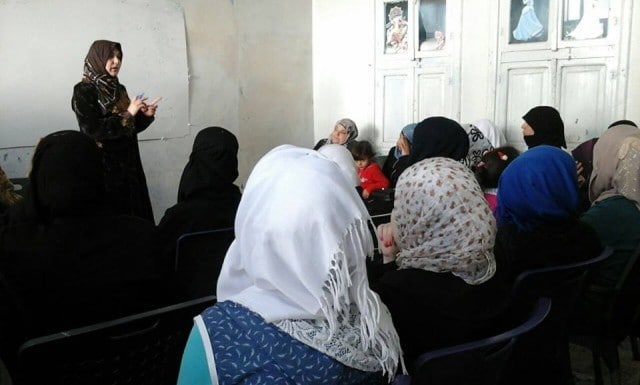 “My husband died for a revolution against injustice — not for someone to come and force injustice on us all over again.”

Madeline Edwards and Mohammad Abdulssattar Ibrahim report for Syria Direct on the approach of the hardline bloc Hayat Tahrir al-Sham, which is battling local opposition councils for governance of Idlib Province in northwest Syria:

The civil governance wing of the hardline Islamist group ruling northwest Syria published a strict new religious law this week requiring all widows in their territory to move in with a sharia-compliant male member of her family to serve as a guardian.

The Syrian Salvation Government released a statement on Wednesday announcing the decision, which it says is aimed to “preserve the reputation” of widows and single mothers.

The SSG is a civil authority formed in Syria’s northwestern Idlib Province in early November and is backed by the hardline rebel coalition Hay’at Tahrir al-Sham, which enforces a strict interpretation of Islamic law. A leading faction in HTS is Jabhat Fatah al-Sham, formerly Al-Qaeda’s Syrian affiliate.

Wednesday’s decision comes as the SSG enforces a months-long consolidation of civil and military power in Idlib Province. Earlier this week, the SSG released an ultimatum giving its main political rival in Idlib — the comparatively moderate Syrian Interim Government — 72 hours to cease all operations.

Since its founding in 2013, the SIG has been the primary civilian authority throughout most of opposition-held Syria. A system of administrative local councils established by the SIG operate schools, hospitals and other civil services on the ground.

The new law outlined in this week’s SSG statement now requires that widows move in with a muhram, a close male relative. Though the statement warns of punishment for “everyone who goes against this decision,” the mechanism for enforcement remains unclear.

A muhram is a male guardian required of women in some conservative Muslim communities or religious settings. For example, women travelling as pilgrims to Mecca need a male relative—a father, brother or other close family member—to accompany them throughout the trip in accordance with Saudi law.

Syria Direct reached out to the SSG’s Minister of Social and Displaced Affairs, Ali Amer, who declined to explain how the muhram law would be enforced and punished. A “clarifying statement will be released soon”, he said, but did not elaborate on when.

Muznah al-Jundi, director of a women’s advocacy center in Maarat al-Num’an, 30 km (19 miles) south of Idlib city, said on Thursday she “rejected the decision completely.” Her center, a branch of the Women Now organization, teaches career skills to widows and wives of detainees — though largely undercover, al-Jundi said, as she fears backlash from local HTS fighters.

“What if a widow has nobody to be her muhram — how will she be treated now?”

One of the women impacted by the new muhram ruling is 35-year-old Umm Hashem, a single mother of two. She lives with her teenage daughter and 11-year-old son in a makeshift displacement camp in Idlib Province, where the family sought shelter after Syrian government forces evacuated them from embattled east Aleppo city one year ago.

Umm Hashem used a pseudonym, and requested Syria Direct not share the exact location of the camp she lives in, for fear of reprisal by HTS fighters stationed in the area.

“He went out to help rescue people from beneath the rubble” after an airstrike hit their neighborhood, she told Syria Direct from the camp in Idlib on Thursday. “But soon the airstrikes returned and hit the same spot.”

“He was killed instantly.”

Umm Hashem today lives alone in the Idlib displacement camp, the sole guardian for her two children. In the camp, she said she relies on food handouts, sympathetic neighbors and “the mercy of God.”

Even if Umm Hashem followed the latest SSG directive, which she told Syria Direct she “isn’t considering”, she said she has no nearby male relatives with enough income to house her and her children.

“Nobody is in any sort of condition to take me in,” added Umm Hashem. “Despite my hardship in the camp, staying here is more merciful.”

“My Husband Did Not Die For Injustice”

Abu Qassem, a displaced father of five in Idlib city, echoed Umm Hashem’s sentiment. Like Umm Hashem, he left east Aleppo alongside his wife, children, and widowed sister one year ago as government forces captured the besieged district from rebels. He too requested anonymity for fear of reprisal.

In Idlib, the 31-year-old works odd jobs and has no steady income to support his children and sick wife. His sister lives with her five children outside Idlib, in a makeshift displacement camp near the Turkish border. She went there soon after arriving in Idlib province from Aleppo, in the hopes of finding easier access to international aid and education programs for her children.

Thanks to this week’s muhram decree, Abu Qassem’s sister soon may have little choice but to move in with him in Idlib city. The move, said Abu Qassem, is an expense he simply cannot afford.

“I have nothing” to offer, he said on Thursday from his home in Idlib. “If they were really concerned about widows, they’d provide money or housing.”

“All I care about is helping my children live a happy life and keep up with their studies,” Umm Hashem said. “If the authorities actually cared, they’d help out with our expenses and a place to live.”

Umm Hashem, herself from a conservative Muslim background in east Aleppo, said she isn’t opposed to the morals behind the SSG decision — that a single woman like her should seek the protection of a male guardian.

“But I don’t agree that it should be forced on everyone like this,” she told Syria Direct on Thursday afternoon, from the displacement camp in rural Idlib.

“After all, my husband died for a revolution against injustice — not for someone to come and force injustice on us all over again.”