The Sadness of Those Who Remain in Damascus 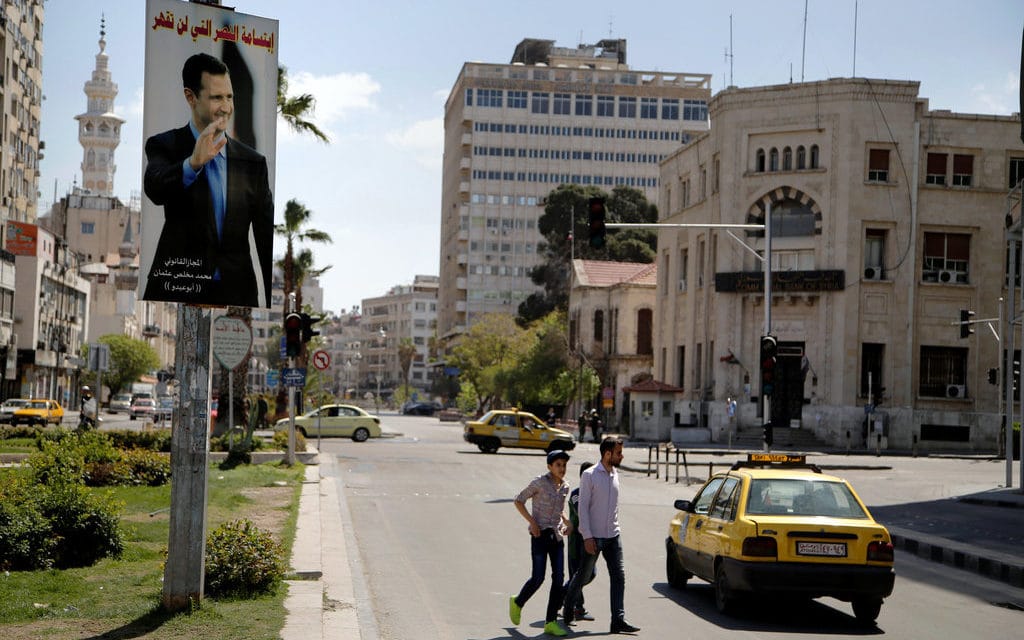 “We feel like strangers. We are living in the same place but we have lost the people who lived here.”

On a cool evening in early November, in a back room of the Damascus Opera House, a women’s choir was rehearsing an old favorite, a sunny ballad from a childhood cartoon. When they reached the chorus — “How sweet it is to live in one house, how sweet to live in one hometown” — one of the singers, Safana Baqleh, began to weep into her hands.

The song reminded her of all that she had lost. Her closest friends had either left Syria or blocked her on Facebook over political disagreements. Sometimes, the solitude felt crushing. “I want to take my baby for a walk, but I have no one to visit,” Ms. Baqleh said. “No one. Absolutely no one.”

After more than six years of war, nearly a fourth of all Syrians live in exile. The loneliness of those who remain hangs like thick fog over Damascus, the capital. Lifelong Damascenes wonder why they are still here, when so many friends and family have packed up, died or disappeared. Newcomers, displaced by the war, move cautiously, unsure about their fate, or who is who.

The Morphing of Damascus

I traveled to Damascus recently on a rare visa issued to an American journalist. I was almost always accompanied by a government-registered escort, which seemed to make some people reticent, and there were parts of the city I wasn’t allowed to visit.

Still, it was impossible not to notice how Damascus had been altered since pro-democracy protests erupted nearly seven years ago, only to be crushed by President Bashar al-Assad and then morph into a civil war that scattered Syrians across the world and turned their country into a chessboard for more powerful countries.

In recent months, Mr. Assad’s forces, helped by Iran and Russia, have reclaimed much of the country from insurgents. There are fewer checkpoints in Damascus than before, the streets are bustling later into the evenings and electricity has been completely restored. Still, some afternoons, government forces blast artillery into rebel enclaves on the city’s edge; in retaliation, rebels fire shells into the narrow lanes of the old section of the city, not long ago killing a shopkeeper playing backgammon with his neighbor.

In a park in the city’s center, families who fled the latest war zones sit with plastic bags and babies. A soldier sits in the bushes, keeping a close eye on everything and everyone.

On the main highway, shiny new restaurants cater to people who have enriched themselves during the war. In the middle of the workday, you walk in to find men in track suits silently smoking water pipes, watching everyone. And yet nearby, Damascenes who could once afford new clothes look through piles of secondhand sweaters because prices have shot up beyond reach. In a certain city market, I was told, the spoils of war show up for sale: refrigerators, pipes, chandeliers, all looted from towns recently reclaimed by the military. (I did not have a permit to visit the market myself.)

“We Need Things to Bind Us”

Every time I asked Syrians how they explained the events of the past seven years to their children, I was struck by how even the most garrulous among them fell into silence, or just shook their heads. They struggled to explain it to themselves.

Ms. Baqleh, 35, who is also a professional harpist, couldn’t say why she remained in the country. She knew only that she couldn’t stand the idea of living as a refugee abroad, seen as someone who needs charity rather than someone who belongs. So she stayed and tried to make a difference. She taught music. She sang. She volunteered at an animal shelter. Dogs and cats not only have been wounded in the war, she said, but also mutilated by children who had learned unspeakable cruelty.

“We need things to bind us,” she said. “We need each other.”

For their spring concert, the women’s choir — the Gardenia Chorus, they called themselves — had chosen a repertoire of wedding songs representing the many peoples of Syria: songs in Arabic, Kurdish and Circassian, songs from places now synonymous with ruin, like Aleppo and Hama.

The conductor, Ghada Harb, 43, said it was their way of preserving a culture at risk of ruin. Also, she said, she hoped the songs would remind Syrians “to be accepting of each other.”

The war had changed how she moves through the city. If a car with black windows cuts her off in traffic, she is reluctant to press her horn or complain out loud. There’s no telling who could be inside, or how they might react. One day, as she waited in a long line for fuel, she watched as a man in army fatigues angrily started slashing the plastic fuel containers that people had brought with them. She had no idea what set him off.

“The trace of war stays inside us,” she said. “We are working. We continue. But something inside us is sad and broken. We are very humiliated.”

At this, she began to cry.

We were sitting in a busy, brightly lit restaurant in a well-off part of the city. Waiters went from table to table, bearing enormous platters of grilled chicken, tabbouleh, onion rings. Water pipes were lit. Pomegranate juice was served.

“We feel like strangers,” she said after a while. “We are living in the same place but we have lost the people who lived here.”

“No One is the Same”

In the narrow lanes of the old city, dominated by Hezbollah, the Lebanese Shiite militia and militant group that backs Mr. Assad, funeral posters announce the deaths of smiling young men. Men in their 20s and 30s, subject to military service, are the likeliest to leave, so much so that some employers say they prefer to hire and train young women instead. “Pack Your Bags” is the name of a television serial, a comedy.

To remain in the country is especially stinging for those who once agitated against Mr. Assad’s authoritarian government. They find it hard to square the uprising they joined and the violence that followed, the kidnappings, car bombs and government sieges so crippling that children starved in Yarmouk, a Palestinian enclave in the heart of the capital. Or they find that their onetime friends spurn them.

“If they know your political affiliations,” Hala al-Chach, a businesswoman, said, “they treat you like someone who smells.”

The conflict has made violence numbingly ordinary.

An art dealer, Samer Kozah, lives in his ancient family house, surrounded by the works of artists who have fled.

In the past, young artists would trickle into his shop on Friday afternoons to show him their work, or just to talk about art and sip Mr. Kozah’s Nescafé. Now there are hardly any artists left. Mr. Kozah, who established a gallery in his home 23 years ago, helped many of them establish themselves elsewhere — Beirut, Vienna, Paris.

“I feel, sometimes, I don’t want to call it depression. I feel boring,” he said. “My mind is slowing down.”

Mr. Kozah and his wife, Olga, a jewelry designer, left for a while, too, only to be pulled back home earlier this year. He said he missed walking along the narrow warrens of the old city, greeting his neighbors, on his way to Nowfara, his favorite cafe. He missed the orange tree in his courtyard. He missed the quiet of the mornings. When there are no bombs, he said, you can still hear birds.

I asked him how the city had changed, which struck me as a harmless question, but it made him burst into tears. His wife left the courtyard where we were sitting.

One of her brothers disappeared four years ago and hasn’t been heard from since, Mr. Kozah said softly after she was out of earshot. Her father’s jewelry shop was looted clean.

“Everybody has a story,” he said. “Somebody died. Somebody lost their house. I walk here. I smell the jasmine, I go to Nowfara. I drink tea. Everybody, their faces changed. No one is the same.”