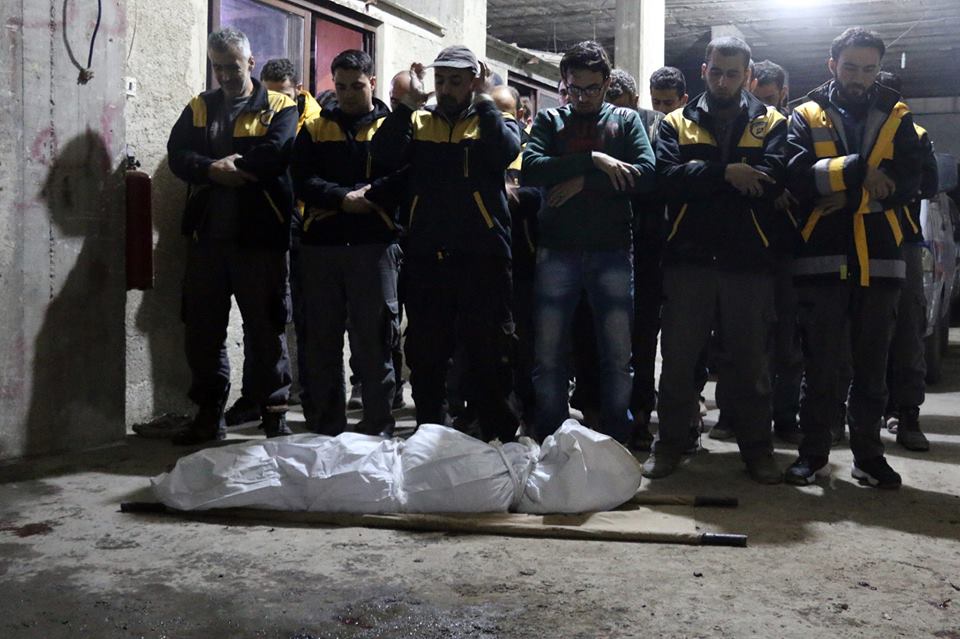 For a sixth straight day, pro-Assad forces stepped up shelling and rocketing of civilian areas near Syria’s capital Damascus on Sunday.

The Assad regime’s military, supported by Russia, carried out more strikes despite the Russian proclamation of a “de-escalation zone” this summer and even though talks between Russian, Iranian, and Turkish Foreign Ministers — in advance of a Wednesday meeting between the leaders of the three countries — were held yesterday.

Almost 100 people have been killed and more than 650 injured since Tuesday in the assault. On Sunday, victims included a volunteer rescuer, Aladdin Juha, slain by a cluster bomb near Hamouriya. He is the fourth White Helmet killed in the latest attacks.

Russia’s warplanes have joined the attacks, which began after rebels tried to storm a base near Harasta, the site of the Assad regime’s ongoing rocket assaults despite the de-escalation announcement.

The East Ghouta area near Damascus is home to about 400,000 people. The Assad regime has tightened its four-year siege, closing tunnels in March and the last checkpoint through which supplies passed in July. The UN has warned of a “catastrophe”, saying that many people — including up to 1,500 children — are at imminent risk of malnutrition and even starvation. Doctors says one person is dying each day from siege-related conditions.

The Russian, Iranian, and Turkish Foreign Ministers made no comment about the attacks as they met in Antalya on Sunday.

Instead, Turkey’s Mevlüt Çavuşoğlu praised the talks in the Kazakh capital Astana, pursued since January by the trio:

The Astana Process has yielded positive results in Syria with regard to declaring the ceasefire, establishing de-escalation zones and decreasing tension in the war-torn country. The situation on the ground is far better compared to last year.

We now have to concentrate on a political process, while continuing to target terrorist organizations like Daesh [the Islamic State].

Russian Foreign Minister Sergei Lavrov said, “The parties agreed on all issues,” and noted that military officials from the three countries will discuss de-escalation zones.

A commander of the Free Syrian Army’s Jaish al-Izza faction, fighting in northern Hama Province, explains how the group’s money and supplies from foreign funders has been cut off.

Raid Jameel Salih says the faction was offered money if it stopped battling the Assad regime’s troops but refused:

We are not prepared to stop fighting the regime and we won’t as long as it is in power and massacring and killing our families.

A local source explains that the “funders” were “CIA, or better stated, Gulf States under US restrictions, going back many years”. He says that the funders under US supervision, including Turkey, began to “blackmail rebels into useless talks” since the Obama Administration entered political negotiations with Russia after the Assad regime’s August 2013 sarin attacks near Damascus — even as the Assad regime and their allies continued with their bombing, sieges, and detentions.

Pro-Assad forces have again claimed the capture of the last Islamic State town in Syria, al-Bukamal in the east on the Iraq border.

A media outlet for Hezbollah proclaimed control on Sunday: “The Syrian Army and its allies in the axis of resistance have expelled Daesh from its last stronghold on Syrian soil.”

The Assad regime’s military initially declared “victory” more than two weeks ago, only for Hezbollah, Iranian-led foreign militias, and regime units to withdraw amid an Islamic State ambush.

The Islamic State has been pushed back to its final positions this year by a combination of offensives by pro-Assad elements, the Kurdish-led Syrian Democratic Forces, and rebels.

The pro-Assad forces entered Deir ez-Zor Province in eastern Syria at the start of September and quickly reached Deir ez-Zor city. Meanwhile, the SDF completed the capture of Raqqa, the Islamic State’s central position in Syria, after a four-month offensive.

Iran has acknowledged the killing of a Revolutionary Guards commander near al-Bukamal.

EA first reported over the weekend, from local sources, the death of Gen. Khairallah Samadi. Iranian media confirmed the news on Sunday, posting photos of Safadi with the head of the Guards’ elite Quds Force, Gen. Qassem Soleimani.

Reports said Samadi was killed by Islamic State mortar fire. Another Iranian fighter was also slain near the town of Mayadin.