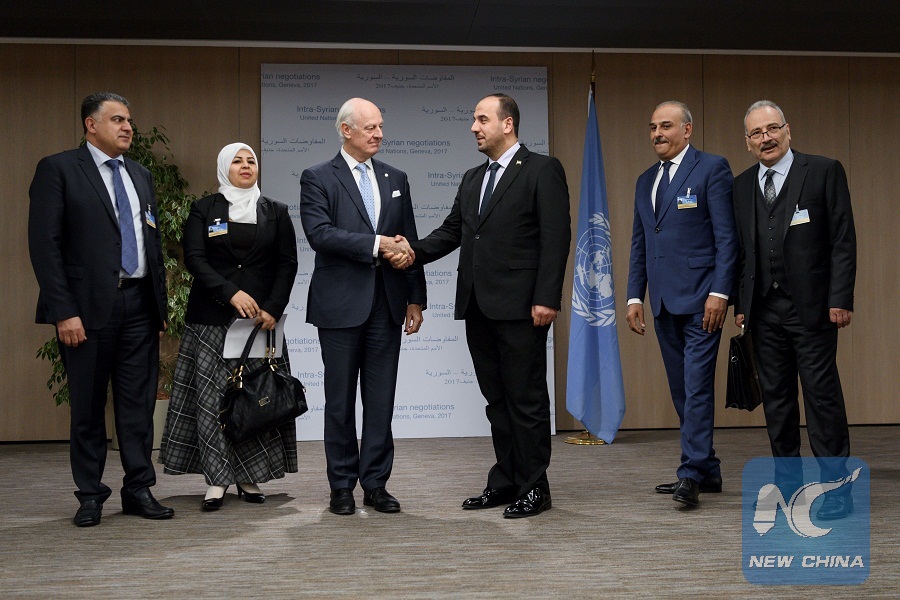 Syria’s opposition has called on Russia and other states to press Bashar al-Assad to engage in Geneva peace talks for a political solution within six months.

At the start of indirect discussions in Switzerland on Wednesday, the head of the High Negotiation Committee, Nasr Hariri told reporters:

The regime is holding out against any discussion of Assad’s future, delaying its arrival in Geneva by 24 hours until Russia assured that his removal would not be on the agenda.

The reformed HNC restated last week that Assad must depart. Turkey also said on Tuesday that the Syrian ruler could not remain by the end of a transition.

The talks will begin with four issues: elections, governance, a new constitution, and “fighting terrorism”.

Hariri also noted that the regime and Iranian-backed forces were continuing attacks on the East Ghouta area near Damascus, despite Russia’s agreement with rebels for a de-escalation zone.

The HNC said Russia had also declared a 48-hour ceasefire for Tuesday and Wednesday — an announcement from which the Kremlin later stepped back — only for more regime sassaults on the besieged opposition territory: “If the situation continues as it is now I think there is great danger in these agreements.”

At least five people were killed on Tuesday and there were more attacks yesterday on East Ghouta, where 390,000 people have endured four years of siege and bombardment. Local sources said the towns of Douma, Erbin, Misraba, and Ein Tarma were shelled, with at least one fatality.

Since November 19, an estimated 150 people have been slain in the pro-Assad airstrikes, shelling, and rocketing.

Hariri said his opening words to government negotiator Bashar al-Ja‘afari would be: “I hope despite all of the crimes which have been done in Syria, I hope that the regime can come ready to put the people of Syria first.”

Syrian State media SANA implicitly emphasized that the discussions did not involve Assad’s future, writing that De Mistura’s session with the regime’s UN ambassador, Bashar al-Ja’afari, “dealt with means of pushing the Syrian-Syrian talks forwards with the necessity of not putting any pre-conditions that could obstruct the dialogue or undermine it”.