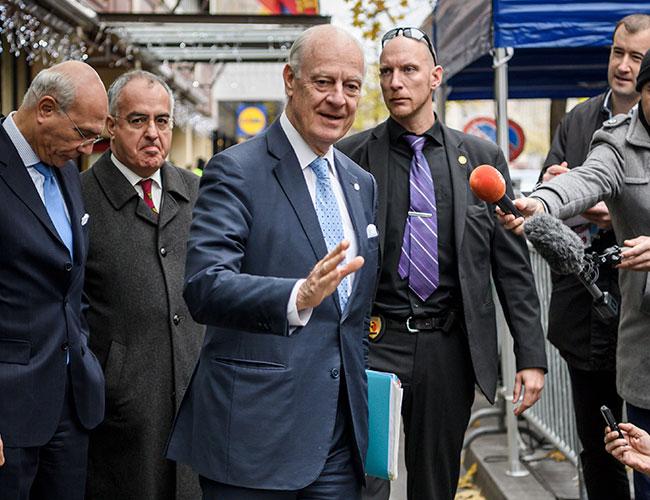 Indirect talks between the Assad regime and Syria’s opposition will resume on Wednesday in Geneva, after the regime ended a 24-hour holdout protesting any discussion of Bashar al-Assad’s departure.

The discussions were supposed to open Tuesday, after a reformed opposition High Negotiations Committee — including factions favored by Moscow — was established in Saudi Arabia last week. However, the HNC continued to maintain the demand that Assad must go at the start of a political transition. Turkey also restated the demand.

The regime then told UN envoy Staffan de Mistura that its delegation would not be in Geneva for the opening of the discussions. Russia reportedly intervened to ensure that the condition of Assad’s departure would not be mentioned as the two sides considered an agenda which will include a new constitution and Presidential and Parliamentary elections.

The Foreign Ministry finally announced Tuesday, “Following intensive contacts, held during the past two days between the Syrian and Russian sides, the Syrian Arab Republic decided to participate in the 8th round of the intra-Syrian dialogue in Geneva with a delegation headed by Syria’s permanent representative to the UN, Dr. Bashar al-Ja’afari.”

Russia’s plan for linked talks for a “National Congress” has been put on hold.

Moscow agreed with Turkey and Iran at the start of the month that the gathering of Syrian groups would be held in the Russian Black Sea resort of Sochi, initially scheduling the Congress for late November.

But the plan has foundered on Russia’s invitations to Kurdish groups, bringing Turkish objections. Even though Moscow stepped back from the inclusion of participants such as the Syrian Kurdish Democratic Union Party (PYD), it finally announced the postponement on Tuesday.

Turkey considers the PYD and its YPG militia to be part of the Turkish Kurdish insurgency PKK.

Claim: Top Iranian Commander to Troops in Syria “US Soldiers Pee Their Pants”

Video of Gen. Qassem Soleimani, the commander of Iran’s Quds Forces, claiming that he told troops in eastern Syria in a pep talk in mid-November:

Look at the American forces today. They are more than 1 million strong. But despite their numbers and their capabilities, they are cowards. When they arrived in Iraq, they brought diapers for their soldiers, so that they could urinate in them when scared.

You, on the other hand, have achieved victory with light weapons, Why? Because you are willing to make sacrifices.

Soleimani was in Syria for the final battle by pro-Assad forces, including Hezbollah and Iranian-led foreign militias, against the Islamic State in the town of al-Bukamal on the Iraqi border.

The video was translated by the Washington-based Middle East Media Research Institute, which said it was posted on-line by the “Syrian Army’s Allies’ Operation Room”.

Shelling and a double airstrike as White Helmets pursue rescue operations in Hamouriya in the East Ghouta area near Damascus:

Heavy shelling and a double air raid near the #Civil_Defense teams during the search and rescue operations for the target areas in the city of #Hmuriya in #EasternGhouta pic.twitter.com/pqtnauLlYO

Despite Russia’s declaration of a de-escalation zone for East Ghouta, pro-Assad forces have continued assaults as well as tightening a four-year siege. In the past two weeks, the attacks — sometimes including Russian airpower — have killed about 150 civilians.

On Tuesday, five more people, including a child, were killed, according to the Syrian Network for Human Rights.

Russia had announced a ceasefire for Tuesday and Wednesday, but the Kremlin later backed away from the declaration.

Did our children have to suffer and lose their life at the hands of those who don’t deserve to live?
A child is being pulled from beneath the rubble of her home after a regime air strike on residential areas in #Hamourieh city, #EasternGhouta pic.twitter.com/1xctn82z6T

A BBC report on the attacks and siege: