Syria Daily: Geneva Talks to Resume — But Will Assad Regime Show Up? 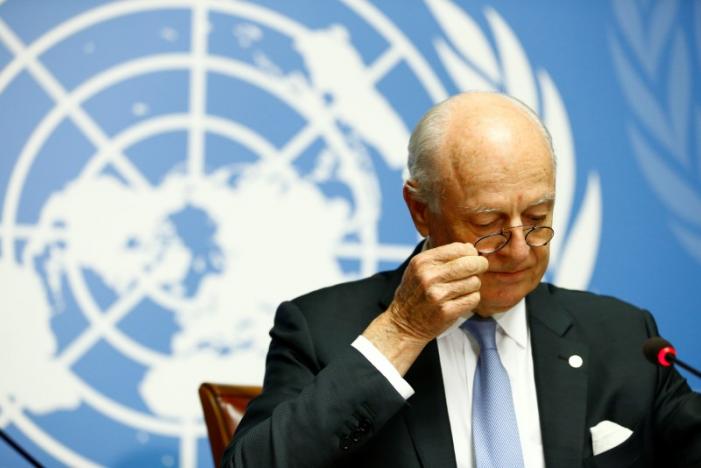 ORIGINAL ENTRY: Political talks over Syria’s conflict are set to resume in Geneva on Tuesday, but there are doubts over whether the Assad regime’s delegation will show up.

The delayed discussions were finally set last week when a reformed opposition bloc, including factions favored by Russia, was announced in Saudi Arabia. However, contrary to some expectation, the factions joined the reassertion by the High Negotiations Committee that Bashar al-Assad must leave power at the start of a transition.

Turkey — a long-time supporter of the opposition, but working with Assad backers Russia and Iran since last year — also said on Monday that Assad must depart. Prime Minister Binali Yıldırım told reporters during a visit to London, “The current regime is responsible for the way things have evolved in Syria … I don’t think it’s a realistic prospect to build lasting peace in Syria with Assad.”

The demand put a question mark over the regime’s attendance at the talks today, according to UN envoy Staffan de Mistura:

Talks are due to start again tomorrow.

Gov basically pissed oppo is coming back to the table with 'Assad must go' as baseline.

The English-language site of Syrian State media SANA has yet to post today on Geneva, but a Syrian newspaper reported on Monday that the regime delegation would delay its arrival.

The opposition had already warned that the Assad regime will refuse to engage seriously with the talks. “The Assad regime must not be allowed to play for time while people are being besieged and bombed,” said Yahya al-Aridi of the HNC on Sunday.

Changing the Israeli line, Defense Minister Avigdor Lieberman said Tuesday that there are no Iranian military forces in Syria.

Lieberman said, “We must preserve our security interests. It is true that there are a number of Iranian experts and
advisers, but there is no Iranian military force on Syrian land.”

Netanyahu has said that Iran is working on the construction of military bases in Syria, calling on Russia to ensure the withdrawal of all Iranian units and Iranian-led foreign militias from the country.

Asked about the discrepancy with Netanyahu, Lieberman said:

All the regional forces know we are the strongest power in the area. Israel is a regional power.

Iran has a strategy to creating proxies everywhere. Obviously, they are not physically in Lebanon, that’s what’s Hezbollah is for. In Yemen, they’re not physically present, they created the Houthi rebels. They have the same plan in Syria: creating different kinds of militias.

Last week, Russia said it would not promise the assurance of a withdrawal of pro-Iranian forces from Syria. Lieberman had responded, “We will not allow a Shi’ite and Iranian [presence] to be established in Syria and will not permit all of Syria to be turned into a front-line position against the State of Israel.”

On Monday, Lieberman and the head of Mossad hosted a meeting with Russian intelligence official Sergey Narishkin.

Russia has withdrawn its declaration of a two-day ceasefire for East Ghouta near Damascus, which is under regular and escalating bombardment by pro-Assad forces.

On Monday, the Russian Defense Ministry said it would call a ceasefire for Tuesday and Wednesday. Despite Moscow’s proclamation of a “de-escalation zone”, pro-Assad bombing, shelling, and rocketing — sometimes joined by the Russians — have killed about 150 people and wounded many hundreds in the past two weeks.

But on Tuesday, Kremlin spokesman Dmitry Peskov said there could be no ceasefire:

An operation against terrorists goes on, there is no way to make a ceasefire agreement with ISIS.

While Islamic State fighters are believed to be in the Yarmouk camp south of Damascus, they are not present in the East Ghouta area to the east and northeast of the capital.

I was just informed by the Russians today…that [they] have proposed and the [Assad] government has accepted a ceasefire on Eastern Ghouta because we were and are very concerned about it.

Now we need to see whether this takes place but it’s not coincidental that this has actually been proposed and agreed upon just at the beginning of this session.

The Assad regime’s military also acknowledged that it has again carried out attacks in the de-escalation zone in southwest Syria, claiming that it took part of the strategic Bardaia hill. The military justified the assault by claiming that it was against “Jabhat al-Nusra terrorists”.

Pro-Assad forces have been trying for more than a week to take the opposition-held Beit Jinn pocket near the Israeli-occupied Golan Heights.

The international medical organization Médecins Sans Frontières has warned of the casualties and “disaster” for people needing medical treatment from pro-Assad bombing and shelling of East Ghouta near Damascus.

MSF says five of its field hospitals responded to 24 mass casualty incidents between November 14 and 26. The toll so far is 69 killed and 576 wounded, with further intake in medical facilities that are not supported by MSF.

Of the victims, more than a quarter of those slain and 149 wounded are children under 15 years old.

A major field hospital in Kafr Batna was hit on November 20 by two rockets, destroying a water tank and solar panels, causing some damage to the in-patient department, and putting one ambulance out of service, MSF said. Another two field hospitals supported by MSF and a supported clinic temporarily suspended their non-emergency services between November 15 and 18 out of fear of exposing medics and patients to injury or death.

MSF said its reserve stocks of medicines and supplies are now exhausted or almost depleted.

Pentagon: We Are Reviewing “Adjustments” in Weapons to Kurdish Militia YPG

The Pentagon said on Monday that it is reviewing “adjustments” in weapons to the Kurdish militia YPG, the leading element in the US-supported Syrian Democratic Forces.

Following the SDF’s completion of the takeover of major Islamic State areas, including the city of Raqqa and parts of Deir ez-Zor Province — and amid pressure from Russia and Turkey — US agencies have been considering their future position.

But last Friday, Donald Trump overtook the review when — according to the office of Turkish President Recep Tayyip Erdoğan, with whom Trump spoke for more than an hour by phone — he said the US was cutting off all arms to the YPG.

The White House carefully said after that conversation that “consistent with our previous policy, President Trump also informed President Erdoğan of pending adjustments to the military support provided to our partners on the ground in Syria”.

The US helped create the SDF in autumn 2015 to push back ISIS throughout northern and eastern Syria. Turkey is opposed to the force because it believes the YPG and the Syrian Kurdistan Democratic Union Party (PYD) are part of the Turkish Kurdish insurgency PKK.

Turkish Deputy Prime Minister Bekir Bozdag said on Monday that Trump must honor his pledge, “The ‘We will not give weapons’ remark from a US President for the first time is important, but it will lose value if it is not implemented. It would be deceiving the world.”

But on Tuesday, Erdoğan offered encouragement to the US President, “The telephone call we had with Trump on Friday was the first in a long time where we were both on the same wavelength,” he told MPs of his Justice and Development Party.

Reports are circulating of a ceasefire between the Islamic State and the Kurdish-led Syrian Democratic Forces in eastern Syria, as the two sides try to negotiate a lasting arrangement.

Big if true: Reports, confirmed by @WaelEssam77, of a ceasefire agreement between the Islamic State & the US-backed SDF in Deir Ezzor. A military pause while negotiations between the two are concluded. Large number of civilians & local mediation seem to have made this possible. https://t.co/1fubCg7Pme

An SDF offensive, as well as a push by pro-Assad forces, has removed ISIS this year from all its major positions in Syria, including in Deir ez-Zor Province. Pro-Assad units are now trying to clear the Islamic State from areas south of the city of Mayadin on the Iraq border.

#BREAKING – English translation of #US Backed #SDF negotiate ceasefire with #ISIS in Hasakah, Northern #Syria to prevent hostilities between the two forces in specified areas. #ISIS is permitted to attack #Syrian government from their territories under ceasefire with #SDF. pic.twitter.com/FsZke8b7Kd