TrumpWatch, Day 279: Trump — “I Am A Very Intelligent Person” 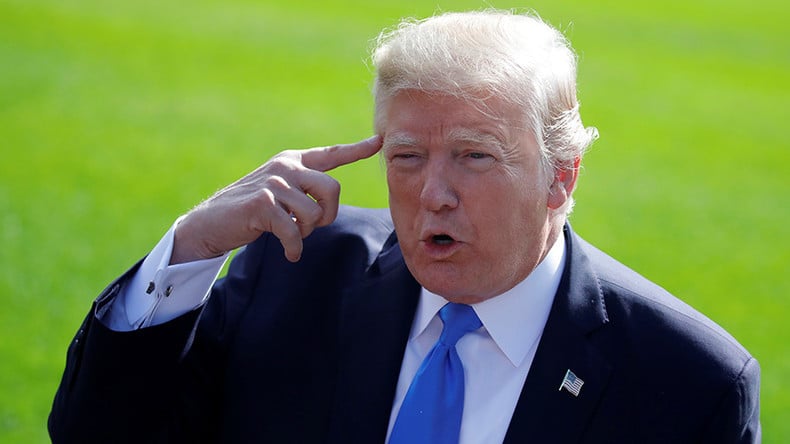 Trump’s rambling exaltation of himself and put-down of his foes, from GOP Senators to Hillary Clinton

Developments on Day 279 of the Trump Administration:

Both defending and promoting himself on multiple fronts, Donald Trump holds an impromptu press conference in which he proclaims his mastery despite controversy.

Trump touched on the furor over his belated response to the killings of four Green Berets in Niger, in which he broke a 12-day silence to lie about past Presidents, attacked a Florida Congresswoman, further lied about his eventual call to one of the Green Beret widows, and culminated nine days of headlines by effectively accusing the widow of not telling the truth.

He spoke about the growing rift within the Republican Party, as more GOP and Democrat figures — including Republicans Senators John McCain, Bob Corker, and Jeff Flake and former Presidents George W. Bush and Barack Obama — warn of the damage caused by Trump and his hard-right supporters.

Most of all, he spoke about how excellent Donald Trump is:

People don’t understand, I went to an Ivy League college. I was a nice student. I did very well. I’m a very intelligent person.

Later, denying that he could remember the name of slain Green Beret La David T. Johnson when he referred to him as “your guy” in the call to widow Myeshia Johnson, he pointed to his head and said, “One of the great memories of all time.” He continued, possibly undermining his claim:

“I was really nice to her. I respect her, I respect her family, I certainly respect La David, who I, by the way, called La David right from the beginning. They put a chart in front, La David, it says La David Johnson.

Trump said once again that no one gave him a chance to win the 2016 election but he won anyway. He referred to “my generals” and “my military”, even as he stepped back from them by saying that they did not inform him about the ill-fated Green Beret mission in Niger.

And, defying the escalation of tension within the Republican Party amid criticism of his leadership and the hard-right campaign of his former chief strategist Steve Bannon against the “establishment”, he insisted there is “great unity”. He repeated his Twitter claims that a Wednesday lunch with GOP Senators was a “lovefest”, in which he received “many standing ovations”.

Then, defying his denial that he is “uncivil”, Trump embarked on a long denunciation of Senator Jeff Flake, who made a passionate speech on the Senate floor on Wednesday night, decrying the state of US politics as he announced that he will not stand for re-election.

The other feature of the press conference was Trump’s parroting of attack lines, founded on distortion, to try and shift blame to 2016 Democratic nominee Hillary Clinton.

In the past week, Trump supporters including Fox TV and hard-right outlets have been pursuing a double assault. They have exaggerated and misrepresented the Obama Administration’s approval of the sale of a small US uranium company to Russian interests as a deal involving the Kremlin and the Clinton Foundation.

Then the activists seized upon the argument that the Democratic National Committee funded the gathering of intelligence by Fusion GPS, a private company including former British intelligence operative Christopher Steele, on connections between Trump, his top advisors, and Russian officials and Kremlin-linked actors. The dossier, which circulated publicly from December 2016, set out a series of possible political and financial connections and raised the possibility that Trump had been further compromised by sexual adventures during visits to Russia.

The story is far from new: the Democratic connection was reported in October 2016, even as the material was being gathered. The pro-Trump outlets also are failing to report that the dossier was initially commissioned by Republican opponents of Trump. Perhaps most importantly, Fox TV and activists are failing to establish that the funding corrupted the intelligence — indeed, much of the dossier has been supported by subsequent revelations and the development of the FBI investigation into Trump-Russia links.

But Trump did not let any of this get in the way of Wednesday’s attempt to tar Clinton:

Hillary Clinton always denied [the link with Fusion GPS]. The Democrats always denied it, and now only because it is going to come out in a court case, they said yes, they did it, they admitted it, and they are embarrassed by it. I think it is a disgrace, it just really, it is a very sad commentary on politics in this country.

He said that the “Uranium One” episode is “Watergate, modern age”, without explaining why there was any improper activity which might involve Hillary Clinton or the Clinton Foundation.