Iran Daily: Supreme Leader — “Our Defensive Power is Not Negotiable”, at Home or Abroad 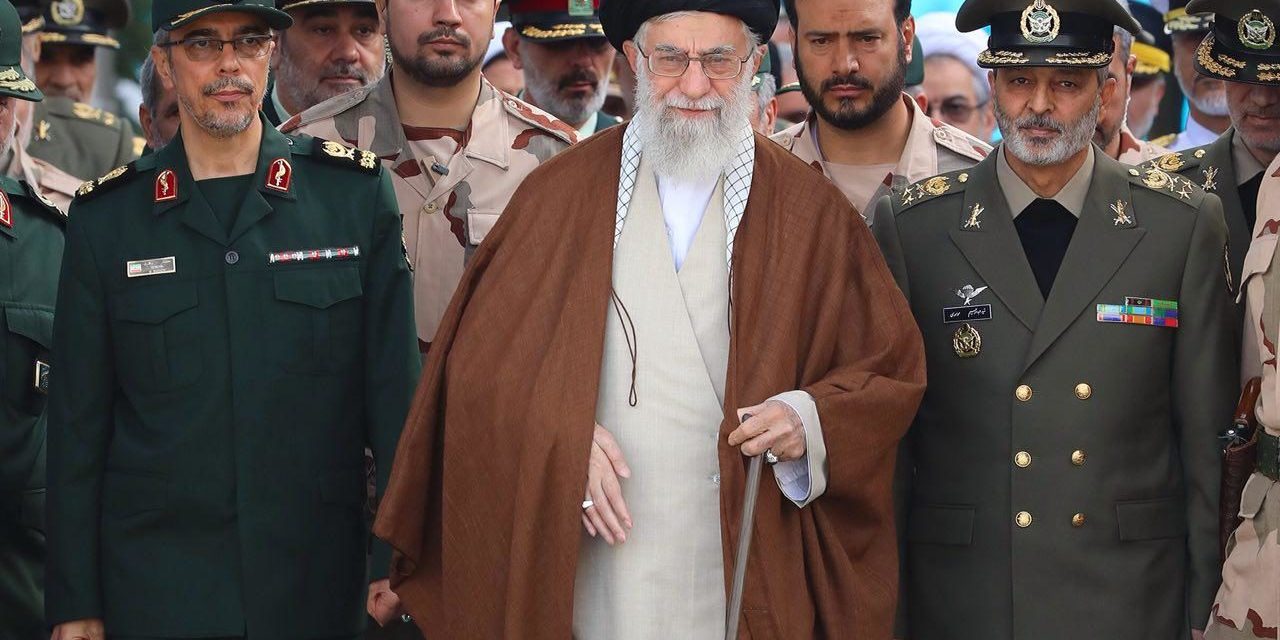 UPDATE 0730 GMT: The Supreme Leader has received Iraqi Prime Minister Haider al-Abadi, amid maneuvers over the conflict between Iraq and Iraqi Kurdistan and Monday’s meeting between Abadi, Saudi leaders, and US Secretary of State Rex Tillerson.

Mr. @HaiderAlAbadi the Iraqi PM and his entourage met with Ayatollah Khamenei. pic.twitter.com/7XLoqXFCZ8

ORIGINAL ENTRY: Iran’s Supreme Leader has made his latest response to US pressure, declaring that Iran’s “defensive power and capabilities are not subject to negotiations and haggling”.

Speaking at a graduation ceremony for army cadets, Ayatollah Khamenei also proclaimed that Iran will not withdraw its forces from interventions in the region, such as the Syrian conflict and the contest for power in Iraq, now beyond the fight against the Islamic State.

Our dear #Iran was once submissive to American, Zionist, and English advocates. The Islamic Republic glorified and dignified Iran.

As his top aide was in Damascus for talks with the Assad regime and Tehran prepared for the visit of Iraqi Prime Minister Haider al-Abadi, Khamanei said:

The Islamic Republic glorified and dignified Iran. Today our fight with the arrogant powers is over their desire to dominate our region. The most pivotal element of our national sovereignty is viewed as an intrusive element by our enemies —one that needs to be fought against….

They oppose the development of the Islamic Republic of Iran’s power in our region and beyond, because it is the country’s strategic depth.

High-level Iranian officials, including President Hassan Rouhani, have been united in their support of Iran’s armed forces by the Trump Administration’s statements and warnings of action against Tehran. They have reiterated that ballistic missile testing cannot be restricted, and have responded to Trump’s announcement of sanctions on the Islamic Revolutionary Guards Corps’ with Foreign Minister Mohammad Javad Zarif’s invocation, “We are all IRGC”.

Meanwhile, Iran is expanding its political and economic stake in Syria while worrying that Russia — another essential ally of the Assad regime — is accepting a de facto partition of the country in which both the opposition and Kurdish groups would have autonomy in some areas.

In Iraq, Iran’s position has been bolstered by the role of Shia militias, supported by Tehran and its military commanders, in the removal of ISIS from cities such as Mosul. However, that has led to further complications, such as the clash between the Iraqi Government and Iraqi Kurdistan over areas such as the city of Kirkuk and nearby oilfields.

Supporting Baghdad, Iran sent General Qassem Soleimani, the commander of the elite Quds Force, to Iraqi Kurdistan to warn its officials to pull back from Kirkuk. While that subsequently happened, easing the path of Baghdad’s forces into the city, tension remains high.

Tehran is also responding to the attempt of the US to influence Abadi, with Secretary of State Rex Tillerson meeting the Iraqi Prime Minister and top Saudi officials in Riyadh on Monday. During the visit, Tillerson pursuing the campaign of American pressure by demanding that “Iranian militias” withdraw from Iraq.

Khamenei did betray concern during his show of strength, effectively conceding that Iran’s economic recovery is still problems amid US sanctions and the caution of foreign countries and companies to commit to trade and investment.

Without referring to Washington’s restriction, the Supreme Leader said:

Our historical problem is the dependence of the economy on oil; this has caused a concern for economic security at all times: The price of oil declined, it rose, that oil customer did not pay… when everything revolves around oil, the economy is insecure; the economy must be secured.

Since the implementation of the nuclear agreement in January 2016, Iran has expanded oil exports by about 40% and there has been restoration of some foreign links, for example, with French automobile manufacturers. However, large investment projects, notably in energy, are still being hindered by fears of Washington’s punishment and by issues with Iran’s banking and financial sectors.