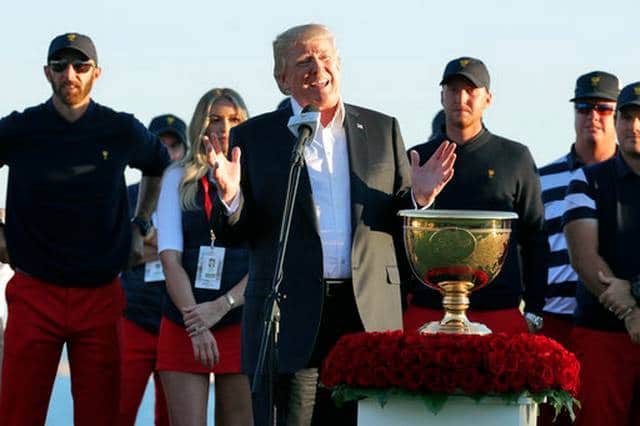 Developments on Day 255 of the Trump Administration:

Spending the weekend at his New Jersey golf club, Trump used Twitter for his intervention on Sunday morning:

…Save your energy Rex, we'll do what has to be done!

Tillerson said on Saturday, at a news conference in Chinese capital Beijing:

He continued, “We’ve made it clear that we hope to resolve this through talks,” he said, emphasizing that the objective “is a peaceful resolution”: “I think the most immediate action that we need is to calm things down. They’re a little overheated right now, and I think we need to calm them down first.”

The meetings in Beijing indicated a concerted effort between the US State Department and China, North Korea’s economic lifeline, to move the confrontation into diplomatic channels after months of rhetorical threats between Trump and Pyongyang.

But Trump indicated that he had no time for the effort. He followed up on Sunday afternoon with another Twitter blast, filled with an insult of North Korean leader Kim Jong-un and a rewriting of history:

Being nice to Rocket Man hasn't worked in 25 years, why would it work now? Clinton failed, Bush failed, and Obama failed. I won't fail.

Kim Jong-un was 8 years old when Bill Clinton took office in 1993, 21 months before a Framework Agreement that offered the prospect of a long-term resolution over North Korea’s nuclear program.

It’s almost funny if you imagine him yelling at an 8 year old. pic.twitter.com/XirN1479d1

The State Department responded indirectly to Trump with the message, through spokeswoman Heather Nauert, that “diplomatic channels are open for Kim Jong-un for now. They won’t be open forever.”

However, Nauert added to confusion with the assertion that North Korea “will not obtain a nuclear capability”.

Pyongyang established that capability in 2006.