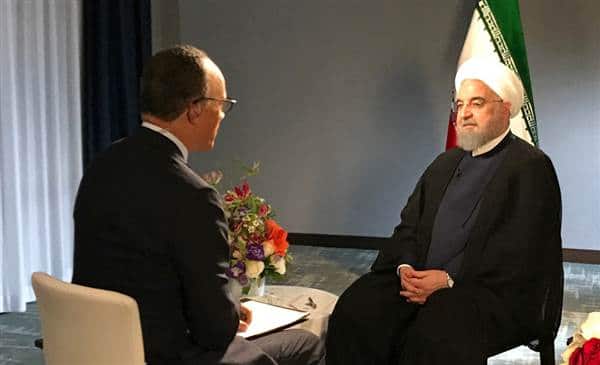 Trump's ignorant hate speech belongs in medieval times-not the 21st Century UN -unworthy of a reply. Fake empathy for Iranians fools no one.

In a speech written by hard-right advisor Stephen Miller rather than his foreign policy specialists, Trump labeled Tehran “a corrupt dictatorship behind the false guise of a democracy” and called it an “economically depleted rogue state” and “murderous regimep

Countering his own verification of Iranian compliance with the nuclear agreement, Trump said it was one of the worst and most one-sided transactions the United States has ever entered into and “an embarrassment” to Americans. Without taking a position on withdrawal, he intoned, “I don’t think you’ve heard the last of it. Believe me.”

Trump even verged on a call for the toppling of the Islamic Republic: “Oppressive regimes cannot endure forever.”

Ahead of his own address to the UN, President Hassan Rouhani maintained his line of support for the agreement while cautioning Washington against any withdrawal. He told a US TV outlet:

Every word was analyzed many times by countries involved before its ratification, so if the United States were to not adhere to the commitments and trample upon this agreement, this will mean that it will carry with it the lack of subsequent trust from countries towards the United States because the greatest capital that any country has is trust and credibility.

Rouhani told a meeting of American foreign policy specialists that US violations of the agreement — a description covering the expansion of American sanctions as well as any departure — “will amount to inviting the world to chaos, muscle-flexing and [use of] military power”.

I have said many times that the agreement is working fine. The IAEA [International Atomic Energy Agency) confirmed several times that Iran is fulfilling its obligations….

This deal belongs to the international community.

The Rouhani Government’s strategy, while promising a “proportionate response” to any US measures, is to try and separate European countries — including Britain, France, and Germany, all of whom are involved in the nuclear deal — from Washington.