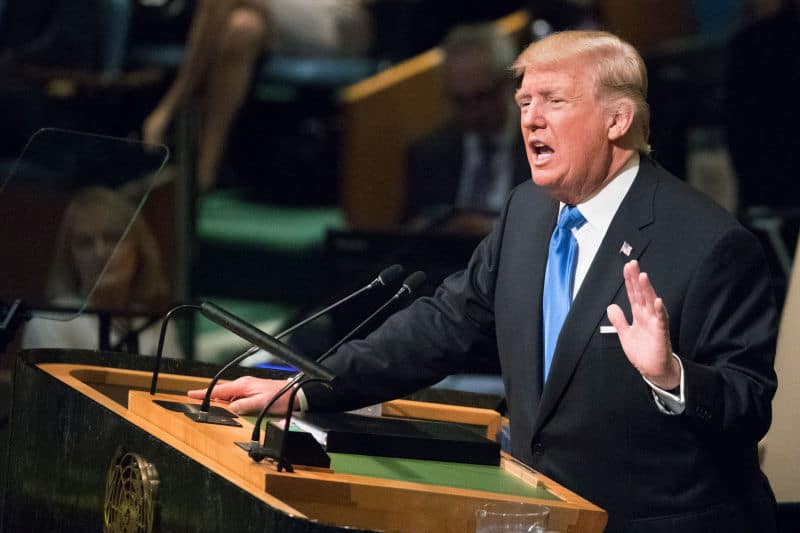 Trump: “While America will pursue cooperation and commerce with other nations, we are renewing our commitment to the first duty of every government, the duty of our citizens”

Developments on Day 243 of the Trump Administration:

In his first address to the UN General Assembly, Donald Trump pits “America First” vs. “rogue” states, threatening war with North Korea and withdrawal from the nuclear agreement with Iran.

Trump’s initial day at the UN on Monday — with a relatively muted, less aggresive approach — had raised some hopes of an address featuring co-operation rather than an escalation of tensions. But yesterday he pushed that aside, instead proclaiming that parts of the world are “going to hell”, derisively referring to North Korean leader Kim Jong-un as “Rocket Man”, targeting the “corrupt dictatorship” of Iran, and sneering at “loser terrorists”.

The key to the contrast is that Tuesday’s speech was not written by Trump’s foreign policy specialists but largely by hard-right advisor Stephen Miller, also a driving force behind Trump’s “America First” protectionism, the “Muslim Ban” barring entry to the US by citizens of six mainly-Muslim countries, and the attempt to scrap the “Dreamers” program, putting about 800,000 undocumented young immigrants at risk of deportation.

Both Trump’s self-promotion and Miller’s hand were evident from the opening lines of the muddled but strident speech, with Trump hailing that “the United States has done very well since Election Day”, He set up the tension — even contradiction — between references to the US role in co-operation since World War II, such as the Marshall Plan for European recovery, with Miller’s unilateralism of “America First”:

The speech also revived the spirit of George W. Bush’s 2002 “Axis of Evil” address, just over a year before the ill-fated war with Iraq, with its labelling of “rogue regimes” and focus on North Korea and Iran.

Trump made no reference to diplomacy in trying to check the missile and nuclear tests of the “depraved regime” of North Korea, also citing “the starvation deaths of millions” of its people and human rights abuses. Instead he warned:

The United States has great strength and patience, but if it is forced to defend itself or its allies, we will have no choice but to totally destroy North Korea. Rocket Man is on a suicide mission for himself and for his regime.

Trump then turned his invective on Iran, “an economically depleted rogue state” supporting “Hezbollah and other terrorists that kill innocent Muslims and attack their peaceful Arab and Israeli neighbors”. Despite his recent verification of Iranian compliance with the July 2015 nuclear deal with the 5+1 Powers (US, UK, France, Germany, China, and Russia), he came close to throwing out the agreement:

The Iran deal was one of the worst and most one-sided transactions the United States has ever entered into. Frankly, that deal is an embarrassment to the United States, and I don’t think you’ve heard the last of it. Believe me.

Trump then toured the rest of the world. Significantly, he covered it with the phrase “radical islamic terrorism”: a label cherished by hard-right activists like Miller, who have sought the removal of National Security Advisor H.R. McMaster for refusing to use the term. He promised to “crush the loser terrorists”, citing the weakening position of the Islamic State in Iraq and in Syria. He lashed out at “the criminal regime of Bashar al-Assad” — even though the US is pursuing a military and diplomatic line, alongside Russia, which is effectively ensuring Assad’s stay in power for the foreseeable future.

In a return to some of Miller’s favorite topics, Trump effectively shut the door on immigrants and refugees even as he proclaimed, “The United States is a compassionate nation and has spent billions and billions of dollars.” He justified a ban on refugees from countries like Syria with the claim that they could be far more cheaply accommodated in neighboring countries, and then announced:

We have learned that over the long term, uncontrolled migration is deeply unfair to both the sending and the receiving countries.

Others who felt the back of the Trump-Miller rhetorical hand were Venezuelan President Nicolas Maduro, accused of suppressing his people and democracy and the “corrupt regime” of Cuba. As expected, Trump insisted on “UN reform” — largely on the grounds, also used with NATO, that the US is paying too much to the organization — but was not as harsh over the topic as some feared.

One nation that was never mentioned — unless you count its implicit inclusion in “threats to sovereignty from the Ukraine to the South China Sea” or a thank-you for the unanimous UN sanctions on North Korea — was Russia.

An “American First” Breakaway from the International Community

Given the headline calls for showdowns with North Korea and Iran, the conclusion of Trump’s speech is likely to be overcomed. However, it may stand as the testament to his and Miller’s contradictory approach of declaring the need to deal with international conflicts while breaking away from the international community in the name of national “sovereignty”:

While America will pursue cooperation and commerce with other nations, we are renewing our commitment to the first duty of every government, the duty of our citizens. This bond is the source of America’s strength and that of every responsible nation represented here today. If this organization is to have any hope of successfully confronting the challenges before us, it will depend, as President Truman said some 70 years ago, on the independent strength of its members.

If we are to embrace the opportunities of the future and overcome the present dangers together, there can be no substitute for strong, sovereign, and independent nations, nations that are rooted in the histories and invested in their destiny, nations that seek allies to befriend, not enemies to conquer, and most important of all, nations that are home to men and women who are willing to sacrifice for their countries, their fellow citizens, and for all that is best in the human spirit.

In remembering the great victory that led to this body’s founding, we must never forget that those heroes who fought against evil, also fought for the nations that they love. Patriotism led the Poles to die to save Poland, the French to fight for a free France, and the Brits to stand strong for Britain. Today, if we do not invest ourselves, our hearts, our minds, and our nations, if we will not build strong families, safe communities, and healthy societies for ourselves, no one can do it for us.

Some diplomats could not hide their concern during the speech. There were only smatterings of polite applause during the address, while many in the audience were captured stony-faced or looking down at their papers or in at least one case, at a tablet.

The exception to the rule was Israeli Prime Minister Benjamin Netanyahu, who was visibly pleased at Trump’s denunciation of Iran and who later tweeted:

In over 30 years in my experience with the UN, I never heard a bolder or more courageous speech.

But the most telling reaction may have been that of White House Chief of Staff John Kelly, caputred in a series of photographs looking far from enthused at the presentation of America’s policy: 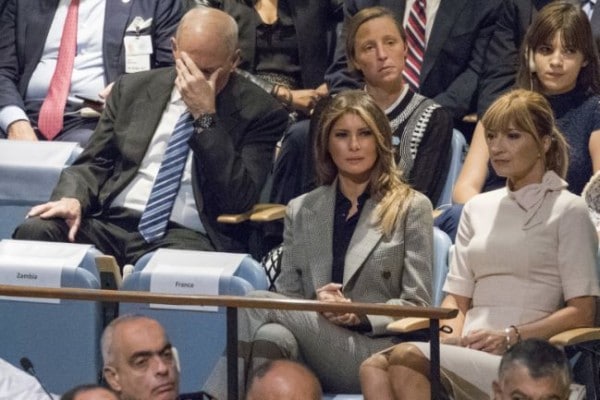