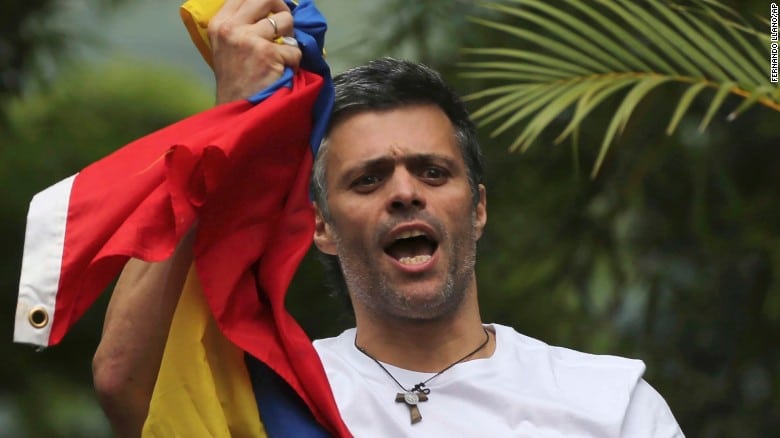 Venezuela’s El Universal: “Trump Blames Maduro for the Health and Safety of Lopez and Ledezma”

US President Donald Trump blamed Venezuelan President Nicolás Maduro on Monday for “health and safety” of opponents Leopoldo López and Antonio Ledezma, whom he called “political prisoners held illegally by the regime”.

“The United States condemns the actions of the Maduro dictatorship. López and Ledezma are political prisoners illegally detained by the regime,” Trump said, referring personally to Venezuela for the first time as “a dictatorship”.

“The United States holds responsible Maduro — who announced hours before he would act against his opposition — for the health of Lopez, Ledezma and any other detainee. We reiterate our call for the immediate and unconditional release of all political prisoners,” Trump added.

López and Ledezma, who had been under house arrest for some weeks, were detained last night for planning “an escape plan” according to the Supreme Court of Justice.

López spent more than three years in the military prison of Ramo Verde, outside Caracas, after being sentenced to nearly 14 years for violence unleashed after an anti-government march in 2014.

Ledezma, for his part, was arrested in February of 2015 accused of conspiracy and association to commit a crime, and after two months in Ramo Verde he went under house arrest for health reasons.

The condemnation for these arrests comes after Washington on Monday sanctioned Maduro, described as a “dictator” for the first time, with the freezing of assets that may have under US jurisdiction and the prohibition of financial transactions.

The decision came in response to Sunday’s election to elect representatives of the National Constituent Assembly, which Washington called a “farce”.

Despite defining it as a “dictator”, the United States still considers the government of Nicolás Maduro legitimate and would not consider recognizing a possible parallel executive formed by the opposition, said the head of the South America desk in the State Department, Michael Fitzpatrick.

The detention of Antonio Ledezma, reported in a tweet by his daughter:

CNN: “US, Others Condemn Venezuela’s Detention of Opposition Figures”

The international community condemned the detention of two political opponents of Venezuelan President Nicolas Maduro on Tuesday, with the White House saying it holds Maduro personally responsible for their safety.

“The United States condemns the actions of the Maduro dictatorship” in taking Leopoldo Lopez and Antonio Ledezma from their homes, US President Donald Trump said in a statement. “The United States holds Maduro…personally responsible for the health and safety of Mr. Lopez, Mr. Ledezma, and any others seized.”

Both men had been under house arrest for prior convictions. The house arrests were revoked, the Venezuelan Supreme Court said, because intelligence officials claimed they were planning to flee in the aftermath of Sunday’s controversial elections.

The head of the Organization of American States also blasted Maduro’s recent actions, saying he was trying to “silence and subdue an entire people.”

“For the corrupt, the murderers and the torturers, the international community must reply with the greatest severity,” he said in a news release.

The detentions come after Venezuelans elected members of a new legislative body in a Sunday vote called for by Maduro and boycotted by the opposition. Virtually all of the new body’s members are supporters of the leftist leader.
Critics in Venezuela and outside the restive nation have called the vote a sham.

Some nations have slapped new sanctions on Venezuela or some of its citizens.

The new body — called the Constituent Assembly — will have the power to rewrite the Venezuelan Constitution, which Maduro desires, and is expected to replace the previous legislative body, where the opposition has a majority. The new body will establish a “truth commission” to prosecute political opponents, one of Maduro’s top officials said.

Critics say they fear the moves will erase any last traces of democracy in the country. The election came after months of sometimes deadly anti-regime protests and an economic crisis that led many to leave Venezuela in search of easier access to food and medicine.

Families of the two held opposition leaders distributed separate videos purportedly showing armed men removing the politicians from their homes in the night.

Video posted online by Lopez’s family shows him being driven away in a car with markings of Venezuela’s intelligence service SEBIN.

A different kind of video was posted to the Twitter account of Lopez’s wife, one that appears to be a prescient statement about what would happen to him.

In the 6 1/2-minute video reportedly recorded July 17, Lopez sits by his wife and says those who detained him in 2014 could potentially send him back to prison.

“If you are watching this video, then this is precisely what happened, because they came and they unjustly took me as prisoner,” he says.

Lopez urges his supporters to continue to work for political change.

“It is worth fighting for Venezuela. Let us not falter in our fight. Let us not give up,” he says, adding that he has more motivation because his wife is pregnant.

In another video, a man apparently pulls Ledezma, a former Caracas mayor, out a door.

“He was in pajamas,” Ledezma’s daughter, Oriette, said in a video statement. “They have kidnapped him once again. We hold the regime responsible for his life and physical integrity.”

The Supreme Court said that Lopez and Ledezma had been prohibited from carrying out political actions during their house arrests and that the latter had been forbidden from making declarations to any media.

Both had made public statements in recent days against Sunday’s vote.

Lopez, a former mayor of a Caracas district, was put under house arrest last month, having served the previous couple of years in prison.

Long a vocal opponent of the socialists in power, Lopez was detained in 2014 after at least three people were killed during an anti-government protest in the capital — violence that authorities blamed on him. His detention was a rallying cry for anti-regime demonstrators.

Lopez was sentenced in 2015 to nearly 14 years in prison, but he was released to house arrest in July.

In a 15-minute video posted online last week, Lopez urged Venezuelans to keep up anti-regime protests. He called Maduro and his supporters a “very clear threat,” saying their goal is to undermine democracy and achieve the “absolute submission of the Venezuelan people”.

He was rounded up early Tuesday, his wife, Lilian Tintori, said on social media. Tintori posted video that she says shows her husband being taken away.

“They just took Leopoldo from the house….Maduro is responsible if something happens to him,” Tintori tweeted.

Lopez, a descendent of South American liberator Simon Bólívar and Venezuela’s first president, Cristóbal Mendoza, was banned in 2008 from running for office on accusations of corruption. An international human rights court cleared him in 2011, but the Supreme Court upheld the ban.

Ledezma, known throughout Venezuela for his vocal opposition, was elected Caracas mayor in 2008. He was arrested in February 2015 after Maduro accused him of involvement in a plot to overthrow the government.

“We know that our public institutions have become instruments of a totalitarian regime, of a tyranny, which decided to continue damaging and destroying our rights,” Ledezma said.

His wife, Mitzy Capriles, said her husband was taken to the Ramo Verde Prison. Speaking Tuesday from Madrid, Spain, Capriles said she is “deeply anguished” by her husband’s detention and said his attorneys won’t be able to speak to him until later Tuesday night.

CNN is unable to confirm the location of either opposition figure.

“The End of Freedom of Expression”

“This is the end of freedom of expression, and this freedom has been battered for some time now,” Attorney General Luisa Ortega said.

For months, Venezuela has struggled with two interconnected crises: a collapsing economy and a standoff between Maduro and the opposition.

In December 2015, opposition politicians won a majority of seats in the National Assembly. It seemed like a potential turning point — the assembly could vote to impeach Maduro, who had verbally clashed with the opposition since he came to power in 2013.

But before lawmakers were sworn into office, Maduro stacked the Supreme Court with his supporters to block any impeachment attempts.

The Supreme Court briefly attempted to dissolve the National Assembly in March, sparking a wave of nearly daily protests. More than 120 people have been killed in the ongoing unrest.

Luis E. Rondón, one of five directors of Venezuela’s National Electoral Council, voiced reservations at a news conference about the validity of Sunday’s vote.

Normal electoral controls had been relaxed and in some cases eliminated in Sunday’s poll, he said. Rondón is the sole director of the electoral council who isn’t a supporter of Maduro.

The US Treasury Department slapped sanctions on Maduro following the vote, calling the election illegitimate and saying that Maduro was disregarding the will of his people. All of the President’s assets subject to US jurisdiction were to be frozen. All US citizens are barred from dealing with him, according to the department.

In a nonbinding referendum organized by the opposition in mid-July, an overwhelming majority of voters rejected the planned constituent assembly. About 7 million Venezuelans voted in that referendum — 37% of the electorate.

Venezuela’s national election committee said more than 8 million people cast votes Sunday. The opposition disputes that, and says the number that voted in the July 16 referendum was higher.