Trying to Limit Immigration, Trump Administration Steps Away from Statue of Liberty 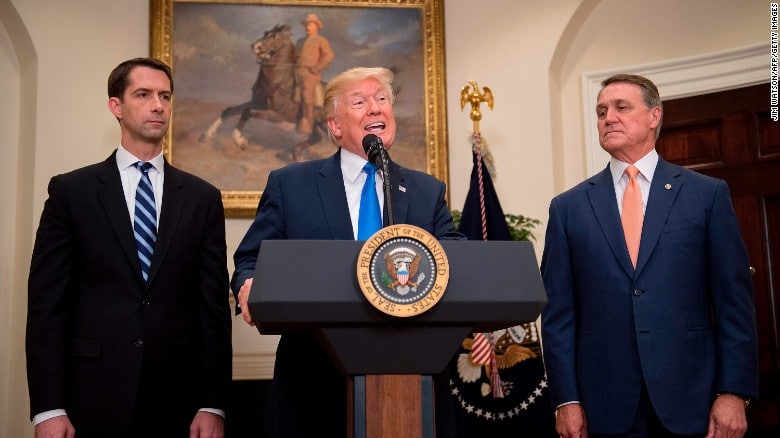 The Trump Administration has supported a proposal to halve legal immigration, deriding journalists who raised the values embodied by the Statue of Liberty.

Donald Trump — in contrast to his low-key signing of a Russian sanctions bill that he opposes — had staged a high-profile endorsement of legislation that would sharply curb the ability of US citizens and legal residents to bring family members into the country.

The plan launches a merit-based system for admission to the US and granting of green cards for legal residency, favoring applicants based on skills, education and language ability rather than relations with those already in the country. Broader immigration legislation, supported by President George W. Bush, included the provision but failed to advance in 2007.

More than one million people are granted legal residency each year. According to projections by sponsoring Republican Senators Tom Cotton and David Perdue, the proposal will reduce the total by 41% in its first year and 50% by its 10th year, although the number of immigrants granted legal residency on the basis of job skills — about 140,000 — will be roughly the same.

“This legislation will not only restore our competitive edge in the 21st century, but it will restore the sacred bonds of trust between America and its citizens,” Trump said alongside Cotton and Perdue. “This legislation demonstrates our compassion for struggling American families who deserve an immigration system that puts their needs first and that puts America first.”

In 2014, 64% of immigrants admitted with legal residency were immediate relatives of US citizens or sponsored by family members, while 15% entered through employment-based preference.

The Cotton-Perdue legislation will still allow spouses and minor children of Americans and legal residents to come in, but will eliminate preferences for other relatives such as siblings and adult children. It creates a renewable temporary visa for older-adult parents who enter as carers.

The legislation also limits the number of refugees offered permanent residency to 50,000 a year and eliminates a diversity visa lottery.

“The Poem Was Added Later”

When CNN’s Jim Acosta read him some of the words inscribed on the Statue of Liberty — “Give me your tired, your poor, your huddled masses yearning to breathe free” — Miller responded:

The poem that you’re referring to was added later. It’s not actually part of the original Statue of Liberty.

As the Ellis Island Museum informs, immigrants to the US in the late 19C/early 20C were not supposed to have jobs in advance of immigration.

Echoing arguments made by Cotton and Perdue that low-skilled immigrants push down wages and keep the US from being competitive, Miller asked, “At the end of the day, why do special interests want to bring in more low-skill workers?”

However, most economists assess that legal immigration has bolstered the American workforce and economy. The National Immigration Forum, an advocacy group, notes that the US is facing a gap of 7.5 million jobs by 2020.

Trump has falsely claimed that that immigrants cost taxpayers “many billions of dollars a year”.