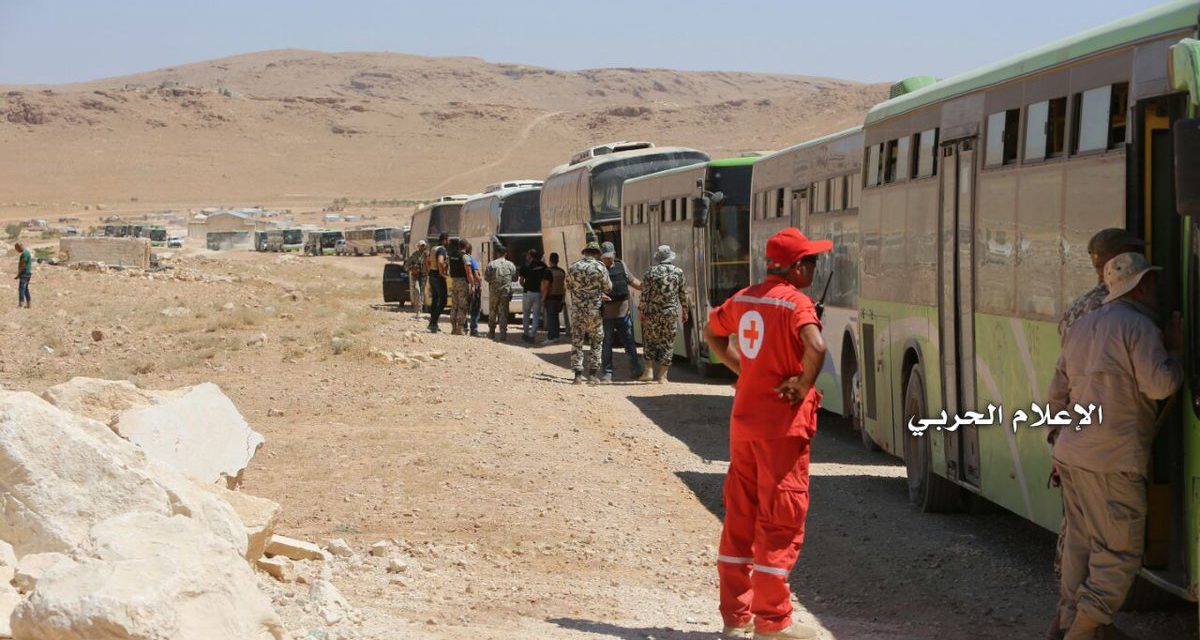 About 2,500 Syrian anti-Assad fighters, their families, and displaced civilians were removed from the mountains of northern Lebanon on Monday, in the final stage of an agreement signed with Hezbollah last month.

The departees included 2,000 civilians and fighters of the rebel faction Saraya Ahl al-Sham, who are moving to the opposition-held area of the east Qalamoun Mountains in Damascus Province.

Most of the fighters of Saraya Ahl al-Sham are from the eastern Qalamoun.

Thousands of Syrian refugees and fighters from the jihadist bloc Hay’at Tahrir al-Sham had already been moved from the Arsal region to Idlib Province in northwest Syria.

Within hours of the departure of the last convoy of 40 buses, the Lebanese army deployed across Jeroud Arsal. The army said that it will now be “encircling and tightening the noose around the Islamic State terrorist group in Jeroud Ras Baalbeck and Qaa”, north of Arsal.

Hezbollah attacked throughout Arsal, following Lebanese army raids on refugee camps at the end of June, in an effort to push out the anti-Assad groups who have been present since 2013.

At least 40,000 registered refugees are in the Arsal camps, according to the UN, but the total is believed to be far higher. An estimated 8,000 have chosen to leave following the raids and fighting.

The head of the Assad regime’s armed forces, Gen. Ali Ayyoub, has visited troops after they completed the takeover of Sukhna, the last town held by the Islamic State in eastern Hama Province.

Pro-Assad forces, enabled by Russian aerial operations, are now hoping to push into Deir ez-Zor Province in eastern Syria. ISIS has held much of the province since 2014, cutting out regime units in areas including Deir ez-Zor city.

The UN says almost 50,000 people, most of them women and children, are still stranded in southern Syria, near the border with Jordan.

Displaced Syrians began gathering in the Rukban area at the end of 2015, and Jordan closed its border to any more refugees from June 2016 after Islamic State attacks on security forces, including the killing of seven border guards. Since then, they have faced shortages of food, water, and healthcare and periodic airstrikes by pro-Assad forces.

At one point, an estimated 75,000 were in makeshift camps in the desert area known as “The Berm”.

UN agencies agreed late last year to an aid system that, according to critics, handed much of the control to Jordan’s military and a Jordanian contractor and involved armed men on the Syrian side.

“The UN calls on all parties to the conflict to take the necessary steps to prevent further harm to the frightened and highly vulnerable individuals stranded at the border,” Haq said.