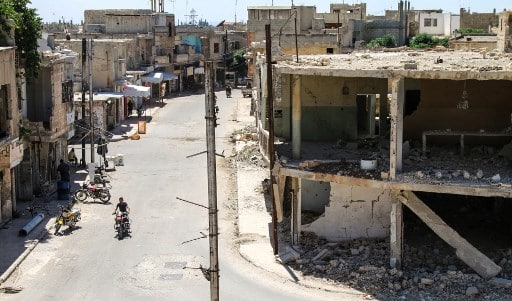 Syria’s rebels and the Assad regime have agreed a de-escalation zone in northern Homs Province, in an arrangement brokered by Russia.

A truce took effect at noon on Thursday. in the area north of Homs city.

According to a copy of the agreement posted online, rebels can retain their weapons and remain in the province. Detainees on both sides will be released, and an initial aid convoy with food and medicine will enter the area on Monday.

Russian military police will man checkpoints at three locations on the edge of the zone, with up to 40 personnel — including two commanders — as well as a representative of the rebels and the regime’s military at each point. The Russians will have the power to inspect goods and to oversee the entry and exit of civilians from Homs and Hama Province.

The Homs-Hama highway, a section of which runs through the heart of the opposition area, will reportedly be reopened.

The deal also has provisions for fighters of the Hayat Tahrir al-Sham bloc and the Islamic State, both of whom are excluded from any truces brokered by Russia. HTS personnel will have their safety guaranteed until September 10 but must then have departed. They will be subject to attack after that point, but coordinates for any operation must be supplied to ensure civilian safety.

One resident estimated that about 1,000 HTS fighters are still in the area, primarily in the eastern periphery.

“We Just Want A Way Out”

Samer Sleiman, an activist from the Houleh area, said residents are “pleased” with the agreement: “The siege has exhausted them in every way.”

The opposition has controlled the northern Homs pocket since 2012. Previous ceasefires have not held amid regime bombardment and siege. As recently as Monday, airstrikes were carried out on two towns.

“Everything depends on Russia,” said Abu Khaled, a resident of al-Dar al-Kabirah. “If Russia wants the regime to abide by the agreement, then it will.”

He added, “We’re so tired of the siege, the hunger, the bombing. We just want a way out.”