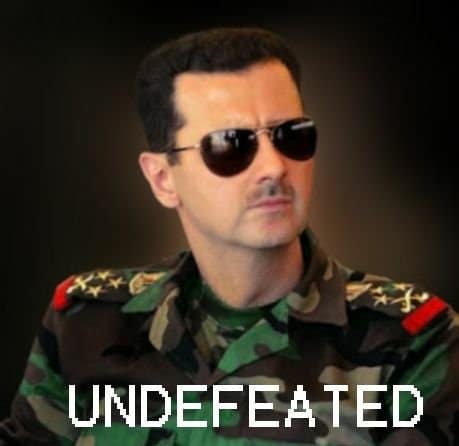 Chants from Charlottesville white supremacy rally: “Assad did nothing wrong”

A curious but notable link to Syria has come out of the white supremacist rallies in Charlottesville, Virginia, in which one person was killed and at least 34 wounded over the weekend: an admiration among some of the marchers for Bashar al-Assad.

James Fields — detained after a car rammed counter-protesters, killing a 32-year-old woman and injuring 19 people, featured Assad on his Facebook page. Other marchers shouted, “Assad did nothing wrong”, and wore T-shirts celebrating the regime barrel bombs that have killed thousands of Syrians:

Among the leading promoters of Assad is David Duke, the former Grand Wizard of the KKK who was a vocal presence in Charlottesville. Last October — weeks after he went to Syria and proclaimed, “Learn the truth” — he posted a tweet with a lurid image to set up Assad as a defender against menacing extremists:

Is Assad really a "bad guy" or does he do bad things to defeat the lunatics our taxes fund?https://t.co/5TP7kJdpRH#Wikileaks #Debate #MAGA pic.twitter.com/zkLzRhgDi8

Duke followed this spring with proclamations such as “President Assad solves problems” and “Civilized world stands with Assad“.

Other activists allied themselves over the weekend with the pro-Assad sentiment. Julian Assange of WikiLeaks — a possible collaborator in Russian propaganda over Syria and Moscow’s interference in the 2016 US election — converted an image of the white supremacists in Charlottesville into a jab at the Syrian opposition and rebels:

We finally found those 'moderate rebels' everyone was looking for. pic.twitter.com/Rg0ZytzV8B

Maram Susli, a vocal pro-Assad activist labelling herself as “Partisan Girl”, also tried to tar “anti-fascists” with responsibility both for Charlottesville and for the Syrian conflict. “The antifa who are also responsible for the violence in #Charlottesville and illegally joined fighting in #Syria,” she tweeted.

The ISIS-linked group Jaish Khalid has claimed responsability for a suicide attack on Friday that killed at least 23 fighters of the rebel faction Jaish al-Islam in eastern Daraa Province in southern Syria.

Jaish Khalid issued the statement on Sunday night, claiming more than 25 deaths among those at a Jaish al-Islam meeting in Naseeb. This would be their first operation outside the Yarmouk Basin in western Daraa Province where they have battled rebels for years.

Jaish al-Islam promised determination in the face of the attack, asserting on Saturday:

We say to the bats of darkness who stand behind this sinful act: your strike will not weaken our strenght, but it will increase our determination and steadfastness.