So What if Iraq’s Yezidis are “Devil Worshippers”? 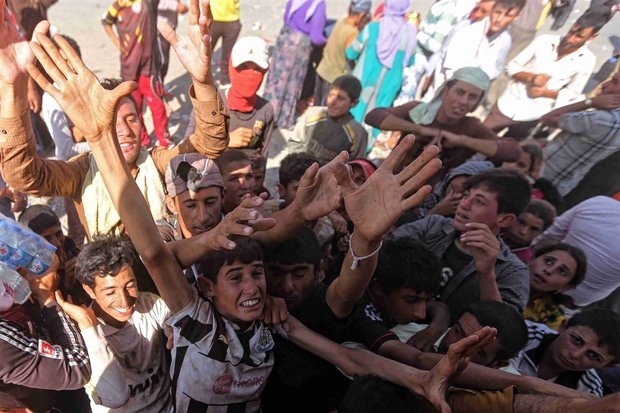 “It took us centuries to finally begin to understand who the Yezidis are.”

Balsam Awni of the University of Birmingham writes for The Globe Post:

It was August 3, 2014. Almost two months since the Islamic State captured the Iraqi city of Mosul. I was just trying to swallow what had happened during this time: the collapse of the Iraqi army, the Camp Speicher massacre, the forced displacement of Christians, and series of ongoing atrocities against whoever stands against ISIS. While I was mourning all these losses, I was anxious and terrified that Baghdad might be the next target, and could hardly begin to imagine what could happen to my family, relatives, and friends. With the internet cut off for security reasons, it only added to my misery.

I, like all ordinary Iraqis, home and abroad, was just living our worst nightmare and was not yet ready for another catastrophe. But what happened on August 3 was beyond our expectations. The tragic scene of the thousands of innocent families stranded on the Sinjar Mountain captured my mind and still does, and won’t fade away from memory. First-hand accounts that started to emerge in the following days that ISIS had committed mass killing of hundreds of Yezidi men were horrific and gut-wrenching. But news that Yezidi girls and women were being abducted and enslaved in what is known in Arabic as Sabi was the hardest thing to absorb.

With every new account by a Yezidi eye-witness and/or survivor unfolding, I was terribly shaking like a palm tree frond, a phrase used by my father as he was once trying to calm down his traumatized 9-year-old daughter unendingly trembling upon hearing the sounds of bombing sounds in the 1991 Gulf War. That child was me, and it was me now, a Ph.D. researcher and mother of two daughters, going through similar feelings.

Around August, I had started the second year of my Ph.D. journey, changing the topic from Syria to ISIS following the June 11 collapse of Mosul. I was collecting data on the Speicher massacre and I faced another tremendously emotional and challenging case to examine.

As I was trying to pull through, I started to look for the religious grounds along which the Islamic State justified Sabi. But ISIS remained silent for a period of two months, with the exception of individual tweets by its affiliated Twitter accounts. It was in mid-October that ISIS responded in a detailed article in its outlet Dabiq. Translating Sabi into slavery, ISIS was looking to re-establish slavery as an institution. Acknowledging the discontinuity in the practice, ISIS sought its revival as it proclaimed religious legitimacy as a caliphate.

Slavery was put within the framework of an apocalyptic narrative that identified it as a prerequisite for the Hour. According to ISIS, Yezidis were defined as infidel “devil worshippers” whose women should be enslaved according to the Sharia — a misrepresentation that did not start with the Islamic State, but predated it by decades if not centuries.

When I was a young kid, I often heard about the mysterious people who lived on a far mountain in the north, worshipping Satan. I didn’t know back then that they were the Yezidis. Saddam Hussein and the Baathist oppression of them was in no small part accountable not just for the misrepresentation, but for our ignorance about who truly they were.

People worshipping Satan might sound terrifying for another child with religious upbringing. However, for someone like me brought up to respect the other whoever they are, it was not. I found it fascinating and responded with a smile and a “Wow” said in secret. I wanted to know more about them but the spiral of wars crushed my desire.

Now it is time to dig into the history was Yezidis.

The task was not easy, though, for little was written by Yezidis themselves and only a few writers seemed able to do them justice. But from the few sources I collected, I began to demystify the Yezidi faith as a very old distinct monotheistic religion.

The Yezidis indigenous in the north of Iraq are Kurds who still have a distinct culture, but importantly, the Yezidi identity is first and foremost shaped by religion and not ethnicity. Their unique insular culture, beliefs, and traditions dazzled me as did their shrines, and sacred sites, sadly destroyed by ISIS.

I could understand the long history of oppression, persecution, and massacres that Yezidis witnessed throughout the centuries: from the Ottoman Empire to Saddam Hussein’s era. The 72 genocides they went through were mostly based on religious grounds and on defining the Yezidis as “devil worshippers”. This misrepresentation lingered even in the age of technology and social media as reflected in the writings of some Arab writers. Meanwhile, the continued persecution of the Yezidis might have isolated them and impeded their willingness to write and correct such misrepresentations.

This has started to change, albeit gradually and slowly, since August 3, whether through the survivors themselves or through other Yezidi activists and journalists. On social media, we started to see Yezidi pages and blogs specifically designed to re-define Yezidis, their faith and history.

It took us centuries to finally begin to understand who the Yezidis are. It required ISIS for us to know and embrace them. But it is not just the Yezidis of whom we are ignorant. We are equally so of diverse minorities such as the Shabaks, Mandaeans, and Turkmen. Being aware of their existence in Iraq is not enough. We need to be aware of how they define themselves, to accept, respect, and embrace the differences.

While it is vital to correct misconceptions and to accept the other whomever they are, an honest question needs to be asked: So what if they are devil worshippers? Would they not deserve our compassion, mourning, and outrage? Must they be subject to such a destiny at ISIS’s hands?

Until we reach a stage when we look at all individuals as human beings regardless of their faith, and regardless of other differences, beyond the confines of religions, and through the lens of humanity, new chapters of conflicts and tension will keep unfolding.