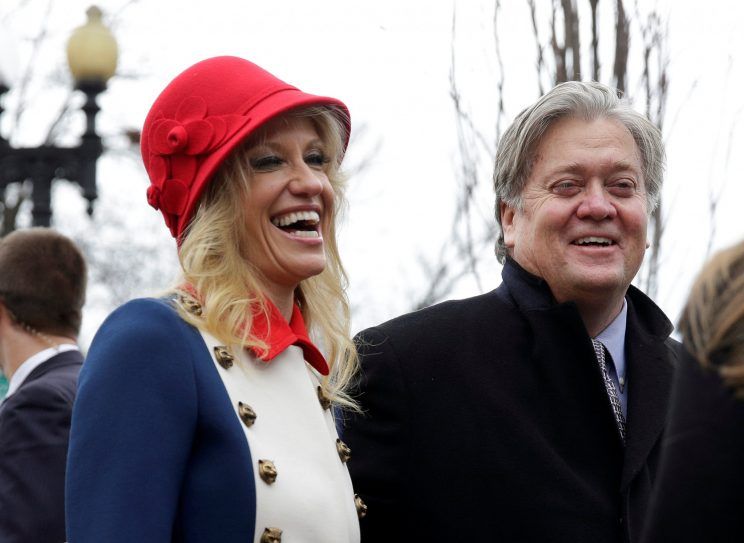 “This document was about establishing a company to conduct opposition research on behalf of the [Trump] campaign, but operating at a distance so as to avoid campaign reporting.”

Developments on Day 162 of the Trump Administration:

See also VideoCast: “Burn It Down” — From Trump’s War on Women to His War on the Media
Podcast: The Muslim Ban & Trump’s Attack on Mika Brzezinski

Smith extensively mentioned Flynn and his son Michael G. Flynn, talking about Flynn’s deep dislike of Director of National Intelligence James Clapper — blamed for Flynn’s dismissal as head of the Defense Intelligence Agency by President Obama — and his moves to position himself as CIA Director under Trump.

But Smith also referred to Bannon, Conway, Clovis, and other Trump campaign officials in a September 7 document that he sent to British cyber-security specialist Matt Tait.

The document detailed a company, KLS Research, set up in Delaware “to avoid campaign reporting”. It listed four groups involved in the initiative — the first, “Trump Campaign (in coordination to the extent permitted as an independent expenditure)”, listed the Trump advisors.

My perception then was that the inclusion of Trump campaign officials on this document was not merely a name-dropping exercise. This document was about establishing a company to conduct opposition research on behalf of the campaign, but operating at a distance so as to avoid campaign reporting. Indeed, the document says as much in black and white.

The combination of Smith’s deep knowledge of the inner workings of the campaign, this document naming him in the “Trump campaign” group, and the multiple references to needing to avoid campaign reporting suggested to me that the group was formed with the blessing of the Trump campaign.

Smith, who died in May, reached out another cyber-specialist, Vincent Tan, on Twitter later in September without mentioning any Trump connection:

@vincent_tky we have areas of mutual interest. please follow so I can send contact info via DM

Bannon told The Wall Street Journal, “Never heard of KLS Research or Peter Smith”. Conway said she knew Smith from GOP politics but had not spoken with him in years. Flynn and Clovis did not respond to requests for comments.

Some officials said state laws prohibit release of individuals’ data, while others refused to provide information because they see political intent — including potential suppression of voters, amid unsupported claims by Donald Trump and commission chair Kris Kobach of “millions” of people illegally choosing Hillary Clinton last November — in the commission’s creation and approach.

As Kansas Secretary of State, Kobach promoted the “Crosscheck” system to see whether voters had registered in multiple states, but frequently lost in court as judges warned that the measures were disqualifying too many legitimate voters.

Experts have noted few cases of fraud in recent elections and described the commission’s request as unprecedented in scope, with the prospect of voter suppression and invasion of privacy.

Trump — who had declared during his campaign that China was “raping” the US economy and who blasted Beijing just after his inauguration for supposedly doing nothing over North Korea’s nuclear and missile programs — embraced Xi after the Chinese leader visited Trump’s Florida resort in February, describing him as a “terrific person” with whom he had a “very good relationship”.

But in the past week the Administration has completed a $1.4 billion arms sale to Taiwan, labeled China as one of the world’s worst human traffickers, and imposed sanctions on a Chinese bank for doing business with Pyongyang.

While I greatly appreciate the efforts of President Xi & China to help with North Korea, it has not worked out. At least I know China tried!

Speaking alongside the South Korean President Moon Jae-In in the White House Rose Garden on Friday, Trump declared,
“The era of strategic patience with the North Korean regime has failed, many years it has failed. Frankly, that patience is over.”

In contrast to Moon’s call for engagement with Pyongyang, Trump said:

“The United States calls on other regional powers and all responsible nations to join us in implementing sanctions and demanding that the North Korean regime choose a better path and do it quickly and a different future for its long suffering people.”

The Trump Administration plans to arrest parents and other relatives whom authorities believe smuggled their children into the US,

The “surge initiative” seeks to detain the adult sponsors of unaccompanied minors who crossed the border, Immigration and Customs Enforcement officials confirmed.

Under the Obama Administration, children were placed with sponsors — typically parents, close relatives or family friends — in communities nationwide. They cared for the minors as they went to school and sought legal status in immigration court.

Wendy Young, president of Kids in Need of Defense, a nonprofit that has matched thousands of unaccompanied minors with pro bono attorneys in the last eight years, said:

Arresting those who come forward to sponsor unaccompanied children during their immigration proceedings, often parents, is unimaginably cruel. Without caregivers to come forward, many of these children will languish in costly detention centers or be placed in foster care at great expense to states.

Children whose sponsors were arrested will be placed with another verified relative or guardian or under the care of the Office of Refugee Resettlement, said ICE spokeswoman Sarah Rodriguez.

Since October 2013, almost 170,000 unaccompanied minors have been placed with sponsors in all 50 states and the US Virgin Islands, and many are still awaiting court hearings.

The last staff leave the science division of the White House’s Office of Science and Technology Policy.

The remaining three employees, holdovers from the Obama Administration, departed on Friday.

The science division had been staffed with nine employees who led on policy issues such as STEM education, biotechnology, and crisis response.

On Friday afternoon, Eleanor Celeste, the assistant director for biomedical and forensic sciences at the OSTP, wrote before leaving the office for the last time:

“All of the work that we have been doing is still being done,” a White House official said, claiming that 35 staff currently work across the OSTP.