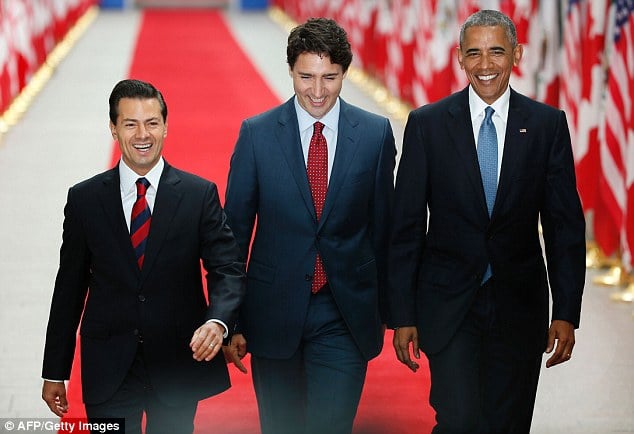 Donald Trump’s three key mistakes on NAFTA: “Not a solid basis for the US or its partners Mexico and Canada to start any (re)negotiations.”

The Office for the US Trade Representative has announced that its chief officer, Ambassador Robert Lighthizer, has notified Congress about the Trump Administration’s intent to renegotiate the North American Free Trade Agreement.

The USTR explained that, at Trump’s direction, the US will seek a “much better” agreement that reduces the trade deficit between the US and its partners, Canada and Mexico, through a “more open, equitable, secure, and reciprocal market access”. In response to the 18-page document, Mexico and Canada released brief statements welcoming the proposal as a step towards modernizing NAFTA to reflect new realities and to address the challenges of the 21st century.

See also Can US-Mexico Relationship Be Saved from Trump?

But despite these good intentions and purported goodwill, the US objectives for a revised NAFTA are unachievable. Three key points in the American negotiating position reveal the limited understanding of Trump and his advisors about NAFTA and its side agreements.

A Mistaken View of Job Losses

First, the USTR’s case for renegotiating the agreement is based on the claim that NAFTA is to blame
for various (and unspecified) “problems for many American workers”. Allegedly these problems led to the explosion of US trade deficits since 1994, when the agreement entered into force, and the closure of “thousands of factories” that left “millions of American workers stranded, no longer able to utilize the skills for which they had been trained”.

As candidate and President, Trump claimed that “disastrous trade deals”, including NAFTA, resulted in the loss of manufacturing jobs in the US. However, US manufacturing jobs were not lost to Mexico, but to two global phenomena: China’s rise as global exporter, following its entry into the World Trade Organization in 2001, and more importantly, global technological change — mainly automation — which enabled significant increases in industrial output at the expense of blue-collar jobs.

Between 1999 and 2011, the US lost between 2 million and 2.4 million jobs to China, because of increasing American demand for cheaper Chine products. Other jobs are nowhere to be found. Between 2000 and 2010, the US lost 4.8 million manufacturing jobs to machines while — contrary to Trump’s rhetoric — making the sector more productive and increasing its output. Gradually replacing human workers with robots, US factories “are producing more with fewer people”, says Mireya Solís, Senior Fellow in Foreign Policy at The Brookings Institution.

Second, the USTR and the Trump Administration are pursuing the redrafting of NAFTA into an agreement that provides the US with a “more open, equitable, secure, and reciprocal access” to the Canadian and Mexican markets but, at the same time, allows Washington to establish protectionist “job-creating” policies at home. The statement reaffirms the US Executive’s strong belief in renegotiating and delivering an agreement that “gives farmers, ranchers, and…other businesses new opportunities to grow their exports”, and “stops the bleeding” of US jobs.

Such a double-edged agreement is not just unworkable, it is incongruous. The US’ domestic market (321 million consumers) is twice as large as Canada and Mexico’s domestic markets combined (36 and 119 million, correspondingly). The now popularly-held and allegedly alarming figure of a $64 billion US trade deficit with Mexico is mainly made up of intra-industry trade concentrated in the automobile, telecommunications, and, more recently, aeronautics industries.

Intra-industry trade refers to exchanges where countries import and export similar goods from and to one another. In 2002 “the two largest US exports to Mexico, namely electrical machinery and appliances and motor vehicles, were also the most important exports from Mexico to the US”. NAFTA promotes this two-way exchange of goods, because it liberalized trade between the three countries in a wide and nearly-equal range of industrial classifications — thus opening the US market to Mexico and Canada as much as it opened the Mexican and Canadian markets to the US.

Because of its intra-industrial nature, the continued expansion in regional trade that NAFTA sustains does not lead to major dislocation of productive activities in any of these countries — because the North American countries mostly trade the same products between them. So revisiting NAFTA in the expectation of setting American tariffs to imports in certain goods and services will hurt, not help, jobs in the US.

Lip Service on the Environment

Third, the USTR says it will strengthen labour and environment obligations that are currently covered in NAFTA’s side agreements, and bring them into the main agreement. Hinting at individuals and non-governmental organizations disgruntled with NAFTA, the text states the Trump Administration’s intent to “establish a means for stakeholder participation, including through public advisory committees, as well as a process for the public to raise concerns directly with NAFTA governments if they believe a NAFTA country is not meeting its labour [or environmental] commitments”.

Most importantly, as part of the only trilateral, permanent environmental institution in North America, the JPAC promotes cooperation between national and sub-national governments, non-governmental organisations, and communities to protect the region’s environment while promoting sustainable economic development. It holds a regular annual session, open to the public, and numerous other events and programs that bring together its members, environmental ministers, and citizens to discuss and act on North America’s environmental priorities and challenges. These include preventing trade-related degradation, promoting the adoption of clean energies, and fighting climate change in North America.

But the JPAC, like rest of the CEC, are at risk of losing their US share of funding and hence seeing their capacities severely reduced. As with many other programs and initiatives, the Trump Administration is paying lip service to the well-being of the US population and environment, while cutting funding for it — just like the Obama Administration did when it temporarily closed the Office of the Secretariat of the North American Labour Commission in August 2010, but never reopened it.

As with many other Trump campaign promises and government policies, the means, aims, and consequences of the intended renegotiation of NAFTA do not appear to have been as carefully considered, let alone planned. Instead, the USTR’s text indicates that Donald Trump and Ambassador Lighthizer have a very limited and weak understanding of how NAFTA and its side agreements work.

And that is a not a solid basis for the US or its partners to start any (re)negotiations.