Cheering Assad: How the US Left Joined the Far Right 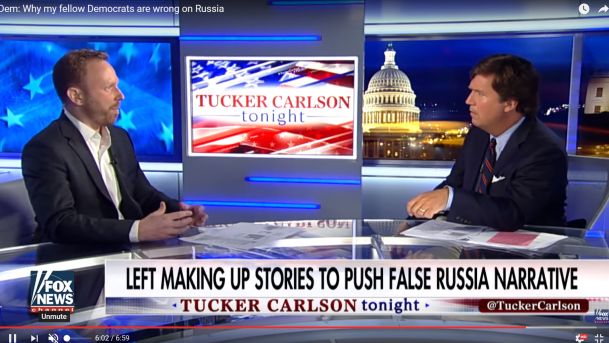 Prominent left wing blogger and self-declared “anti-imperialist” Max Blumenthal was recently the special guest of Fox News’ Tucker Carlson. Blumenthal took to the airwaves of a hard-right, Islamophobic propaganda network to rail against sanctions and dismiss irrefutable accusations of collusion between Donald Trump’s election campaign and the Kremlin.

Normally a situation in which the far-left find kinship with the far-right would raise more of an eyebrow, but in the world of Trump-Russia it barely registers anymore. This is because these voices have found ideological bedfellows on the Western far-right.

Blumenthal’s appearance on Fox wasn’t an anomaly, for the editor of the “Grayzone Project”, supposedly dedicated to “combatting Islamophobia”, has long been at the forefront of a group of Western bloggers, pundits and academics promoting pro-Kremlin propaganda and regurgitating widely debunked Islamophobic conspiracy theories about Syrians.
Blumenthal, along with his colleagues and frequent Russia Today contributors Gareth Porter, Benjamin Norton, and Rania Khalek have spent the best part of the last 18 months publishing smear attacks against NGOs, medics, journalists, first responders and Syrian civil society groups.

See also Smearing Syria’s White Helmets — From the Assadists to the Conspiracy Theorists
Syria Feature: These Are The White Helmets

Virtually any group that speaks out on the Assad regime’s campaign of systematic slaughter have been targeted by this coterie with the express intention of defending a regime guilty of human extermination. This work is focused squarely on painting any grassroots opposition to the Assad regime as either the work of U.S. imperialism or borne from violent Sunni extremists. Blumenthal and his crew have also positioned themselves as the enemies of truth, by frequently using their platforms to deny or dismiss the war crimes of the Assad regime.

The irony is that Blumenthal used his appearance on Fox to dismiss the credibility of irrefutable Trump-Russia connections on a supposed lack of evidence, whereas in Syria, Blumenthal and his AlterNet Grayzone colleagues have repeatedly ignored evidence in favour of fact-free war crimes denial narratives, even when those narratives contradict each other.

But those who have followed Blumenthal’s evidence-free approach to Assad should not be shocked by his desire to jump into bed with the pro-Putin right-wing chorus.

Take for example the Assad regime’s air strike on the Ain al-Fijeh water springs in the Damascus enclave of Wadi Barada. When the spring was bombed, temporarily cutting off fresh water supplies for large parts of Damascus, the regime claimed that the rebels poisoned the water supply with diesel fuel. Despite there being no evidence of this, Blumenthal ran with this lie. Following a UN investigation that found the Assad regime responsible for the war crime, not only did Blumenthal fail to retract the lie, his colleague Rania Khalek rejected the UN investigation and again mouthed the regime line.

The same thing happened following the regime’s bombardment of the Aleppo aid convoy in September 2016. Again, AlterNet writers started pushing the Kremlin line and, following the United Nations conclusive report finding the regime culpable, they rejected the conclusions of the investigation in favour of Russian claims. This has been repeated time and time again by these bloggers, whether dismissing recorded attacks against field hospitals or outright denying regime culpability for chemical weapons attacks based on claims from one anonymous source. The reality is these pundits aren’t interested in the veracity of evidence when it comes to using fabricated claims to defend Russia or Assad from allegations of war crimes, even following conclusive independent United Nations investigations.

This evidence-free, propaganda heavy position on Syria has been fawned over by the far-right. Blumenthal’s work has received gushing praise from America’s leading racist commentators including Ann Coulter, Pamela Geller, and former KKK leader David Duke.

Learning to Love the War on Terror

Earlier in July this year in an interview Blumenthal declared: “The [American] national security state has completely abrogated what should be its top mission, which is to take on these [anti-Assad] Sunni jihadist organizations which have repeatedly attacked soft targets in the West and caused chaos. They should be fighting them.”

These are the words not of a Leftist or “anti-imperialist”, but of a Westerner fully embracing the expansion of Bush, Obama and now Trump’s “War on Terror”, with a specific remit to target Sunnis. With a healthy dose of sectarian hypocrisy, a longstanding defender of the designated Shia terrorist organisation Hezbollah has openly called for the expansion of Trump’s bombardment of civilians in the Middle East.

What Blumenthal fails to disclose is that this campaign is already firmly under way and has already seen civilian deaths jump from 80 per month under Obama to 360 per month under Trump. As well as openly supporting the Russian-backed offensive against Aleppo, which was labelled a war crime by the UN, it seems Blumenthal is not opposed to the bombing of Syria as long as Assad’s enemies are the target.

The U.S. is bombing Syria, and the thousands of coalition air strikes carried out against ISIS in favour of pro-Assad militias around Palmyra or Deir ez-Zour or against al-Qaeda-affiliated opposition militants in Idlib or Aleppo prove this, however Blumenthal’s loudest protests are saved for Assad’s air bases, not Trump’s coalition bombing civilians in mosques. It is no coincidence that during the campaign trail Benjamin Norton endorsed Trump’s foreign policy, sentiment that was also echoed by mainstream backer of AlterNet’s pro-Assad crowd Glenn Greenwald.

An Anti-Imperialist Vindication of Imperialism

The sectarian rot of these bloggers isn’t even particularly well hidden, as evidenced by Benjamin Norton’s faux-media outrage over the use of the word ‘stronghold’. When it comes to Beirut and Hezbollah, Norton is enraged by the use of the word stronghold to describe areas under its control, however in Idlib, the entirety of the population is reduced to a ‘stronghold’ belonging to a terrorist organisation.

This kind of language is deliberately used by these bloggers exclusively to dehumanize Syrian civilians, and on this issue, these far-left activists have found ideological kinship against “manufactured liberal hysteria” with the most reactionary elements of the far-right.

While these supposed leftists continue to present themselves as “anti-war” or “anti-imperialist”, they are in fact acting as full-time advocates for Russian and Iranian military imperialism in Syria and to provide them immunity in the American public square from war crimes charges. This American far-left: far-right coalition on Syria looks set to keep flourishing, on the backs of millions of almost exclusively Syrian Sunni Arab victims, whom they’ve thrown to their eager Assad-supporting predators.