Can US-Mexico Relationship Be Saved from Trump? 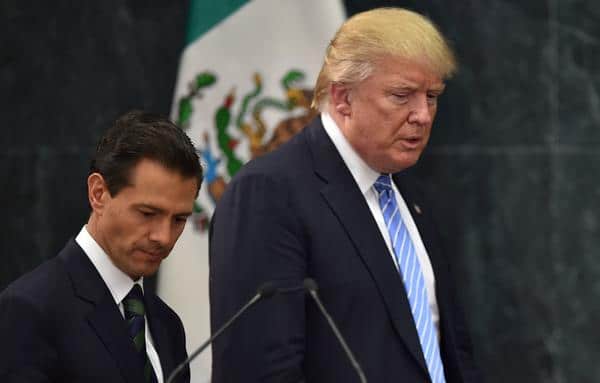 Since Donald Trump took office in January, relations between the US and Mexico have been unsettled. As one of his first actions in office, Trump issued an executive order to build an “impassable physical barrier” along the US-Mexico border, declaring that Mexico would pay for its construction. Soon after this announcement, Mexican President Enrique Peña Nieto cancelled his official visit to the White House, which had been intended to congratulate Trump on his election and to show the goodwill of Mexico, its people, and its government towards the new US administration.

The initial diplomatic disagreement set the tone for ensuing engagements, as the Trump Administration tried to disengage the US from global affairs through the reduction of international commitments, especially those related to the protection of the environment, and the promotion of socio-economic development, and increased trade and investment –which are all core issues on the US-Mexican agenda.

But contrary to the oft-projected image, the national governments are not the only actors setting and working on this agenda. For the most part, bilateral efforts over the environment and socio-economic development along the US-Mexico border are undertaken by the Border Environment Cooperation Commission and the North American Development Bank. A third institution, the North American Commission for Environmental Cooperation, undertakes similar efforts at the regional level, bringing Canada into the work of preventing and addressing environmental problems and of promoting sustainable development.

From their establishment in 1994, under the side and parallel accords to the North American Free Trade Agreement, these organisations have developed a strong record as “meaningful and useful tools” for developing, maintaining, and expanding the scope and breadth of trilateral and bilateral cooperation. Their achievements include:

§ The provision of $2.81 billion (as of early 2017) for constructing and improving environmental infrastructure on the US-Mexico border, with a 94% rate of successful completion of projects.

§ The promotion, enforcement, and compliance with domestic environmental laws in the three countries through the North American Agreement on Environmental Cooperation’s citizen submission procedure.

§ The processing of more than 90 submissions, between 1994 and 2017, by individuals and civil society organisations through the North American Commission for Environmental Cooperation, mostly resulting in either moderate or significant changes to governmental policies or private sector practices which would have negatively affected local and/or North American environments.

§ The creation, operation, and management of a North American Fund for Environmental Cooperation to support community-based projects, promoting awareness and understanding of the link between cross-border economic exchanges and the preservation of the region’s environment. Between 1996 and 2004, the NAFEC awarded almost 200 grants for a total value of more than $9 million. In 2010, the programme was revised and updated, and became the North American Partnership for Environmental Community Action, which has awarded $7 million USD to projects creating “a shared sense of responsibility” between individuals and nongovernmental organisations for the protection of the North American environment.

The CEC, BECC, and NADB are regional rather than supranational institutions. Consequently, none of them possesses the powers, autonomy, or human or material resources to force governments into complying with their domestic laws or regional agreements aimed at protecting the North American environment. However, they have able to expand their scope by interpreting their mandates broadly. At times, they have even managed to expand their authority beyond the provisions stipulated in their founding agreements.

For instance, when the NADB recognised the urgent need for constructing and improving environmental infrastructure in the US-Mexico border area, especially on the Mexican side, it engaged with the US Environmental Protection Agency to locate and establish appropriate mechanisms for channelling funds to projects in Mexico. The EPA was unable to provide funds through direct transfers to Mexico, as these would have qualified as foreign aid provision, subject to review by the US Congress. Instead, the EPA courted controversy through the partial funding of projects in Mexico through NADB, asserting that without US investment in Mexican wastewater infrastructure, the bodies of water along the shared border would become extremely polluted and present health risks to people on both sides. Meanwhile, the NADB lobbied the Mexican and US federal and state governments to expand the geographic area in which it operates from 100 km north and south of the US-Mexico border to 300 km to the south. Both initiatives were successful.

The entrepreneurial attitude of the regional institutions has implemented the provisions of the NAFTA’s environmental agreements in ways which could not have been achieved by rigid and passive bilateral cooperation mechanisms and structures. But, despite this achievement, the institutional budgets have been reduced by national governments, compromised operations and ability to fulfil mandates amid increased needs for funding of infrastructure projects. The failure to provide adequate funds under the Obama Administration put capacities in question and this is likely to worsen under Trump and a Republican-controlled Congress.

The lack of familiarity with these organisations has shielded them from some of the negative attention — and thus proposed cuts — cast upon other environmental agencies in the US, such as the EPA, and US-backed international programs. But the institutions and their officials are not counting on this hiding in the shadows.

In February, Representative Ruben Hinojosa (D-Tex.) introduced the North American Development Bank General Capital Increase Authorization Act to appropriate $1.5 billion from the US Government to fund the Bank’s activities and projects. Mexico has already confirmed that it will provide matching funding. It is a long shot: according to GovTrack and Spokos Labs the bill has only 1% chance of being enacted.

Mexico has taken up the challenge of the continued existence and operation of the North American institutions. In March 2017, Gerónimo Gutiérrez Fernández, the former Managing Director at the NADB since 2010, was appointed as Mexico’s Ambassador to the US. Gutiérrez Fernández notes that national “governments are careful — even reluctant — to broach the creation of new international institutions, especially if they imply money, permanent staff and physical offices”. He considers that “the manner in which both governments approach their shared challenges in the border region is reflected in the overall bilateral agenda and frequently shapes public opinion on the bilateral relationship”.

Anticipating the changed context, the NADB’s and BECC’s Boards of Directors have decided to secure the future of the two institutions by merging them by the end of the year. The boards have already appointed the first chief environmental officer of the new institution, which will continue under the name North American Development Bank.

Members of the Commission for Environmental Cooperation, the most prominent North American environmental institution, are also responding. Eric Dannenmaier –the recently-elected Chair of the CEC’s Joint Public Advisory Committee, says: “I trust that Mr. Trump has the insight to take regional trade and environmental concerns seriously, and to recognise that the social issues he championed as a candidate are best managed through careful research, respectful dialogue and close cooperation.”

The risk is that such trust is misplaced. Trump’s negative comments about NAFTA and US-Mexico (and now on occasion US-Canada) cooperation suggest that the North American cooperation and institutions will be reviewed in their entirety and most likely defunded by the US. Dannenmaier and Gutiérrez Fernández may reach out to environmental officials of the Trump administration. But with a US President set whose campaign ran on the promise of abolishing the EPA, it is uncertain whether anyone will be on the other side of the table.