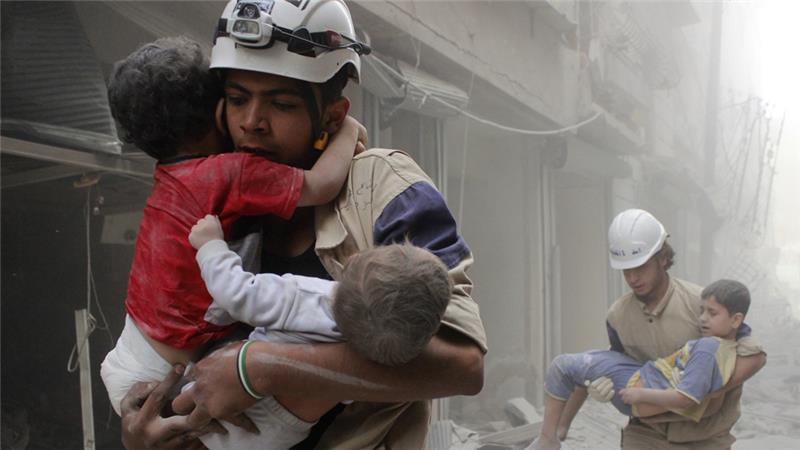 “If no one — not even a first responder — is worth saving in Syria, it makes it awfully easy to justify killing them.”

Writing for Wired, Emma Grey Ellis complements our article exposing the pro-Assad propagandists, “anti-imperialists”, and conspiracy theorists trying to destroy the reputation of Syria’s White Helmets, the rescuers who have saved more than 90,000 lives:

Syria Civil Defense is a volunteer corps of 3,300 first responders, fighting a losing battle in a devastated nation. You’ve likely seen its members—known as White Helmets—in photos on social media, carrying dusty, injured children out of bombsites. They’ve saved nearly 100,000 Syrians who otherwise would have been fatalities of the country’s ongoing civil war. They were nominated for a Nobel Peace Prize last year.

And simply by listing those facts, this story has become “fake news”.

While the White Helmets might seem like the poster children for feel-bad humanitarianism, they’ve in fact become the target of a internet smear campaign, one designed to bolster the regime of Syrian president Bashar al-Assad and undermine its opponents, including the United States. Various White Helmet “truthers” — who range from Assad and his supporters to Russian embassies, and even to Alex Jones — accuse the group of staging rescue photos, belonging to al Qaeda, and being pawns of liberal bogeyman George Soros. The story of how that conspiracy grew is a perfect distillation of how disinformation can spread unchecked, supplanting fact with frenzy where no support exists.

Start With Lack of Information

Like any conspiracy theory, this one feeds on ignorance. Most outside Syria only know the conflict’s broad strokes, and thus have little reason to doubt seemingly authoritative sources. “Disasters are an opportunistic social media moment,” says Brian Houston, director of the Disaster and Community Crisis Center at the University of Missouri. “If you heard about a storm and you saw someone tweeting pictures of a tornado, why wouldn’t you believe it was the right one?” That presumed trust provides the perfect growth medium for disinformation, like when Reddit erroneously treated an art project like a news dispatch.

It also gives bad actors fertile ground to sow disinformation—actors like ISIS, which has already leveraged the power of shareable content. “Jihadists are translating their core ideas into pictorial memes, like the one-finger salute that stands for the oneness of God and the destruction of the West,” says Jytte Klausen, who teaches courses on terrorism and international relations at Brandeis University. In the war for hearts and minds, a photo beats a big block of text any day.

But in the cast of the one-finger salute, it’s also a prime opportunity for fueling a conspiracy theory. After all, you see even non-ISIS members raising a single finger all over the place. Like, say, Obama. Or even the White Helmets:

First, though, let’s go back to the beginning. Syrian and Russian pro-Assad groups first seeded the brouhaha by suggesting that White Helmets were faking photos of the bombing victims they rescue.

[Editor’s Note: This graphic is the work of Australian “academic” Tim Anderson, one of the leading disinformation outlets on the White Helmets.] 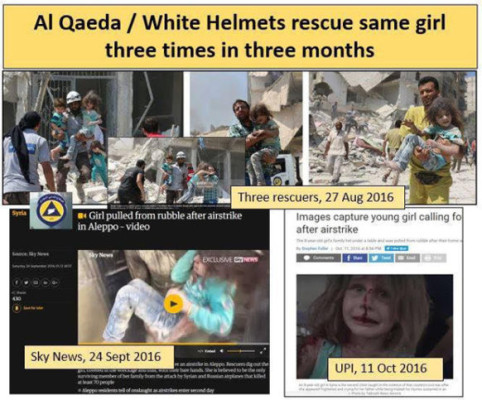 These images went viral after a pro-Assad reporter who often writes for Kremlin-sponsored RT claimed that the White Helmets were “recycling” victims to make the Assad regime look bad. (The claim has since been debunked.) Still, facial comparisons—especially low-res photos of people covered in dust—remain a powerful propaganda tool. “People think images are a language they automatically understand,” Klausen says. “But they often get it wrong.”

From Al Qa’eda to NATO

The next link in the chain came courtesy of Assad himself. “White Helmets are Al-Qaeda members and that’s proven on the net,” Assad told RT. White Helmets do operate in areas controlled by Islamist group Jabhat Fateh al-Sham, which used to be a division of Al-Qaeda, but claims of any connection between the two groups have also been debunked.

Yet, the connection lingered. Even the Russian Embassy got in on the act.

And once Russia was able to soften the outcry against their own pro-Assad military involvement in the Syrian civil war, the next step was to use the White Helmets to destabilize the image of NATO. In a trailer for the 2016 Netflix documentary The White Helmets featured, this clip appears:

“To save a life is to save all of humanity” is a Koran verse that Syria Civil Defence often cites as a guiding principle. However, the website 21st Century Wire, which was founded by a onetime Infowars editor who also contributes to RT.com, overlaid fake subtitles on a screenshot from the clip to create a new message:

The fact that NATO has been consistently anti-Assad and pro-sanctions against Russia makes clear why Assad and Putin supporters might want to connect the White Helmets with NATO—but when a US-based website propagates that link, it also raises the specter of a far-right classic: the great globalist conspiracy. Enter Alex Jones’ Infowars, which claims that not only are the White Helmets potentially responsible for the recent sarin gas attack, but also linked to George Soros. (Liberal billionaire Soros, according to many corners of the far-right internet, is actually a nefarious Jewish puppet master trying to sell out the average American.)

Thus closeth the loop: From al-Qaeda to NATO to George Soros. All of which has created a wholly unfounded cloud of doubt over the organization. “I have seen people uninvolved in the Syria conflict calling them ‘the controversial White Helmets,’” says Joey Ayoub, Middle East editor for Global Voices, who has worked with the White Helmets. “That in itself is a victory.”

Even if only semantic, allowing that doubt to linger justifies not only Russia’s support of Assad, but also its pro-Assad military tactics—which includes targeting the White Helmets themselves. “Russians have used the ‘double tap’ strategy against the White Helmets,” Ayoub says. “They bomb an area, wait a certain amount of time until the first responders come, and bomb it again.”

That’s war. That’s terrible. And that’s what the White Helmet controversy is distracting from. Questioning everything on the internet is a good axiom, but only when people question accusations as much as they do adulation. If no one — not even a first responder—is worth saving in Syria, it makes it awfully easy to justify killing them.