Syria Daily: Russia Threatens US But Then Backs Away 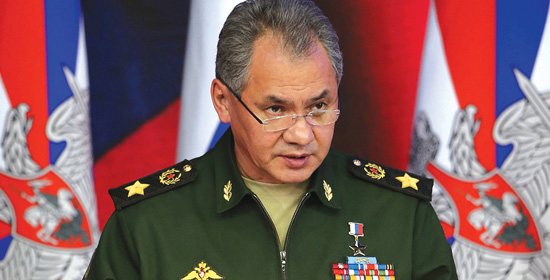 UPDATE 1545 GMT: The US air force has shot down another armed drone in eastern Syria, the third pro-Assad warplane downed in less than weeks.

Two US officials said a F-15E fighter jet shot down the Iranian-made Shahed 129 drone on Monday night near the Free Syrian Army base at Tanf near the Iraqi and Jordanian borders.

The US-led coalition confirmed the incident, saying the armed drone was downed “after it displayed hostile intent and advanced on Coalition forces” that “were manning an established combat outpost to the northeast of al-Tanf where they are training and advising partner ground forces in the fight against ISIS”.

The officials said the drone was downed just outside the 55-km (34-mile) exclusion zone.

The drone is the same type that was shot down on June 8 after it dropped a “dud” munition near a patrol being carried out by US troops and rebels.

ORIGINAL ENTRY: Responding to the first shootdown of an Assad regime jet fighter by the US, Russia has threatened American warplanes — only to soon back away.

On Sunday, US F-18s downed the Russian-made Su-22 jet as it was attacking Kurdish-led Syrian Democratic Forces near Tabqa in northern Syria. The strike came as a pro-Assad offensive entered western Raqqa Provice and neared the frontlines of the SDF, who have been pushing back the Islamic State and are now pursuing a final assault on the city of Raqqa, ISIS’s central position in Syria.

The Russian Defense Ministry responded on Monday with the announcement that it is terminating its communications channel with the US for “deconfliction” in Syrian airspace, established soon after Moscow’s military intervention in September 2015. The Ministry then declared “a cynical violation of Syria’s sovereignty”, “a flagrant violation of international law”, and “actual military aggression” before warning:

Any aircraft, including planes and drones of the international coalition, detected in the operation areas west of the Euphrates River by the Russian air forces will be followed by Russian ground-based air defense and air defense aircraft as air targets.

However, the Russians soon stepped back from the prospect of the first direct confrontation with US forces in Syria’s 75-month conflict, saying that the US warplanes would be “escorted” rather than “targeted”.

A Pentagon spokesman, Captain Jeff Davis, insisted, “We will not hesitate to defend ourselves or our partners if threatened.” However, a Baghdad-based spokesman for the US-led coalition, Colonel Ryan Dillon, indicated that the US would avoid sorties west of the Euphrates:

As a result of recent encounters involving pro-Syrian regime and Russian forces, we have taken prudent measures to reposition aircraft over Syria so as to continue targeting ISIS forces while ensuring the safety of our aircrews given known threats in the battlespace.

The head of the US Joint Chiefs of Staff, General Joseph Dunford, also played down Moscow’s announcement by maintaining that there are still communications between a US air operations center in Qatar and Russian forces on the ground in Syria: “We’ll work diplomatically and military in the coming hours to re-establish deconfliction.”

The US military also revealed that it came close to downing a regime Su-22 on June 8, this time near Free Syrian Army positions in eastern Syria. Officials said that, hours after American warplanes downed an armed Iranian-made drone, the Su-22 threatened the rebels but was chased away. They said that the US jet fighters did not fire because the regime pilot dropped his bombs in the desert.

The prospect of confrontation has been building between pro-Assad forces and the FSA because of a regime offensive that has neared the Free Syrian Army base at Tanf, near the Iraqi and Jordanian borders. The US, which has special forces on the base, has declared a 55-km (34-mile) exclusion zone and has struck pro-Assad units — including Hezbollah and Iranian-led Iraqi militia — three times in the past month as they tried to establish positions inside the zone.

The escalation of hostilities among the many factions that are operating in this region doesn’t help anybody. And the Syrian regime and others in the regime need to understand that we will retain the right of self-defense, of coalition forces aligned against ISIS.

Two White House officials are pressing for the US to go on the offensive in southern Syria, according to “two sources familiar with the debate”.

The sources said Ezra Cohen-Watnick, the senior director for intelligence on the National Security Council, and Derek Harvey, the NSC’s top Middle East advisor, are pressing for a challenge to pro-Assad units as well as the Islamic State.

But Defense Secretary James Mattis has personally blocked the proposals more than once, according to the sources. Mattis is reportedly backed by military commanders and top US diplomats as well as some White House officials. They object that an offensive could draw the US into a confrontation with Iran, risking retaliation against American troops in Iraq and Syria.

Instead, Mattis, Joint Chiefs of Staff Chairman Joseph Dunford, and Brett McGurk, the envoy for the fight against the Islamic State, all favor the focus on pushing ISIS out of Raqqa.

One official said, “That’s the strategy they’ve signed off on and that’s where the effort is.”

A local pro-opposition source said “regime forces got a good beating today on all Daraa fronts”.

Pro-Assad forces try to regain territory in Daraa city, supported by more than 1,200 bombs, missiles, and elephant rockets in the last three weeks, but rebels have held their lines and taken territory outside the city.

In its latest quarterly report, Siege Watch estimates 879,320 people trapped in at least 35 communities and 1.3 million more under threat in “watchlist” areas.

The Assad regime and its allies are responsible for the vast majority of the sieges, with the notable exception of the Islamic State’s ongoing encirclement of an estimated 72,000 people in Deir ez-Zor Province in eastern Syria.

Three communities capitulated to the Assad regime and allies such as Hezbollah and Iran between February and April — al-Wa’er in Homs city and Madaya and Zabadani in Damascus Province. Al-Fu’ah and Kafraya in Idlib Province gave way, in a twinned agreement with Madaya and Zabadani, to rebels.

Since the period covered by the report, the Damascus suburbs of Barzeh and Qaboun have surrendered to the pro-Assad sieges and bombardment. An estimated 420,000 people in the East Ghouta area are still at risk.