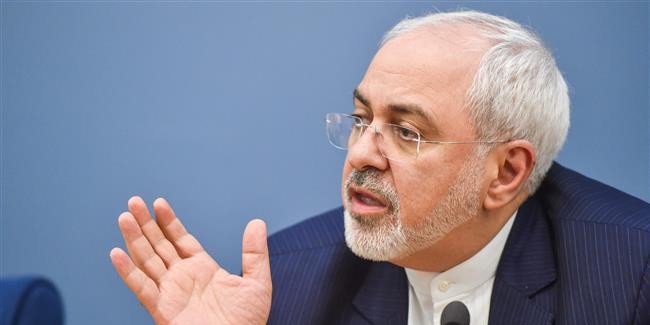 Iranian officials spent Monday cheering their first missile strike inside Syria in the 75-month conflict, asserting that terrorism and extremism had been uprooted as dozens of Islamic State fighters were killed.

Iran’s six Zulfiqar missiles, launched from the west of the country and landing in Deir ez-Zor Province in eastern Syria, were soon overshadowed by a possible Russian-American confrontation over the first US downing of an Assad regime warplane.

See Syria Daily, June 19: Russia Threatens US But Then Backs Away

But Foreign Minister Mohammad Javad Zarif (pictured) said, almost two weeks after attacks in Tehran on the Parliament building and the mausoleum of Ayatollah Khomeini, the founder of the Islamic Republic:

The Supreme Leader said in a Ramadan address and ceremony for children of Iranians killed in Syria, “Know that they can never bring us down, but that we will bring them down!”

The Revolutionary Guards asserted that 50 ISIS fighters, including several high-ranking commanders, were killed by the strike on the town of Mayadin.

Beyond the official line of a response to the June 7 attacks in Iran, which killed 17 people and were claimed by the Islamic State, Iran is also showing strength as tensions rise in eastern Syria. Three times in the past month, US warplanes have struck pro-Assad forces — including Hezbollah and Iranian-support Iraqi militias — trying to advance inside a 55-km (34-mile) exclusion zone around a Free Syrian Army base near the Jordanian and Iraqi borders.

The US, which has special forces at the Tanf base, is concerned about Iran’s establishment of a ground route for military supplies and personnel from Iraq into Syria.

Iran is denying the Saudi claim of the arrest of three members of the Islamic Revolutionary Guards Corps, following claims that the Saudi Coast Guard killed an Iranian fisherman in the Persian Gulf.

Riyadh said on Monday that it was questioning “three IRGC members, who were intending to carry out an attack on a major offshore oilfield in the Persian Gulf”. It said they “were on board a boat carrying a large number of explosives headed toward the Marjan oil field, located off the kingdom’s eastern shores between Saudi Arabia and Iran.”

Majid Aqa-Babaei, a high-ranking official at the Interior Ministry, responded, “Saudi Arabia’s claim about the arrest of Iranian military forces is not true.”

But Aqa-Babaei confirmed in a separate interview that three Iranians had been taken into custody. He claimed all were fishermen.