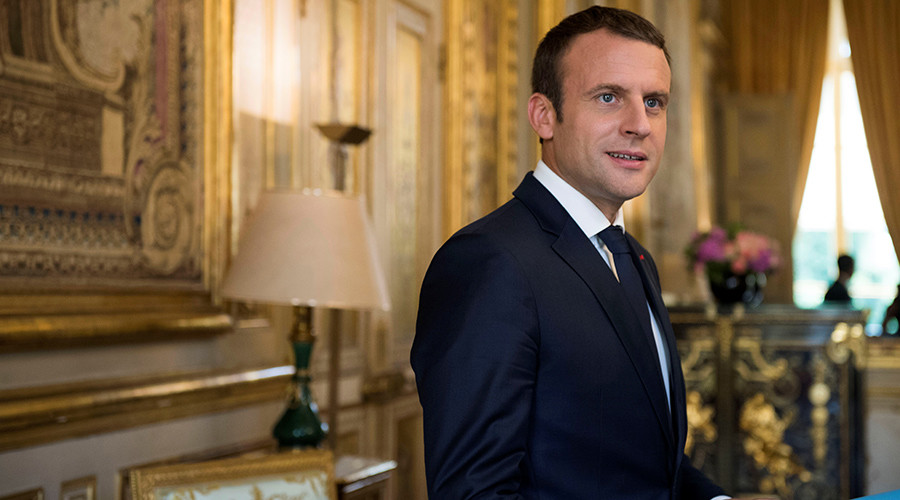 Macron: “I have not stated that Bashar al-Assad’s departure is a pre-condition for everything because nobody has shown me a legitimate successor.”

Macron said on Wednesday that he sees no legitimate alternative to Assad. He added that while Assad is an enemy of the Syrian people, he is not one of France. And bringing the French policy in line with that of the US, he said Paris’s priority is fighting “terrorist groups” and ensuring Syria does not become a failed state.

In an interview with eight European newspapers, Macron said:

The new perspective that I have had on this subject is that I have not stated that Bashar al-Assad’s departure is a pre-condition for everything because nobody has shown me a legitimate successor.

My lines are clear: Firstly, a complete fight against all the terrorist groups. They are our enemies….We need everybody’s cooperation, especially Russia, to eradicate them.

France had insisted since 2012 on a political transition which would involve the departure of Assad, based on UN Security Council resolutions.

Macron did not mention the United Nations’ role in the interview.

On Tuesday, French Foreign Minister Jean-Yves Le Drian was in Moscow for meetings which he said could bring relations to a renewed “spirit of trust”.

Russian Foreign Minister Sergei Lavrov declared after seeing Le Drian, “We have a shared understanding that it’s important to resolve the Syrian crisis exceptionally through the inclusive dialogue and with active assistance from the international community and on the condition of absolutely relentless struggle with terrorist groupings.”

Macron said of Russian President Vladimir Putin, “I don’t think he has an unshakeable friendship with Assad. He has two obsessions, fighting terrorism and avoiding a failed state, and so that’s why convergent views on Syria appear.”

The French leader, elected in early May, did draw a line against the Assad regime’s chemical attacks, supporting the US airstrike in April on the base from which a nerve-agent attack was launched, killing at least 93 people and wounding almost 600 in Khan Sheikhoun in northwest Syria.

“The use of chemical weapons will see a response, including by France alone. France will therefore be completely aligned with the United States on this,” Macron said.

Turkey says it has a promise from US Defense Secretary James Mattis with American weapons given to the Kurdish militia YPG will be taken back after the Islamic State is defeated.

The Turkish said Mattis made the promise in a letter to Turkish counterpart Fikri Işık, adding that the US will provide monthly a list of weapons provided to the YPG.

The YPG is the leading element in the Syrian Democratic Forces, who have been pushing back ISIS since late 2015 and are now pursuing a final offensive to take the city of Raqqa.

Last month Donald Trump formally endorsed the US arms supply to the SDF, established soon after the force’s creation.

The Turks also said they have a promise from Mattis that Arabs make up 80% of the forces in the Raqqa offensive.

The Kurdish-led Syrian Democratic Forces are close to encircling the city of Raqqa, the Islamic State’s central position in the country, after an advance on Wednesday.

The US-backed SDF claimed it moved into the suburb of Kasrat al-Farj along the southern bank of the Euphrates River. It is now 2 km (1.25 miles) from taking the entire bank.

The SDF launched the final offensive two weeks ago, entering Raqqa from both the west and east after airstrikes destroyed the bridges connecting the Euphrates to the center of the city.