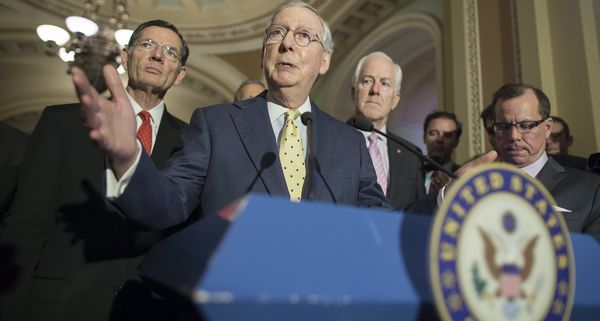 Developments on Day 153 of the Trump Administration:

Senate Republicans plan to release their version of the bill to repeal and replace ObamaCare.

The bill, drafted in secret by 13 male Senators with no public hearings, will cut federal Medicaid funding, repeal taxes on the wealthy, and eliminate funding for Planned Parenthood.

The Senate proposal largely mirrors the American Health Care Act passed by the House of Representatives in early May at the third attempt. However, there are notable differences.

The House legislation ties federal insurance subsidies to age, but the Senate bill links them to income, as with ObamaCare. The Senate proposal pulls back expanded Medicaid funding for states more gradually than the House bill, but it enacts deeper long-term cuts for low-income Americans.

The Senate version also removes the prohibition on federally-subsidized health plans from covering abortions, a provision which may have violated complex Senate budget rules.

Despite the changes, some moderate and conservative GOP Senators expressed concern and even opposition.

From the conservative side, Rand Paul declared, “My main concern is I promised voters that I would repeal — vote to repeal ObamaCare. And everything I hear sounds like ObamaCare-lite.”

Shelley Moore Capito said none of her concerns had been assuaged. Capito is from West Virginia, which has expanded Medicaid and wants a more gradual unwinding than many conservatives prefer.

“Up to this point, I don’t have any new news — tomorrow we will see it definitively — that would cause me to change that sentiment,” she said on Wednesday.

Some moderates also worry that, from 2025, the Senate version links federal spending on Medicaid to an even slower growth index than the one used in the House bill.

And there is uncertainty about whether the legislation will ensure coverage for those with pre-existing conditions. Senate Majority Leader Mitch McConnell said he wants to maintain protections, but some Senators said they were unsure of the provisions.

Trump: “I Don’t Want A Poor Person” In Charge of My Agencies

Seeking support — and respite from the pressure of the expanding Trump-Russia investigation — at a rally in Iowa, Donald Trump explains why “I don’t want a poor person” as the head of any of his agencies.

Remarkable clip from tonight where Trump explains why only rich people should be in charge of economic policy.

At his Iowa rally, Donald Trump suggests an immigration measure, apparently not realizing it has been in place since 1996.

“The time has come for new immigration rules which say that those seeking admission into our country must be able to support themselves financially and should not use welfare for a period of at least five years,” Trump said.

But the Personal Responsibility and Work Opportunity Reconciliation Act, passed during the administration of Bill Clinton, established that an immigrant is “not eligible for any Federal means-tested public benefit” for 5 years from the date the immigrant enters the country.

The law has some exceptions such as certain medical assistance, “in-kind emergency disaster relief”, and public health aid for some vaccines.

Former high-ranking US officials testify about the extent of Russia’s interference in the 2016 election.

Jeh Johnson, the head of Homeland Security from 2013 to 2017, said, “The Russian Government, at the direction of Vladimir Putin himself, orchestrated cyberattacks on our nation for the purpose of influencing our election. That is a fact. Plain & simple.”

Ex-DHS Sec.: Russians, at the direction of Putin himself, cyberattacked the US to influence 2016 election. “That is a fact. Plain & simple.” pic.twitter.com/ZayDreTnT3