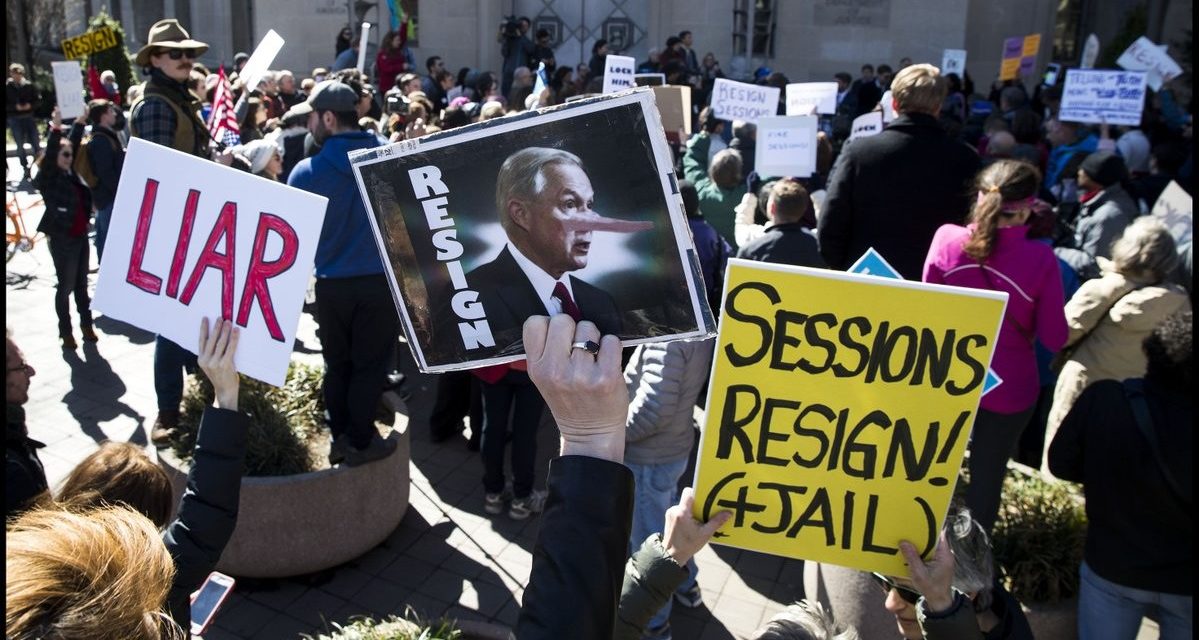 Developments on Day 142 of the Trump Administration:

Sessions: I Will Testify Before Senate Intelligence Committee

Attorney General Jeff Sessions says he will testify before the Senate Intelligence Committee on Tuesday about alleged links between the Trump Administration and Russian officials.

It was unclear whether Sessions, who was involved in the Trump campaign as he spoke with Russian Ambassador Sergei Kislyak in 2016, will speak in public or in closed session.

The Attorney General wrote on Saturday:

Some members have publicly stated their intention to focus their questions on issues related to the investigation into Russian interference in the 2016 election, from which I have recused, and for which the Deputy Attorney General appointed a special counsel.

The Senate intelligence committee is the most appropriate forum for such matters, as it has been conducting an investigation and has access to relevant, classified information.

Sessions’ move appears to have been prompted by Thursday’s testimony of former FBI Director James Comey to the Senate committee. Comey hinted in his answers that the Attorney General may now be a subject of Special Counsel Robert Mueller’s inquiry. Sources said Comey, fired by Donald Trump last month over the investigation, went farther in closed session: he told Senators that Sessions had a third, undeclared contact with Kislyak last year, with US investigators learning of the encounters from intercepts of Russian-to-Russian conversations about the meeting.

Sessions recused himself from overseeing the inquiry in March after his first two meetings with the Russian Ambassador were revealed.

The Department of Justice appointed special counsel to assume responsibility for this matter. We will allow him to do his job. It is unfortunate that anonymous sources whose credibility will never face public scrutiny are continuously trying to hinder that process by peddling false stories to the mainstream media. The facts haven’t changed; The then-senator did not have any private or side conversations with any Russian officials at the Mayflower Hotel.

Eric Schneiderman’s office confirmed the inquiry into potential violation of state laws after reports that Donald Trump’s foundation turned $100,000 in donations, meant for St. Jude’s Children’s Research Hospital, into revenue for the Trump Organization by using his son’s charity.

The money, made during an annual golf tournament hosted by Eric Trump, was allegedly funneled through the Eric Trump Foundation back into Donald Trump’s golf courses despite donors being told that all their money would go to charity.

More than $500,000 over 10 years has been re-donated to other charities, including charities connected to members of the Trump family, according to the claims. At least four of those charities also held charity golf tournaments at Trump golf courses.

Donald Trump reportedly gave the order himself for the Trump Organization to bill the Eric Trump Foundation for the money. If true, this would violate both New York state and federal law.

Senators tell Education Secretary Betsy DeVos that her budget request is dead on arrival in Congress, with both Republicans and Democrats defending programs proposed for cuts or elimination.

The Trump Administration’s draft budget slashes the Education Department to $59 billion from $68.2 billion. School choice programs, including vouchers and charter schools, will receive an additional $1.4 billion.

Roy Blunt, the GOP chairman of the Labor-HHS-Education Appropriations Subcommittee, said students would be hurt if programs that promoted career and technical education and helped the disadvantaged attend college are rolled back. He that, with regard to ending federal assistance to before- and after-school programs, it will “be all but impossible to get those kinds of cuts through this committee”.

DeVos insisted that the 22 programs cut in the budget are “duplicative, ineffective, or are better supported through state, local, or private efforts”.

Trump had resisted an affirmation during his May visit to NATO, defying his own senior advisors as well as the leaders of other members.

But Ramona Avramescu, a correspondent with Romania’s TVR News, extracted a statement — as Trump appeared in the White House Rose Garden alongside the Romanian President.

“Yes, absolutely I’d be committed to Article 5,” Trump said. “Certainly we are there to protect and that’s one of the reasons that I want people to make sure we have a very, very strong force, by paying the kind of money necessary to have that force.”

In his May 23 speech at a NATO ceremony, Trump did not deliver the line — inserted by advisors such as Secretary of State Rex Tillerson and Defense Secretary Jim Mattis — for an “unwavering” commitment to Article 5.

Trump’s stumble came as he took questions as a joint press conference with Iohannis in the White House Rose Garden. He said firmly, “We didn’t discuss it”, only for Iohannis to say equally robustly, “I mentioned this issue….It’s important for us. It’s important for Romanians coming to the US.”

Trump: "We didn't discuss it."

Romanian Pres: We sure didpic.twitter.com/Nh8dqyVvIH@ishaantharoor

Essential Reading: When Trump Testified Under Oath and Acknowledged 30 Lies

A flashback to August 2016, when David Fahrenthold and Robert O’Harrow wrote in The Washington Post of a 2007 deposition when Donald Trump “had to face up to a series of falsehoods and exaggerations”, including his businesses and his wealth:

For two straight days, they asked Trump question after question that touched on the same theme: Trump’s honesty.

The lawyers confronted the mogul with his past statements — and with his company’s internal documents, which often showed those statements had been incorrect or invented. The lawyers were relentless. Trump, the bigger-than-life mogul, was vulnerable — cornered, out-prepared and under oath.

Thirty times, they caught him.

Trump had misstated sales at his condo buildings. Inflated the price of membership at one of his golf clubs. Overstated the depth of his past debts and the number of his employees.

That deposition — 170 transcribed pages — offers extraordinary insights into Trump’s relationship with the truth. Trump’s falsehoods were unstrategic — needless, highly specific, easy to disprove. When caught, Trump sometimes blamed others for the error or explained that the untrue thing really was true, in his mind, because he saw the situation more positively than others did.